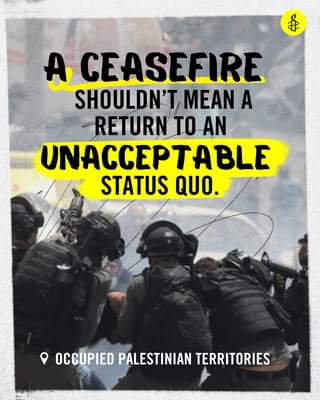 Hamas, whose original antisemitic and genocidal charter is still in effect, hailed Amnesty on its English language webpage: 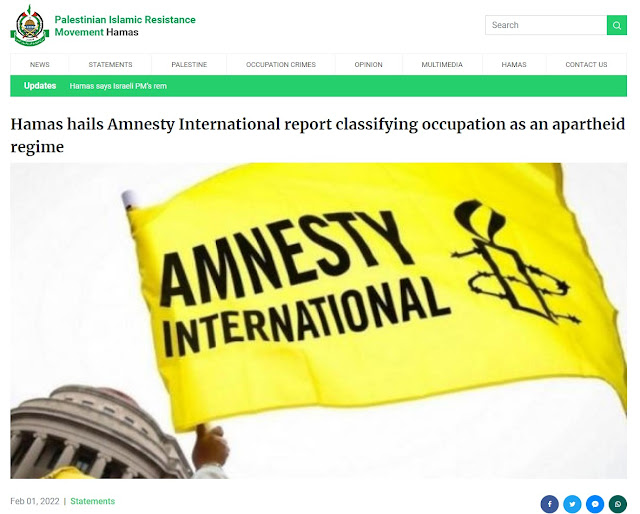 In its statement, Hamas considers Amnesty its partner in destroying the Jewish state:

Hamas considers the current Amnesty International report an essential and detailed part of the international and legal efforts that seek justice for our Palestinian people, who are facing the last barbaric racist occupation on earth, in legal efforts to end the Israeli occupation’s injustice.

The word “justice” is a dog-whistle that both Hamas and Amnesty understands to mean the dissolution of the Jewish state. Amnesty’s draft report said that Israel was born in sin, it modified that slightly in the released report, but it obviously believes it.
Islamic Jihad, even more radical than Hamas, also praised the report. So did Fatah and the Palestinian foreign ministry.
Perhaps the most important praise came from the PFLP. Remember, the PFLP  is linked to major Palestinian NGOs, and Amnesty supports them despite of  (or because of) those links with a terror group whose political platform supports murdering Jews. Amnesty considers the PFLP-linked groups to be allies and it has nothing negative to say about the PFLP members who lead some of these groups.
The PFLP, which is on the record saying that killing Jews in Israel is a human right, also embraces Amnesty International’s report. Remarkably, it described the exact game plan for the anti-Israel organizations to destroy Israel:

The Popular Front demanded the necessity of accumulating this event and exposing all the violations and crimes committed by the enemy against our defenseless people, leading to the trial of the occupation and the recognition of the crime of ethnic cleansing that took place against our people in 1948, on the way to ending its presence on our entire Arab Palestinian land.

The Amnesty report is part of a concerted, organized effort to give backing to the UN commission that will also declare Israel to be an apartheid state later in 2022, and that in turn is a precursor to putting Israel on trial at the ICC, with the aim of pressuring the world to withdraw recognition of Israel. Amnesty, HRW and the PFLP with its own NGOs are all part of the same Global Left.
And we are now seeing the fruits of the 2001 Durban Conference – an antisemitic conference that Amnesty participated in and bragged about years later.
Recall that in 2001, the NGO forum of the infamous Durban conference included this call in its final statement which was submitted to the UN:

We also call upon the UN to ensure the implementation of the various UN resolutions on the OPT including the withdrawal of the Israeli colonial military occupation, the right of return for refugees, and for the protection for refugees of the UN High Commission for Refugees until such time as they may be able to exercise their right to return and in accordance with UN resolution 194.
We also call for the repeal of all discriminatory laws within the state of Israel, including those of return and citizenship, which are part of the institutionalized racism and Apartheid regime in Israel.
We Call for the establishment of a war crimes tribunal to investigate and bring to justice those who may be guilty of war crimes including the crime of Apartheid which amount to a crime against humanity.
We also call for the establishment of a UN Special Committee on Apartheid and Other Racist Crimes Against Humanity perpetrated by the Israeli Apartheid regime to monitor and to report Apartheid and other racist crimes.
Finally we call upon the international community to impose a policy of complete and total isolation of Israel as an apartheid state as in the case of South Africa which means the imposition of mandatory and comprehensive sanctions and embargo and the full cessation of all links between all states and Israel.

This has been the blueprint of the Global Left for over twenty years. Amnesty’s report is only one small part of the entire strategy, and its recommendations in this report are remarkably similar to the recommendations of members of a conference where

This same conference saw people distributing this flyer, without a word of objection from Amnesty or the other “respected” human rights groups. 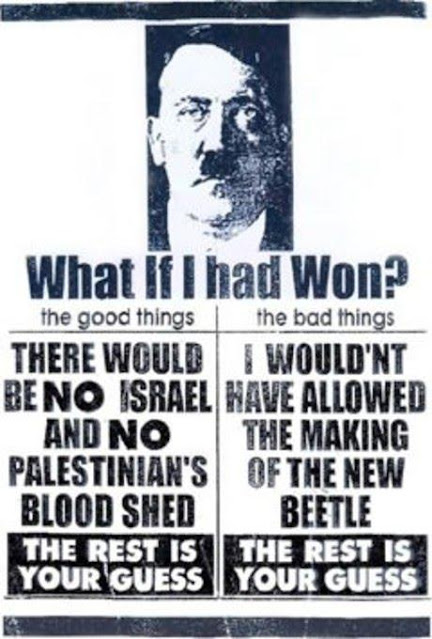 Amnesty didn’t decide to write this “apartheid” report now – it has been waiting 20 years to do it. And today’s Nazis are just as happy as the terrorist groups are.