The Economist reports that the birthrates of Israeli Jews has been rising and that of Arabs in Israel and the territories has been dropping – and the Israeli Jewish birthrate is bucking the trends around the world.

In short, the demographic bomb that was predicted for decades to destroy Israel has nearly fizzled.
But the article then touches on an important point that rarely makes it to the media.
Excerpts:

“If an Israeli woman has fewer than three children, she feels as if she owes everyone an explanation—or an apology.” That, at any rate, is the view of a leading Israeli demographer. When she visits London she is struck by its dearth of toy shops. Israelis have many more children than their counterparts elsewhere in the rich world. Whereas the average Israeli woman has 2.9, her British and French peers have 1.6 and 1.8 respectively.
Yasser Arafat, who led the Palestinians for three-and-a-half decades, described “the womb of the Arab woman” as his “strongest weapon”. Demographic projections used to suggest that Arabs living between the Jordan river and the Mediterranean would eventually outnumber Jews.
At the time there was indeed a wide demographic gap. In Israel itself Arab women were having almost twice as many babies on average as Jewish women. But in the past few decades this gap has disappeared, as the birth rate of Israeli Arabs has fallen while that of Israeli Jews has risen. 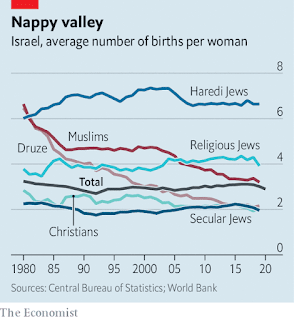 In 1960 the fertility rate of Israeli Arabs stood at 9.3. In the next 35 years it dropped by almost half, to 4.7, before sliding to 3.0 today (see chart). The birth rate of Palestinians in Gaza and the West Bank also declined, from 4.6 in 2003 to 3.8 in 2019. In this Palestinians and Israeli Arabs have followed a path trodden by women elsewhere. Across the OECD, a club mostly of rich countries, the average fertility rate has fallen from almost three in 1970 to 1.6, well below the rate of about 2.1 needed to keep a population from shrinking.

This makes the rising birth rate of Jewish Israelis all the more surprising. Between 1960 and 1990 their fertility declined from 3.4 to 2.6, suggesting they were in step with their sisters elsewhere. But then they began to buck the trend, driving the birth rate back up to its current level of 3.1.
Almost all this increase is caused by Israel’s growing number of ultra-Orthodox (or Haredi) Jews, who have a fertility rate of 6.6, more than double the national average and three times the rate of secular Jews. ….
But it is harder to explain why secular Jewish Israelis also have more children than the norm. Most work; paid leave for Israeli parents is not especially generous. Nor is child care cheaper than in other rich places. Some argue that Jewish Israelis make more babies because they foresee a rosier future: Israel ranks among the world’s top ten countries in happiness.
Another reason may be that the state encourages baby-making by, for instance, bankrolling fertility treatment. It subsidises in-vitro fertilisation to the tune of $150m a year. Tiny Israel has about the same number of frozen embryos as America. This may have only a slight effect on Israel’s birth rate, but it signals that the government wants its citizens to procreate.
One more explanation may be that Israeli grandparents tend to help out more than their peers in many other rich countries. Since Israel is small and densely populated, grandma is never far away. In one survey 83% of secular Jewish mothers aged 25-39 said they were supported by their child’s grandparents, whereas only 30% of German mothers said the same. In Israel the traditional family structure is still strong. In France and Britain more than half of babies are born out of wedlock. In Israel it is under 10%.

That last paragraph is the most important one.
Arabs and anti-Zionists pretend that Judaism is a mere religion. But it is so much more than that.
Jews are beyond a people, beyond a tribe.
We are family.
This is the fundamental issue that modern antisemites simply cannot grasp. It is that sense of family, of mutual responsibility, of a shared past and a shared destiny, that is the secret of Israel’s success and strength.
The entire reason for legendary Israeli rudeness and loudness is because one lets their guard down around family. Israelis will ask each other personal questions because that’s how one treats family.  Walking on eggshells to make sure people won’t be offended or react unpredictably is for strangers, not for relatives.
“Jewish geography” – the invariable start of a conversation between Jews from different places to find out who they know in common – is a game that only works for cousins.
Normal people, even the most altruistic, care more about their families than about others. It is natural. That is why Israel cares so much about the survival and future of the Jewish people.
The modern antisemites see this family dynamic and twist it into “Jewish supremacy.” That is a perversion.  It is nothing of the sort. It is the way that strong, functional families act. And it is a good indicator of how strong societies remain strong.
Strong families make better neighbors with others than disconnected individuals can, but they also circle the wagons together against threats. And this last sentence just explained Israel’s policy towards its Arab citizens and neighbors better than hundreds of academic papers and articles can.
Bethany Mandel had a great thread last week about the bonds between Jews. A slightly shortened version:

I was at the county fair today with all the kids and ran out of cash and don’t carry a bank card.   My kids were distraught and wanted more ride tickets. So I said “lemme go ask that Jewish guy if I can Venmo him for cash.” My kids were like WHAT you can’t just go up to a stranger and ask to bum cash. And I was like guys, he’s not just some guy, he’s a Jew. Watch me.    He went to the ATM, got us cash, I Venmo’d him in exchange, and they learned a valuable lesson about being Jews.
My kids don’t remember it, but I did this another time. I was on a full flight alone with three kids and had to use the bathroom. My older two were too young to hold the baby. So I got up, looked around, saw a Jewish guy four rows back in the middle seat, and handed him the baby. I came back and he was like oh, wait, I follow you on Twitter.  And everyone around him was like wait you didn’t know him…? I was like no. They asked why I trusted him.  I was like first off – where is he gonna go? Second, he’s a Jew. So he can hold my baby. They were ???.