Palestinian Authority Mahmoud Abbas, still acting as president in 2021 even though his term expired in 2009, said on June 29 that the entirety of Israel is a “foreign body” implanted in the Middle East as “a product of colonialism.” It is a world view he has been exporting and believes is being accepted, noting the “shifts in the world’s public opinion and at the level of parliaments towards reconsidering the Palestinian narrative,” and rejection of “the Zionist narrative that falsifies the truth and history.“

Abbas wrote his doctoral thesis on a particular form of Holocaust denial which asserted that Jews have no history in the land so no Jews had any interest in moving to Palestine. Consequently, Zionists conspired with the Nazis to make life unbearable in Europe so European Jewry would be forced to flee and settle in Palestine.


Abbas added that all of Israel is a fictional creation meant to “fragment [the Arab world] and keep it weak.” Still, the Palestinian Authority has shown a willingness to accept a portion of the Israeli colonialist settlement activity:

“Despite our acceptance of a painful historic settlement recognizing the State of Israel on the 1967 borders in accordance with United Nations resolutions 242 and 338 and the signing of the Oslo Accords in 1993, Israel has violated these agreements and continued to steal the land, establish settlements, and create an apartheid regime and ethnic cleansing by military force.” (Note that the Oslo Accords specifically stated that Israel controls Area C of the West Bank).

He concluded his remarks at the Al-Quds Open University in the Gaza Strip conference, which was meeting to create new distortions to foist on the world:

“The world has begun to see Israel as it is: an occupying and apartheid state. I am confident that the contributions of the researchers participating in this conference will have an important impact on clarifying and explaining the truth about the myths and false narratives of this Zionist project created by the Western countries for purely colonial purposes.“

Palestinians are spending considerable energy to reeducate the world on manufactured “facts” rather than acknowledging the basic history, dignity and rights of Jews. Sadly, universities like Yale and the City University of New York are using the Palestinian al-Quds University for source sheets in echoing calls to attack the Jewish State. 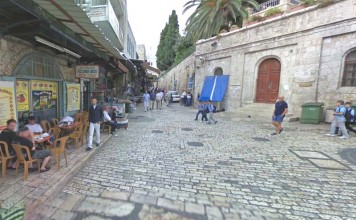