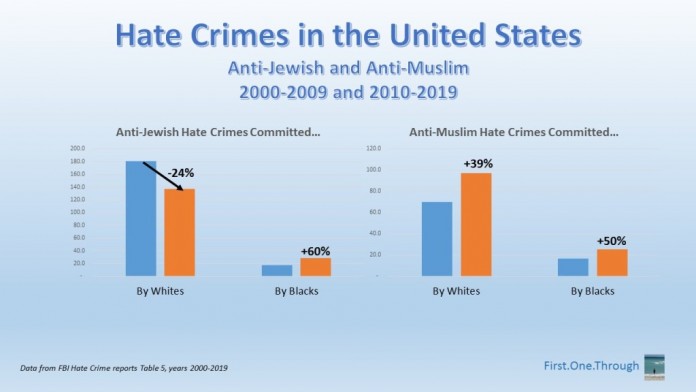 As the 20th anniversary of the 9/11 attacks on the United States approaches, various news outlets are discussing the animosity towards Muslims that became a reality in America after the terrorist attacks by nineteen Muslim men, directly killed nearly 3,000 people and many times that number indirectly in the years that followed. Other than giving a platform for American Muslims to talk about their experiences with prejudice, little analysis into the hate crime statistics has been shared.

So here it is.

The spike was immediate and significant.

In 2001, a total of 546 anti-Muslim hate crimes were reported, a 16.5 times jump from the prior year. White people committed 200 of those offenses, a high number relative to the 29 attacks committed by Black people. The numbers declined rapidly in 2002, but the number of anti-Muslim attacks has remained significantly above the pre-9/11 days.

Anti-Muslim attacks increased again with the influx of Muslim refugees from Syria and elsewhere in 2015 and 2016, reaching a high of 381 in 2016. The number of incidents declined significantly since then, with 219 attacks reported in 2019, a 43 percent decline in three years.

In regards to the perpetrators of the offenses, from 2000 to 2009, Whites committed an average of 69.9 attacks per year, compared to 16.8 for Blacks. The numbers increased for both groups in the 2010-2019 decade, with Whites and Blacks committing an average of 97.3 and 25.2 attacks, respectively, representing a jump of 39% for Whites and 50% for Blacks.

By way of comparison, Jews suffer many more hate crimes than Muslims but the trend line is quite different.

Attacks against Jews was consistently above 1,100 attacks per year through the year 2001. It was only in 2002 that anti-Semitic attacks began to decline, reaching a low of 635 attacks in 2014. This was a period marked by the War on Terror around the world, and in Israel, it included the Second Intifada/Two Percent War (2000-2005), the election of a Holocaust denier to the Palestinian presidency and a jihadist terrorist group to a majority of the Palestinian parliament (2005 and 2006) and wars from Gaza after the Hamas takeover of the Strip (2008, 2012 and 2014). Perhaps Americans sympathized with Jews and the Jewish State in the global war on Islamic extremism, as attacks on Jews declined significantly over those thirteen years.

But the trend reversed as anti-Semitism began to spike at the same time as anti-Muslim attacks picked up in 2015. Most recently, crimes against Muslims has been declining while anti-Semitism has been rising.

A review of the offenders perhaps reveals some clues.

The sharp increase in Black anti-Semitism came most recently in 2018 and 2019, with all-time record levels of attacks by Blacks on Jews. This coincides with the election of the “Squad” to Congress – and two Muslim women, Ilhan Omar and Rashida Tlaib, in particular – who pushed anti-Semitic tropes that Jews control the military, the press, the government and do it all as a means to profit from the poor. The ridiculous shouts of “from Ferguson to Palestine” shouted by the likes of CNN’s Marc Lamont Hill and “from Detroit to Gaza” shirts sold on Rashida Tlaib’s website, were malicious attempts to portray Jews as militant exploiters of Blacks and Muslims all around the world. Shockingly, Democratic leaders protected their anti-Semitic minority members and pushed anti-Islamophobia measures.

Not surprisingly, attacks against Jews increased and those against Muslims decreased.

In summary, there were almost no anti-Muslim attacks in the United States until the Islamic extremist attacks of September 11, 2001. The spike in anti-Muslim hate crimes went on for a year, and the situation then dramatically improved. That turnaround enabled American Muslims to assume positions of power in the United States, which they have used to further protect Muslims and fuel minority attacks against Jews.

Twenty years ago, foreign jihadists hijacked a small part of the U.S. transportation system to viciously attack America’s financial, military and political centers. Today’s jihadists are aggressively weaponizing the U.S. educational system, the government and the media, to attack Jews around the world.

David Duke, Ilhan Omar and the Three Lenses of Anti-Semitism

Criticizing Muslim Antisemitism is Not Islamophobia

{Reposted on the author’s blog}