Progressive and conservative people around the world have different interpretations of justice.

For progressives, justice is achieved by enabling people who have been marginalized to succeed. It seeks to even the playing field by affording those at the edges some advantages to address systemic roadblocks which kept them down for so long. Justice demands reform in various areas beyond economy and law, to include healthcare and the environment.


Conservatives view justice through a narrower lens of tradition and law. They appreciate order and security, and upholding historic truths. Justice demands a system which rewards or punishes risk and investment. It requires uneven outcomes in order to spur overall growth.

Zionism speaks justice to both.

Liberals rallied to Zionism after the Holocaust of the Jews in Europe. They saw systemic anti-Semitism commit a genocide of millions of European Jews in the 1940’s and then watched the Muslim world expunge its Jewry from 1948 through the 1970’s. A home where Jews could be safe and self-governing was clearly needed in the creation and building up of the Jewish State.

Conservatives were some of the earliest Zionists – even pre-dating the first Zionist Congress in 1897 – and continue to be strong supporters. They appreciate Jews’ 3,300 year-history in the land of Israel, and understand that “the promised land” is a religious term uniquely meant for Jews about that Jewish holy land.

Today, liberals see Israel as the most liberal country in the entire region, while conservatives understand the need for the small country to maintain a strong military in the face of hostile neighbors.

Progressives are amazed that a small new country was able to absorb immigrants fleeing persecution from dozens of diverse countries including: Morocco, Russia, Argentina, Uruguay, France, Tunisia, Egypt, Iraq, Syria, Ethiopia, Ukraine and Yemen. There is no country in the world that has such a high percentage of immigrants coming into the country – virtually penniless – from so many lands. None.

Conservatives are amazed at the stability and application of the law in Israel. While other countries in the region have killed hundreds of thousands in wars, the strong Israeli army has kept its wars very short, minimizing death tolls. While the authoritarian leaders of neighboring countries stay in power for decades, Israel holds genuine elections and prosecutes its leaders, sometimes sending former prime ministers to prison.

People from across the political spectrum may not know some statistics about Israel but aren’t surprised to hear them. For example, Israel is the only religious country which has more tourists each year from a different religion (the Jewish State has more Christian tourists than any other religious group; other religious countries like Denmark have mostly Christian visitors; Iran, mostly Muslim visitors).

Both progressives and conservatives marvel at the religious freedoms in the only Jewish State. Muslims may wear hijabs (banned in France), build minarets near mosques (banned in Switzerland) and have halal meat (banned in the Scandinavian countries). Anyone of any faith can become prime minister in Israel (only Christians can lead Greece, only Muslims in Syria). Israel even helped the Mormons build a church in Jerusalem! and the Baha’i have a major temple in Haifa (the faith is banned in Qatar).

Liberals love that Israel is a green country, leading the world in recycling plastic. It was the first country in the Middle East to have wind farms and a bike sharing program. It also has a universal healthcare system for every citizen and permanent resident. Meanwhile, conservatives love that the Jewish State has a thriving free market built on capitalism. It has more companies listed on Nasdaq than any other country except for China (a country with a population 155 times as large).

Israel has striven to build a country that incorporates freedom, justice and fairness in an open, secure and vibrant multi-cultural society, in the heart of a turbulent and extremist neighborhood.

When Israel declared itself an independent state in 1948, it called for justice instinctively understood by both progressives and conservatives:

“THE STATE OF ISRAEL will be open for Jewish immigration and for the Ingathering of the Exiles; it will foster the development of the country for the benefit of all its inhabitants; it will be based on freedom, justice and peace as envisaged by the prophets of Israel; it will ensure complete equality of social and political rights to all its inhabitants irrespective of religion, race or sex; it will guarantee freedom of religion, conscience, language, education and culture; it will safeguard the Holy Places of all religions; and it will be faithful to the principles of the Charter of the United Nations.”

David Ben Gurion signing the Declaration of Independence with Rabbi Yehuda Leib Hacohen in Tel Aviv, May 14, 1948 (photo: Hans Pinn/GPO)Israel was designed as a particular Jewish State, focused on Jewish immigration and a vision of peace based on the Jewish bible, but also with “complete equality of social and political rights to all inhabitants irrespective of religion.” The country’s foundational principles stressed both the particular and universal in a unique and bold ambition for justice for all: a space for the most persecuted minority in the world, and a philosophy of justice based on history, tradition, truth and fairness.

Progressive and conservative people around the world have different interpretations of justice, yet both see their visions realized in Israel.

A Native American, An African American and a Hispanic American walk into Israel…

Related First One Through music videos: 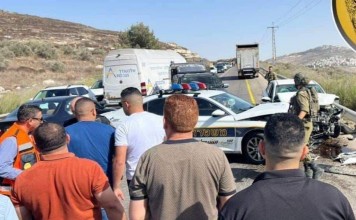