Unlike most of their American counterparts who remained holed up indoors, Israeli students who attended the AIPAC conference in Washington went outside and faced the anti-Israel activists fearlessly.

Security forces closed the main doors to the Washington Convention Center Sunday Sunday to protect some 18,000 attendees at the annual American Israel Public Affairs Committee (AIPAC) conference from hundreds of anti-Israel protesters outside.

Marc Prowisor, director of Security Projects for One Israel Fund and a resident of Shiloh in Samaria, refused to remain indoors.

‘Not One Ounce of Fear’

“I am so proud of my fellow Israelis, many of them recently released from the IDF, who didn’t stand behind the windows and police lines… Who went out to confront the Israel haters, who spoke with strength and dignity and showed them just who we are,” Prowisor wrote on Facebook.

“I went out,” he told this reporter in a telephone interview. “I’m seeing other Israelis there standing tall and proud. These Israelis, university students and some adults, have not one ounce of fear. The people around them could sense that and that they better not mess with them. It’s beautiful.”

After being interrupted briefly by a phone call from Israel from his son, an IDF soldier, Prowisor continued to explain that many American Jews “have been emasculated. Most of the American kids stayed indoors. A lot of them were afraid.”

Ryan Bellerose, a Native Canadian pro-Israel activist who also attended the conference, posted on social media: “I think I’m gonna go outside and say hello to the people who are so hate filled and irrational that they were screaming outright lies at everyone. I think it’s important to show that not only are we unapologetic, but that we are unafraid.”

The event was remindful of a similar situation in Toronto several years ago, when Jewish students remained locked inside the Hillel office in dire fear of approximately an equal number of anti-Israel anarchists threatening them. Police eventually escorted them out, but they were instructed – and obeyed the instructions – to keep their heads down. 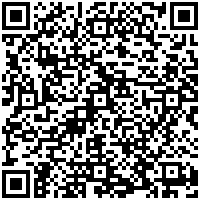