His kids call her ‘Momala’: Meet the Jewish husband of Biden’s pick for VP, A successful Biden-Harris ticket would make Doug Emhoff the first-ever second gentleman and first Jewish spouse of a US president or VP

As the first woman of color, first daughter of immigrants, and first Indian American to be on a major party’s presidential ticket, Harris’ election has been hopefully hailed as a prospective laundry list of firsts for the United States’ minorities. No one points out that this also make Harris’s husband the first Jewish spouse of a US president or vice president and the first-ever second gentleman.

Of all the nominees that Biden could have chosen, isn’t ironic that he chose a Black woman with a Jewish husband? No, it was no accident, G-d always has a backup plan, so that we can have free choice. While we have individual free choice, we are playing against the GrandMaster who knows what to do whatever our choices. If we go one way, G-d has another way to save the Jewish people. We learn this lesson from the scroll of Esther, the Purim story, in Hebrew is called, “Megillat Esther.” “Megillah” comes from the root word meaning, “revelation.” The name Esther is related to the Hebrew word for hiddenness. So Megillat Esther suggests “the revelation of hiddenness.”

We see this paradox illustrated throughout the events of the Purim story. The Jews of the Persian Empire are assimilating, (in many ways so are Jews of America now). The evil Haman decides to destroy the Jewish people, and proceeds to execute his plot, making his moves toward the final solution of the Jews. Today there is something called the “squad” in the Congress of today, Four Congresswomen who hope for the death of Israel The irony of the story of Purim, is that everything the evil Haman does to destroy us, destroys him-and saves us. By threatening our existence, Haman indirectly initiates a renewal in the Jews’ commitment to Torah, reversing the tide of assimilation which is always the greatest threat to Jewish survival. And Haman digs his own grave, or more accurately, builds his own gallows, for the gallows he had built to hang Mordechai are used for Haman’s own execution.

G-d has written a script, and we are the actors in that drama. The question isn’t whether we are going to play our parts, but how we will play our parts-whether consciously and willingly, or obliviously and with resistance. Whether we choose to work for G-d’s plan of growth, love, and oneness, or against it, is our choice.

Again, we see this illustrated dramatically in the story of Purim. Esther, who is secretly Jewish, has by a strange set of circumstances married the King of Persia. (Sounds like fate at work?) But soon after, Haman the Prime Minister begins to execute his plot to destroy the Jewish people. So Mordechai, Esther’s uncle, says to her: “We’ve got to save the Jewish people. Perhaps G-d has orchestrated things in this very manner so that you could be queen (or Husband in this case) and be in a position to save the Jewish people.”

But Esther isn’t convinced. She tells Mordechai, “You know the rules of the palace. If I go to the king without being invited, he could have me killed!”

To that Mordechai says something bizarre: “If you don’t do this, Esther, the salvation of the Jews will come from someplace else.”

What kind of argument is that? I mean, if you want to get somebody to do something what method do you use? Guilt! Mordechai should have said to Esther, “If you don’t do it, the Jewish people will be destroyed. This will be the end of Jewish history.” You are a Jew. ACT!

Instead, he says, “If you don’t do it, the Jews will be saved anyway, but you’ll lose out on the starring role.”

Mordechai was teaching Esther the secret of choice: In terms of G-d’s great plan, it doesn’t make a difference what you do. But in terms of your own life, it makes all the difference in the world. Do you want to actively, consciously participate in G-d’s plan, or not? If you don’t sign on, it will still happen. But you’ll lose out. You can be the star, or an extra on the set. That’s your choice.

And Esther decides to do it. The Jewish people are saved, with Esther in the starring role, because she chose to play her part.

Trump has been the greatest supporter yet of the Jewish people. His Presidency has been even more dramatic, because he comes after eight years of Obama, whose own Minister was a rabid Anti-Semite. He sat each Sunday listening to the Anti-Semite Minister spew Jewish hatred, and was a product of what he heard. How ironic that his vice-president who helped with Jew-hatred vision is now in the position of maybe becoming President himself. But G-d doesn’t take any chances. If this happens, we will have a Jew in the White House, in case needs him. Let’s pray for the best.

Bubbie Bayla was taking care of the kids for the weekend and she walked by her little granddaughter Rivkah’s room one morning to find her standing in the corner, reciting the Hebrew alphabet.

“What are you doing?” Bubbie asked.

“My teacher said that we’re supposed to daven every day,” said Rivkah. “But I can’t remember any of the prayers. So I’m just saying all the letters of the aleph-bet, and Hashem can put them together however he thinks best.” 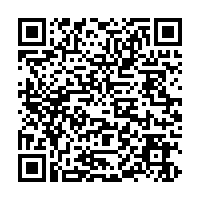