In his short essay, Polishism & Zionism: the Ironies of History, Philadelphian Tsvi Bisk, a self-described futurist (“the Jewish Future must replace a preoccupation with the Jewish Past“)  and author of a book entitled The Suicide of the Jews (due to “theocratic power, settlement authorization, and land idolatry, Israel may yet self-destruct“), deals with the influence Polish Nationalism had, as he sees it, on Zionism.


That resonates with me in a fashion. When I first started my MA at Hebrew University in the late 1970s, one of my research projects was the influence Polish nationalist education had on the cadre of senior underground commanders in the Irgun and Lechi, almost all being Polish such as Begin, Yellin-Mor, Shamir, Eldad and dozens of others. Oddly, he claims that Ben-Gurion also attended the University of Warsaw during “the most intense period of Polish Nationalism”. Ben-Gurion, of course, grew up in Plonsk, Russia, in lived in Warsaw for a year and a half, earning his living as a melamed, a teacher. I am not sure he attended its university. That was from 1904-1905. He did spend half a year at the University of Istanbul in Turkey, however, during 1912. Turkish nationalism could equally have influenced him.

He employs a ‘big’ word, synecdoche, to describe his term Polishism as being, because of the intense Catholicism of the country, analogous “in some ways to Hinduism and Judaism”. Italy, too?

He also asserts that “Jabotinsky was a great admirer of Polish Nationalism”. I am not that sure. He was quite circumspect about its anti-Semitism and ethnic nationalism. He may simply have realized its usefulness to assist his movement such as the Państwowy Urząd Wychowania Fizycznego i Przysposobienia Wojskowego program (State Office of Physical Education and Military Training) which afforded tens of thousands of Betarim the opportunity for physical and later, military training. In fact, the demographics of three million Polish Jews also played a part.

Of course, nationalisms have parallels of all sorts and degrees. Bisk points out that when Polish nationalism (he capitalizes the “n” consistently for some reason) adopted the principle of “Organic Work” (Praca organiczna), whose purpose was “to strengthen Polish society at the grassroots through education, economic development, and modernization”, that resembled the Practical Zionism of the Hibbat Zion movement of the 1880s. . The “Organic Work” approach evolved in the 1860s whereas, for example, Moshe Yehuda Leib Lilienblum’s foundational article appeared only in 1881 and Leon Pinsker’s Auto-emancipation in 1882, which would mean that possibly the resemblance was the other way around. True, it does not negate the mutual reflections between Zionism and Polishism. It just points to an inexactitude of how one relates historical facts.

There is then a jump to Jozef Piłsudski who was a proponent of the opposite approach, that of armed insurrection and revolutionary romanticism. He famously wrote: “Only the sword now carries any weight in the balance for the destiny of a nation.” Did Pilsudski influence Jabotinsky? Almost as much as Garibaldi and Mazzini, as Bisk posits? In his new book, Brian Horowitz seemingly agrees, to an extent but he sees Russia’s policy towards Poland as if it were Jabotinsky’s approach to the Arabs of Palestine as expressed in his famous 1923 Iron Wall. But it wasn’t but that is another argument.

Jabotinsky bought guns for Jewish self-defense in Odessa in 1903, participated in forming additional self-defence groups in 1905 and eventually assisted the formation of the Jewish Mule Corps and later, the Jewish Legion as well as commanding the Hagana in Jerusalem in 1920. He did not need the influence of Piłsudski. Bisk maintains that Jabotinsky “even suggested in a 1935 speech…that soil from Trumpeldor’s grave in Palestine be brought to Pilsudski’s grave as a symbol of the two national movements’ close relations.” That actually happened. 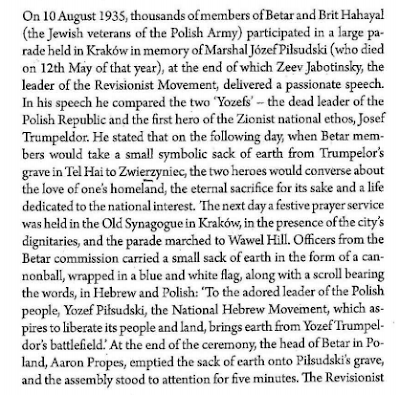 Bisk approvingly quotes Eran Kaplan who wrote, “…the founders of the Irgun were inspired by the example of Pilsudski’s military organization in Poland.” Raziel and Stern, however, were much more inspired by the IRA’s 1916 Uprising and so wrote about it in the “Metzudah” publication in the early 1930s in Mandate Palestine.

Piłsudski, of course, agreed to cooperate with Germany during the early stages of World War I as his main enemy was Russia while promising not to fight England. Did Jabotinsky adopt a similar policy or was he adamant in his undivided support for England then and almost until 1939?

“Pilsudski and other Polish Romantic Nationalists saw the Poles as a “‘chosen people’…to civilize the eastern Slavs, (much as some early Zionists saw their mission to civilize the Arabs and later the Middle Eastern Jews)”.

The concept of Lud Boży (People of God) saw Poland being destined to return to glory and self-imaged Poland, due to its political elimination and subjugation as a martyred nation, as a “Christ among nations”. That, I would think, is not the same as Judaism’s concept, even in a secular form. Is Bisk correct in this evaluation?:

Like Zionism, Polish Romantic Nationalism morphed into messianism…Polish messianists felt that nations determine the fate of humanity…Similar to the national religious wing of the Zionist movement, they sincerely felt that Polish national liberation was a prerequisite for universal salvation.

Or is he incorrect and misinterpreting, purposefully or otherwise?

It was Lynn White who, in 1942, coined the term “myth-history,” that a powerful myth can sustain dubious history. Does Zionism sustain a dubious myth? Has not archaeology and other scientific finds confirmed much of Jewish history which is true and genuine? Is Bisk belittling?

The Polish demand for their territorial integrity is seen by Bisk so:

He further seeks to reinforce his comparison, writing

Similar to Zionist Messianism, some Polish Messianists were rationalists and others mystics. Edward Abramowski, one of the founders of the Polish Socialist Party was, like Tubenkin [Tabenkin, actually. YM], a state-rejecting Socialist…Polish Fascism, displaying contempt for the rights and lives of other peoples (best exemplified by modern Polish anti-Semitism); not unlike the most militant factions of the settler movement who actively cultivate a disregard for the dignity of other peoples.

And there we arrive at the object of the exercise. Not only is Zionism akin to Polish nationalism, but is slides into fascism and the Jewish residents of Judea and Samaria are not unlike Polish anti-Semites. Did Jews practice anti-Polish terror like Arabs have? Do all Jewish resettlers, or even a majority, oppress Arabs, disregard their dignity?

Bisk now takes a deep, dark breath and embarks on an irrational progressivism-

“But here the similarity ends…despite the above similarities between Polishism and Zionism, anti-Semitism has always been a sentiment characteristic of the vast majority of the Polish population…this atrocious sentiment…this kind of delegitimization [of the right of Jews to have a Jewish state – YM] is reserved for the alleged sins of the Jewish People and the Jewish State alone…anti-Zionism morph[s] into that strange and virulent postmodern iteration of anti-Semitism which has infected large portions of the so-called “progressive” left.

On its own, one could not argue with the above admirable remonstration. However, Bisk then concludes with an “irony”:

Incongruously, given the similarities described above between enlightened Polishism and Zionism, Israel (and the Jewish People at large) are now in a position to have a much more constructive relationship with historically anti-Semitic Poland than with the historically philosemitic left!

In other words, if I comprehend his thinking, Poland and Israel, in the coming near-future, will have a constructive (positive for good?) relationship despite Poland’s horrendous World War II record, and earlier anti-Jewish incidents over history. I am in doubt because while trying throughout the article to prove that Zionism can be as bad a Polishism, perhaps militaristic, oppressive and an example during the pre-war period for Jabotinsky’s Zionism,  he then uses the adjective “incongruously” in the sense of “despite”. Why incongruous?

But what of Jabotinsky?

In 1906, when the representative Straucher [Benno Straucher (1854 – 1940); from 1897 he was a Jewish National Party representative in Austrian’s Abgeordnetenhaus – YM]  arose in the Austrian parliament to first speak of the Jews as a nation, the Polish social-democrat Dashinski arose to heap scorn upon him. This becomes a double example: a member of an oppressed status belonging to an oppressed nation, a fervent nationalist himself, refuses to recognize the right of another people, oppressed even more, to achieve national existence of its own.

In other words, he was quite critical of advocates of Polish nationalism and linking him with oppression of Arabs would be wrong. In 1910, in Jabotinsky’s Poliaki i evrei, Hoffman writes that he railed against Dmowski and Polish nationalists for invoking exclusionary nationalism, condemning the leap from victim to aggressor on the part of Poles (and see here, p. 167): 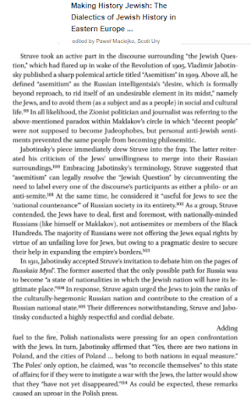 I am not sure if the main purpose of his piece was to attack Jabotinsky, Israel, Zionism or just parade his obtained knowledge. In any case, I hope I have provided counter-knowledge.
Advertisement