The Army has admitted that it won’t meet its recruiting goals for the year.

Army Vice Chief of Staff Gen. Joseph Martin told the House Armed Services Committee that the service will be 28,000 soldiers short of projections. The Army raised its maximum enlistment bonus to $50,000 and offers recruits up to $10,000 for showing up to basic training in 30 days. It routinely offers moral waivers for criminal records and no longer even asks for a high school diploma. And even in the midst of this massive recruiting crisis, it’s purging the unvaccinated. 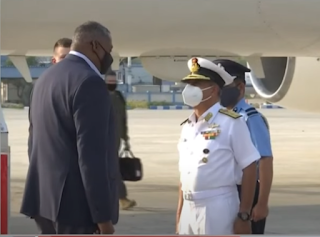 According to the Army’s latest numbers, 1,379 soldiers have faced separation and over 3,000 written reprimands were issued for refusing the vaccine. The numbers are much higher among the Army National Guard where there have been 10,798 refusals and 5,098 in the Army Reserve. The majority however haven’t even applied for an exemption. There are 40,000 unvaccinated Army National Guard personnel and 20,000 Army Reserve and Biden’s war on them is dangerously undermining our national security in the face of our enemies.

In early July, Biden’s cronies within the military barred unvaccinated personnel from taking part in training and drills, and denied them their pay. This treasonously impedes military readiness and unit cohesion. It’s also potentially catastrophic when applied to a fifth of Oklahoma Army Guardsmen, 17% of the Arkansas Guard, or even only 5% of the Minnesota National Guard.

“To date, the military has lost more than 1,100 soldiers, 800 airmen, 1,000 sailors, and 2,000 Marines because of this mandate, with thousands more separations likely to come,” Senator Roger Wicker, who sits on the Senate Armed Services Committee, warned. “We desperately need these service members, but President Biden seems content to lose them. His vaccine order is threatening our military readiness, and I have forcefully urged his officials to rescind it.”

Biden’s brass claim that vaccination is required to maintain military readiness, but they are the ones who have actually crippled military readiness. Earlier this year, hundreds of new recruits were being kicked out of the services over the vaccine mandate, some who had finished training, at a cost of millions of dollars. The Army alone appears to have wasted at least $11 million recruiting and training soldiers only to then prevent them from being able to serve.

All of this is going on while official Department of Defense data records only 95 military deaths due to COVID. Compare that to the 176 suicides in just the Army alone in one year alone.

The Air Force has had only 12 hospitalizations and 16 military deaths, but has separated nearly 300 airmen for refusing the vaccine. Lawsuits over religious exemptions are still ongoing.

From the Defense Department’s own numbers it’s abundantly clear that there is no major COVID crisis within the military. There have been four times as many civilian deaths within the department than active duty military deaths. There’s no justification for the mandate and for wrecking the military and forcing large numbers of military personnel out of the services.

Especially during a recruiting crisis.

The threat to military readiness does not come from 95 deaths, but from the plot to purge thousands of active duty personnel over a political decision made by an unfriendly administration.

“The Biden Administration is destroying the readiness of our Armed Forces by creating an unnecessary recruiting and retention shortfall, and trying to make up the difference by lowering other crucial education and fitness standards,” Rep. Mike Johnson noted.

Lowering these standards, involving high school diplomas and criminal records, is crucial to the larger demographic agenda of the Biden administration which seeks to aggressively “diversify” the military by bringing in more Democrats and driving out more Republicans.

The vaccine mandate is playing the role of a political test.

The Biden administration came into office vowing to fight “extremism” in the military. Secretary of Defense Lloyd Austin’s political witch hunt can’t be separated from his vaccine mandates.

While Biden imposed a general vaccine mandate on federal employees, civilian government employees, mostly Democrats, have been treated very differently. Little has been done to pressure federal employees. At the VA, only six employees were fired and, in complete contrast to matters within the military proper, the VA “pushed all of its unvaccinated staff to seek religious or medical exemptions and has not questioned the legitimacy of any of those requests.”

The “VA has mostly offered those workers other positions that interact with less vulnerable patients or did not require in-person attendance, allowing it to actually fire so few staff,” Govexec reported. The VA’s approach has been described as a test case for the federal workforce and the agency is a member of the Safer Federal Workforce Task Force.

While the Biden administration has defended its vaccine mandate for federal employees in court, it’s shown little eagerness to actually impose it on them. The federal vaccine mandate had been scheduled for May 31, before it was halted by a court ruling, but federal agencies hadn’t been taking any steps to prepare for implementing it because they have no desire to do so.

“During a moment of increased action from Russia to China, is it worth it? Is it worth sacrificing our end-strength for vaccine mandates?” Rep. Jim Banks had asked Gen. Milley. “Would you rather have a few extra battalions of unvaccinated soldiers or not have them at all because of this?”

“It’s tiny, the numbers that are actually being asked to process out, so I think it’s manageable,” the Chairman of the Joint Chiefs of Staff had sneered. “If 2,000 are kicked out, I think that wouldn’t hurt.”

It certainly wouldn’t hurt Gen. Milley who was ready to endorse critical race theory in the military. It fulfills the Biden administration’s true objective of purging conservatives from the only remaining part of the federal government whose personnel are largely conservative. But it treasonously undermines America’s military readiness in the face of the enemy.

Democrats are hollowing out another part of the federal government to make it an even bigger sinecure for their people while driving everyone who isn’t part of their political machine.