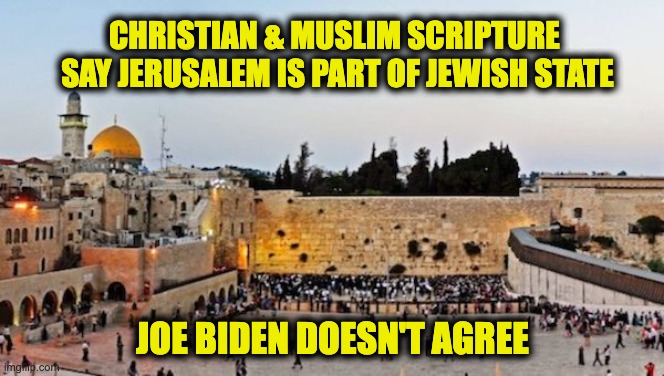 Joe Biden is looking to reverse the Trump administration’s recognition of Jerusalem as Israel’s capital city. He plans to divide the city, not geographically but diplomatically. He wants to open a Palestinian mission in Jerusalem, taking a giant step back from Trump’s recognition and reestablishing a roadblock to peace.

Recognizing Jerusalem as Israel’s capital and moving the U.S. embassy there was a big part of setting up the Abraham Accords. This action tool the religious component out of the peace equation and allowed the Arab States to make peace without conceding the Muslim’s third holiest city to Israel because it was a done deal. If he opens a Palestinian mission in Jerusalem, he is taking away the freedom of Muslim states to make peace. He also provides the Palestinians another reason to refuse peace.

But Biden’s obligation is not to encourage peace. It’s to make his far left, anti-Israel base happy.

Jerusalem is often described as a holy city to three faiths Islam, Christianity, and Judaism, a very accurate statement. But it leaves out the most important part, any Muslim, Christian, or Jew who denies that Jerusalem belongs to the Jewish people is denying the scripture of their own faith.

Let’s start out with the basics.  Jerusalem was NEVER part of a Palestinian State because there was never an independent state of Palestine. After the Bar Kochba revolt in 135 CE, the Romans punished the Judeans (Jews) for revolting a second time in sixty years. They changed the country’s name from Judea to Syria Palaestina (after the ancient enemy of the Jews, the Philistines. The Philistines were destroyed about a thousand years before Rome changed the name). At the same time, the Romans changed the name of the holy city and Judea’s capital from Jerusalem to Aelia Capitolina (literally Capitoline Hill of the House of Aelius). After the Romans threw out many Jews, the holy land was ruled by the Byzantine Empire, the Ottoman Empire, and finally, the British mandate before it became a Jewish State in 1948.

From 135 C.E. through 1948 C.E. (when Jordan began to occupy Jerusalem), there was a large population of Jews in Jerusalem. In fact, starting with the earliest information I could find (1844), there were more Jews in Jerusalem than people of any other faith.

To the ancient Muslim, Greek, and Roman pagan authors, Jerusalem was a Jewish city. Their text indicates the unanimous agreement that Jerusalem was Jewish because its inhabitants were Jews. It was founded by Jews, and the Temple located in Jerusalem was the center of the Jewish religion.

A supporting point for the Temple’s location we know from history, the highest part of ancient capital cities were generally where the holiest sites were built.  For example, in ancient Athens, the Parthenon, a temple to Athena, the goddess who the city is named after, is on the city’s high point. In Jerusalem, the Jewish Temple was built in Mount Moriah, the highest spot in Jerusalem.

To the ancient Muslim, Greek, and Roman pagan authors, Jerusalem was a Jewish city. Their text indicates the unanimous agreement that Jerusalem was Jewish because its inhabitants were Jews. It was founded by Jews, and the Temple located in Jerusalem was the center of the Jewish religion. don’t know about Jerusalem

Writings from the ancient Greeks and Romans identified Jerusalem as a Judean City:

From The Second Temple, Warning In Greek delineating a section of the Temple complex, which was off-limits to Gentiles.

An earlier capture of Jerusalem by the Greek-Egyptian King Ptolemy, son of Lagus, provided an opportunity for the obscure Agatharchides of Cnidus (second century BCE) to remark that the people of Jerusalem, who inhabited the most strongly fortified of cities, lost their city because they would not defend it on the Sabbath.

Josephus includes this selection in Against Apion as one of the early pagan critiques of the Jewish Sabbath, which Agatharchides deemed as “folly,” “dreams,” and “traditional fancies about the law.”

The Palestinians point to the fact that there is little archeological evidence that either Temple existed, which ignores the very convenient fact that there is no digging allowed on the Temple Mount because the Government of Israel tries to recognize its holiness to the Muslims. But when the Muslims dug up part of the Temple Mount to add to their Mosque, they dumped the tons of dirt with artifacts outside the holy city.

Archeologists have been sifting through the dirt for years (the project is s called the Temple Mount Sifting Project) and have found artifacts from the Holy Temples. For example, in 2005, an archaeologist found what is now known as the Gaalyahu Seal, which in Hebrew says belonging to Gaalyahu, son of Imer. The house of Imer was a well-known priestly family at the end of the First Temple period, roughly from around the 7th – 6th Centuries BCE.

The very verse in the Quran that supposedly makes the Temple Mount holy to Muslims also proves that the spot was occupied by the Jewish Temple:

This Koranic passage appears to show that the holiness of Jerusalem is a Jewish concept and should not be confused with an Islamic concept, as the 13th-century Arab biographer and geographer Yakut noted: “Mecca is holy to Muslims, and Jerusalem to the Jews.”

The Official 1925 Supreme Moslem Council (Wakf) Guide Book To Al-Ḥaram Al-Sarif (Temple Mount) recognized the presence of the Jewish Temples atop the Mount.  Shown below is paragraph two, which appears on page four, which says, “It’s [the Temple Mount] identity with the site of Solomon’s Temple is beyond dispute.” After Israel became a state in 1948, the Waqf removed from its guidebooks all references to King Solomon’s Temple, whose location at the site it had previously said was “beyond dispute.”

And let’s not forget that the Jewish Temple in Jerusalem is mentioned in the Christian Gospels, which pre-date Islam. For example, in Mark 12:40 and Luke 20:47, Jesus accused the Temple authorities of thieving and named poor widows their victims, Providing written evidence of this in Mark 12:42 and Luke 21:2. Dove sellers were selling doves that were sacrificed by the poor who could not afford grander sacrifices and specifically by women.

Note: the Luke mentioned above refers to the writer of the Gospel of Luke, NOT the guy from Star Wars.

According to Mark 11:16, Jesus then put an embargo on people carrying any merchandise through the Temple—a sanction that disrupted all commerce. In the Gospel of John 2:15-16, Jesus refers to the Jerusalem Temple as “my Father’s house,” thus, making a claim to being the Son of God.

What does this all mean?  Ancient Greek texts, Muslim texts, and Christian Gospels all agree with the Jewish scriptures that Jerusalem is a Jewish city, and there was a Jewish holy temple on top of Mount Moriah in Jerusalem.   No amount of lies from the Palestinians, the U.N., or any country––no one except the Lord God himself, can take Jerusalem away from the Jewish people.  But President Joe Biden will try. 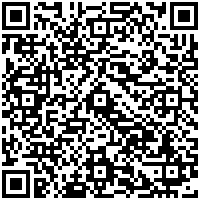