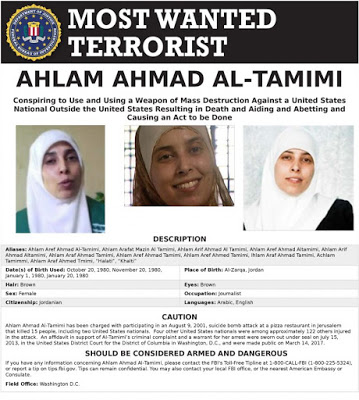 There’s a serious degree of interest and concern in Jordan over the letter that seven US Congressional lawmakers sent to Jordan’s ambassador to Washington three weeks ago.

As far as we know, the embassy hasn’t responded so far.

The text of that letter and some examples of the rising anxiety demonstrated by Jordan’s news industry are both in this long post we put up on Thursday: “14-May-20: In Jordan, they’re standing with confessed bomber Tamimi but worried“.

In tonight’s update, there’s an Arabic report (machine translated to English) from a Jordanian news site, Addustour, that was published this afternoon (Saturday):

Amman: The legal defense committee formed by the Jordanian lawyers for the liberated prisoner and Jordanian citizen, Ahlam Al-Tamimi, followed the news that circulated about Republican Party representatives in the American Congress who sent a message to the Embassy of the Hashemite Kingdom of Jordan in Washington, its content a threat to impose sanctions on the Hashemite Kingdom of Jordan to hand over Jordanian citizenship.

The freed prisoner, Ahlam Al-Tamimi… is considering a case brought by a group of Zionist Jews against Ahlam’s citizenship. In this regard, the defense establishment asserts the following:

The same defence lawyer is quoted in an outrageous (even by their standards) Aljazeera profile of Tamimi. You might want to read our analysis of it: “24-Mar-17: Our daughter’s grinning killer is shocked the US is pursuing her and for no obvious reason”

Dima Tahboub, is quoted in Albosala, another Jordanian news platform. She’s a Jordanian lawmaker who happens to block us on Twitter (we’re not offended) and who serves as spokesperson for the Islamic Action Front, the political wing of Jordan’s branch of the Muslim Brotherhood and closely aligned with the terrorists of Hamas.

She reacts in that article to what she terms American threats to Jordan By threats she evidently means the April 30 letter to Ambassador Dina Kawar from the GOP Congressmen. Plainly identifying with the unrepentant bomber and killer of children, Tahboub praises Tamimi for having moved from victim to initiator, from defence to attack, and to becoming a person who continues the struggle, advancing the role of Palestinian women martyrs.

Neither the clever lawyers nor the Islamist spokesperson bother to address what Tamimi happily confesses to doing at Sbarro. They have nothing to say about the people murdered there that day, our daughter Malki among them. Or about any of the simple, well-framed questions that Jordan’s ambassador in Washington has not yet mannaged to answer.

In Tahboub’s case, that’s not so surprising given that three years ago [link] she took the opportunity of an interview (in English – she has a doctorate from a British university) on Germany’s international Deutsche Welle platform to express her support for Ahmad Daqamseh, the Jordanian soldier who in 1997 opened fire across the border at a group of Israeli teenage girls from Bet Shemesh (or “human trach” as she referred to them in the media) on a school excursion, killing seven of them. We assume her support comes from the same dark place that brings her to stand up for Tamimi. Daqamseh, like Tamimi is free and living a charmed life in Jordan.

She told Tim Sebastian, formerly a BBC luminary, in that DW interview that many Jordanians “still see him [Daqamseh] as a hero. So if you are incriminating my viewpoint, you are also incriminating the viewpoint of the Jordanian people”. This is true. We see the same adoration at work with the Sbarro massacre fugitive, except that it’s the US that wants her in custody now.

Finally, also today: look at who’s not yet speaking up.

Tamimi, who is adept at, and depends on, social media, is currently operating yet another Instagram account. Her previous accounts there as well as on Twitter and Facebook have been shut down one after the other. This one – which we prefer not identify at this stage – is still going and we have asked for it to be taken down too.

Meanwhile she posted a video clip there this afternoon (that’s a screen shot at the top of this post with the identifying particulars blurred out) from the Turkish government’s official TRT media platform – a totally-supportive video message that starts with the question “will Jordan hand Tamimi over?”

She added the Arabic text on the right:

Evidently with all the media activity going on in her support, Tamimi is still waiting for the people who count, those in Jordan’s royal palace a short distance from her home, to step up. And as we point out here, she gives the impression of someone who’s running out of patience.

Email ThisBlogThis!Share to TwitterShare to FacebookShare to Pinterest
Advertisement