Our partners-in-peace, the Palestinian Authority and its president-for-life Mahmoud Abbas, are taking pains once again to lay out how peace is going to come about, and how not.

A brief extract of his views:

“Any American declaration of recognition of Jerusalem as the capital of Israel – if there is one – would mean total destruction of the peace process,” said Al-Habbash, who was quoted in Israeli media. “The whole world will pay a price for any change or harm to the political reality of Jerusalem,” he warned. The Yediot Aharonot newspaper noted that Al-Habbash made the comments with Abbas standing at his side, meaning that Abbas fully backed the remarks. “The Arab states stand by us, especially Saudi Arabia and Egypt, and the entire Arab-Islamic nation is united in one position,” Al-Habbash further claimed.

This Al-Habbash is no stranger to our blog even if his name is not so well recognized. He’s the central player in “15-Jan-14: How jihadist messages heard in the Palestinian Arab villages go unreported in the wider world“, and “2-Jun-14: Palestinian government ministers and the political necessity of speaking out of both sides of the mouth depending on who’s listening“. Starting in 2014, he has been serving as a Supreme Shari’ah Court Judge, as Chairman of the PA’s Supreme Council for Shari’ah Justice and as Mahmoud Abbas’ Advisor on Religious and Islamic Affairs. Until 1994, he was an up-and-comer in Hamas.

In the earlier of the two pieces, we described him as a man “with a powerful megaphone” who

is today a certified PA/Abbas insider, a cabinet minister who is more influential in the villages of the PA regime’s fiefdom than most of its other politicians. This is because of what he does for a living: after earlier stints as minister of agriculture and minister of social affairs, he has served as minister of “waqf and religious affairs” since 2009… In a society where religion plays such a deadly important role, the influence of Al-Habbash is tremendous, even if most analysts and reporters are oblivious to it.

Al-Habbash is hectoring his assembled audience of Palestinian Arab VIPs, including the “moderate” Mahmoud Abbas who heads the PA, on how the young men who are pointlessly and violently laying down their murderous lives in the name of jihad in Syria ought to think again and go do it in Jerusalem.

It’s a shame this Koran-thumping, rabble-rousing man of extreme violence and major influence who explicitly wants to see more and more young Palestinian Arabs die in the service of the Abbas presidency isn’t better known. Perhaps he will be now.

His Saturday statement on how a shift of the United States embassy to Israel’s capital city will “destroy peace” has a lot packed into it. It doesn’t convey anything especially new; you can see what he said of an almost identical nature nearly a year ago [“Abbas aide: Moving American embassy a ‘declaration of war’“, Israel National News, January 9, 2017]. But for sheer hypocritical double-talk, it ought to get more attention.

It’s a shame that mainstream analysts don’t try to take it apart. When Al-Habbash says violence (and from past experience, he means extreme, lethal violence) will flow from a diplomatic move on the part of the Trump administration, here’s what it would be different from:

The fact that Jerusalem has never been the capital city of any Arabic entity is pushed off the page both by demagogues like Al-Habbash and by the reporters who quote them.
If you’re a regular reader, you probably know enough to extend this list further and further down the page.
Advertisement 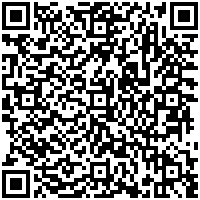