“They journeyed from Beit El… to Ephrath, when Rachel went into labor and had difficulty in her childbirth. And it came to pass…she died…and was buried on the road to Ephrath, which is (another name for) Bethlehem. Jacob set up a monument over her grave; it is the monument of Rachel’s grave until today (Genesis 34: 16-20)”

The Tomb of Rachel is an important holy site for Jews.  This site is popular with Orthodox Jewish tourists who come to pray, but is seldom on the itineraries of Christian groups or non-religious Jewish groups coming to the Holy land.  In my opinion, this site should be on almost everyone’s itineraries.  Regardless of one’s background, the prayers said here have extra meaning for everyone!


Rachel was Jacob’s favorite wife.  In fact, the Bible singles her out by saying how he loved her (Genesis 29:20).  Wanting to marry her, he asked her father Laban (a notorious swindler) for Rachel’s hand in marriage.  Laban told Jacob that he would have to work for him for seven years, and only then would he grant permission for the marriage.  After the seven years, they began planning the wedding, but Jacob had an inkling that Laban would alter the deal in some way.  He knew that his future father-in-law wanted him to marry Leah.  Due to his suspicions, he gave Rachel 3 secret passwords to confirm that when they were under the chuppah it was indeed her (a chuppah is a canopy, Jewish marriages are still performed this way).   His fears were confirmed because during the wedding, Laban made the hall dark and brought out Leah in a veil which covered her face (even today Jewish women get married with a veil, so this alone wouldn’t have aroused suspicion).  Rachel really wanted to marry Jacob but faced with her older sister about to be utterly humiliated in front of the whole town, she selflessly gave her sister the passwords.  At night, she hid under the bed, speaking with Jacob so that he would hear her voice and think it was her.  This was Rachel’s greatness, sacrificing her greatest desire so as not to humiliate someone, at extreme personal cost.  We will soon see how this act makes the prayers at this holy site extra special!

When morning came, Jacob saw how he had been deceived and confronted Laban.  Laban said brazenly “Such is not done in our place, to give the younger before the elder (Genesis 29:26).”  But he would gladly grant him Rachel’s hand in marriage, in one more week, in exchange for another seven years of service (although the Torah forbids a man to marry sisters, this happened before the Torah was given to the Children of Israel at Mt Sinai and therefore this law was not yet binding).  After fulfilling his commitments to Laban, Jacob took his 11 kids and wives (Rachel was then pregnant) and returned to Israel.  After staying some time in Shechem (today’s Nablus) they went southwards (along today’s highway 60).  After they passed Jerusalem and were almost in Bethlehem, Rachel went into labor. Although her son Benjamin was born healthy, she died giving birth and he buried her along the side of the road.

It might seem odd that Jacob would bury the person he most loved where she happened to die.  Why couldn’t she have a proper burial spot like Jacob and Leah would later have in Hebron (click here to see Jacob and Leah’s burial spot).  When Jacob was on his death bed (Genesis 48), he brought up the topic to Joseph (Rachel was his mother). According to Jewish sources, he explained that her burial was not random at all, but divinely ordained from above!  He prophesized that in the future, his descendants would be exiled by Nebuchadnezzar, King of Babylonia and on route, they would pray here that they would survive exile and eventually return.  Rachel’s soul then pleaded with G-d with heavy tears and Hashem accepted them, saying “Restrain your voice from weeping and your eyes from tears: for there is reward in your accomplishment….and they will return (one day) from the enemies land. There is hope for your future…and your children will return to their border (Jeremiah 31: 15-16)”.  Because of this, G-d promised that the Jewish people would return to their land (which it what we see happening right now)!

Another question arises: why did the prayers have to be at her tomb as opposed to another righteous person’s grave?  According to Jewish sources, G-d was upset with Idol worship and told Jeremiah (the prophet) to pray for His children’s mercy.  He went to the grave of Abraham who interjected, but G-d rejected his prayers. The same results happened with Isaac, Jacob and even Moses, who the Bible calls the greatest prophet of all time.  But when Jeremiah went to Rachel’s Grave, Rachel said “Master of the Universe, It is well known to you that your servant Jacob loved me and worked 7 years on my behalf…When my father decided to give him my sister instead of me… I found myself in a very difficult situation…I had pity on my sister…and revealed the secret (passwords) so she wouldn’t be put to public shame….I am only human, nonetheless I brought a rival into my house but You are the Eternal Living G-d, why should you be jealous of meaningless idols (i.e. rivals).” Because of what Rachel had done, she was the only one in a position to make that request from G-d, and that is why she needed to be buried at that location by the side of the road.

Because Jewish worshipers here (even women and children) were being attacked in the 1980s, 90s and early 2000s by Palestinian terrorists, in 2005 a large concrete wall was built to surround it to protect worships from snipers (today it is very safe to visit and welcomes thousands of people every day).   This serves to not only make the site secure, but also gives tourists a fuller understanding of many of the unique challenges Israel has had to contend with.

Today the site flourishes, with a full time Kollel (Talmudic Academy for Torah studies), a synagogue and even a hospitality corner with hot drinks and snacks!

Upon reading this, it is my hope that your prayers will emanate from this holy site on your next trip to Israel!

To see a sample (day trip) tour itinerary of the area, click here. 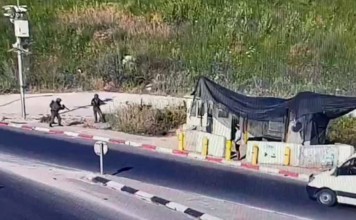