Originally published at Rubin Reports. Has it become time that the absurd paradigm governing the Israel-Palestinian and Arab-Israeli conflict as well as the “peace process” be abandoned or challenged? After all, this narrative has become increasingly ridiculous. Here is what is close to being the official version:

The Palestinians desperately want an independent state and are ready to compromise to obtain that goal. They will then live peacefully alongside Israel in a two-state solution. Unfortunately, this is blocked either by: a) misunderstanding on both sides or b) in the recent words of the Huntington Post, “the hard-line opponents who dominate Israel’s ruling coalition.” Israel is behaving foolishly, too, not seeing that, as former President Bill Clinton recently said, Israel needs peace in order to survive. One aspect—perhaps a leading one—why Israel desperately needs peace is because of Arab demographic growth. The main barrier to peace are the Jewish settlements. This interpretation has nothing, absolutely nothing, to do with reality. People on both sides know this, even if they rarely say so publicly. For the Palestinian side, the pretense of peacemaking—which every Palestinian leader knows—obtains money, diplomatic support, popular sympathy, and pressure on Israel. Here’s the dirty trick involved. If anyone raises in Israels raises issues about whether a “peace process” can really bring peace, concerns about how it would be implemented, and documented experience about Palestinian behavior in the past, the response is that Israel doesn’t want peace. The actual arguments and evidence about these problems is censored out of the Western mass media and distorted in terms of political stances.

Is the peace process after 40 years (if you count from its origins) or 20 years (if  you count from the time of the “Oslo” agreement) at a dead end? Of course it is. That should be obvious. In reality, the vast majority of Palestinian leaders favor establishing no Palestinian state unless it can continue the work of trying to wipe Israel off the map. They are in no hurry. They do not want to negotiate seriously. And, of course, in the case of Hamas, which controls or has the support of about one-half of the Palestinians, this violent and genocidal intention is completely in the open. You can’t negotiate seriously with those who are not–to recall the old PLO slogan–the sole legitimate representative of the Palestinian people.  I say this with deep regret but it is the truth.

On the Israeli side, the pretense is kept up because there is already enough Western hatred or real and potential hostility to what is required for its own self-defense. Israel offered deep concessions and took great risks continually through the 1990s. The judgment on the year 2000, the reveling year on the “peace process,” was that this Palestinian rejection of a two-state solution proved that they didn’t want one.

Now, every few days Abbas comes up with a new trick. The latest one is that he really desperately wants to meet with Netanyahu BUT the Israeli prime minister must first meet his latest preconditions which keep changing. And every time Israel starts closing in on matching one of his demands he just changes them.

Meanwhile, it is common knowledge that there is a freeze on government permits for construction on settlements but Abbas doesn’t care.Kerry gives Israel no credit for that on the peace issue, though it does help U.S.-Israel relations in other ways. For example, Israel will be the first country allowed to deploy the new F-35 warplane and is getting advanced munitions that could be used to hit Iranian nuclear installations. The only condition on these weapons is, of course, that t hey not be used to hit Iranian nuclear installations.  Still, they might be handy some day. And that is precisely the reason Israelis play along and pretend that he might have a better chance at making peace than he does. Which is about zero,

Speaking of Iran, it contributes to a regional situation that ensures anyone on the Israeli, Palestinian, or other Arab side would have to be crazy to make compromises or concessions for peace right now.

At a time when Iran is proclaimed suddenly moderate and when the genocidally-intended Muslim Brotherhood is now a U.S. ally and when even the Taliban is being declared acceptable, why is it that Israel is being portrayed by many of the same people as intransigent and the source of problems? 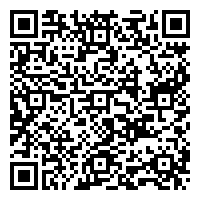