In 2017, Matthew Furlong applied to join the Cheshire police force. He was told “it was refreshing to meet someone as well prepared as yourself” and that he “could not have done any better.”

But despite his qualifications, he lost out to other candidates. His father, a detective inspector on the force, lodged a complaint, and an employment tribunal found that the Cheshire police had discriminated against the 25-year-old.


You see, Furlong is white, is male, and chooses to marry a woman. He does not belong to any special identity group, which is almost a crime nowadays. If only Mathew would have dissembled a bit on his application form. But Mathew said he couldn’t do it.

Here’s another interesting story of self-identification that intrigued the British public recently. A prisoner in a British jail declared that he now identifies as a woman. Quicker than you could say “total morons,” the authorities transferred him to a woman’s prison – where he promptly raped two of his fellow prisoners. The reason he was in prison in the first place was, by the way… rape!

This bloke didn’t have to undergo any tiresome assessment or analysis. No psychologists were required to consider his case or claims. He underwent no hormone treatment or surgery.

All that was needed was a self-declaration and a woman’s wig. He was all set! In fact, he could have self-identified as a woman on Monday and re-self-identified as a man on Tuesday. My advice to him is to hold on to the wig. You simply never know these days whom you might feel like being when you wake up in the morning.

Remember Rachel Anne Dolezal, the former NAACP chapter president, who claimed to be a black woman even though none of her ancestors were African? Her defenders asserted that she had a right to self-identify as black even though she… well… isn’t.

So here’s my suggestion to all those looking to advance their careers in law enforcement, politics, or anywhere else: In the face of widespread discrimination against those whose values and colors don’t fit anymore, simply adopt “instantly reversible self-reassignment.”

I mean, why not? You will protect yourself from racism, discrimination, and bullying and will increase your chances of getting ahead. What do you have to lose?

Unless, of course, you have the integrity and courage to stand up to the politically-correct fascists. For indeed, this is a fight worth fighting – and winning. 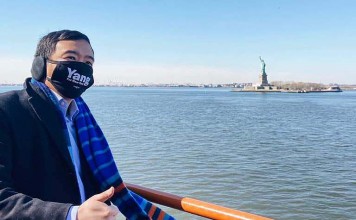