The folks at Christian Century have always paid close attention to what Those Sovereign Jews (TSJs for short) have been doing in the Holy Land. It’s a little hyperbolic to assert that if a Jew blows his nose in Jerusalem, Christian Century will cover it. But it is fair to say that when Palestinian suicide bombers blew themselves up during the Second Intifada, the magazine would either ignore it or downplay it by providing exculpatory “context” as to why they did so. And invariably, this context would circle back to the evils perpetrated by TSJs in the Holy Land (TSJITHLs for short).

The Palestinian Authority has used television to teach kids to hate, praised people who have stabbed Jews in the Old City, and paid salaries to the families of terrorists who have murdered Jewish men, women, and children, with little complaint or coverage from Christian Century.

It might mention these things in an article about Israeli efforts to defend its citizens, but publishing a story that leads with and is focused on bad things Palestinians — and not the Israelis — do in the Holy Land? That’s simply out of the question.

That’s not how the magazine rolls. Its coverage of events in the Holy Land is devoted to scrutinizing how Jews use their agency. TSJs simply can’t catch a break in the pages of Christian Century, while the Poor Poor Palestinians (PPPs) get a pass.

For example, when TSJs built a security barrier to stop terror attacks from the West Bank in the early 2000s, the magazine published articles that emphasized the barrier’s human impact on the Palestinians (and even Israelis), but wasn’t so aggressive in its reporting of the impact Palestinian suicide attacks had on life in Israel. In 2003, the magazine published an article by former editor James M. Wall (who later became an editor at a white nationalist publication, Veterans News Now,) declaring that the security barrier was nothing more than a “land grab.”

In 2015, the magazine published a more sympathetic view of Israeli security measures, lamenting that the barriers between Israel, the Gaza Strip, and the West Bank stopped Israelis and Palestinians from getting to know one another. The article declared that the barriers deprived Israelis of a “personal frame of reference” when dealing with the Palestinians. Still, it was the barriers, and not the violence that preceded their construction, that was the real problem.

The report acknowledged that terror attacks declined substantially after the construction of the barrier in the West Bank, but then suggested that this reduction was not because of the barrier itself, but because Palestinian leaders came to the realization that terrorism was a Real Bad Thing (RBT) and called a halt to the attacks. The implication was that the Palestinian elites had come to their senses by stopping the attacks and the Israelis had done something unreasonable when they built the barrier.

Christian Century’s obsession with TSJIHLs manifested in the magazine’s September 2, 2020 issue, which includes an article by Mordechai Beck, an Israeli who serves as a semi-regular contributor to the magazine about Israeli issues.

The piece is about the controversy surrounding a proposal to install a cable car that would bring tourists from a parking lot near the First Station in Jerusalem, over the Hinnom Valley and Silwan and up to the Dung Gate area in the Old City of Jerusalem. There is a lot of opposition to the proposal, which would alter the skyline of Jerusalem. A lot of architects have condemned the proposal, which is currently before the Israeli Supreme Court. Opponents of the project acknowledge that getting into and out of the Old City is difficult, but argue that building a cable car is not the way to do it because of its impact on the atmosphere, environment, and archaeology of the Holy City of Jerusalem.

On this score, Christian Century’s editors can say, “Look, we published a story that shows the holy city of Jerusalem as a place where real people live on a day to day basis. We highlighted some of the difficulties both its inhabitants and officials struggle with as they live in this city. What’s your problem?”

The problem is that this is Christian Century we’re talking about — a magazine that has a long history of demonizing the Jewish state and giving its enemies a pass. Its longest serving editor, Charles Clayton Morrison, was a well-known antisemite, a fact lamented by the magazine’s second longest serving editor, the previously mentioned James M. Wall, who ironically took up with the antisemitic white supremacists after his retirement from Christian Century, with little comment or criticism from the magazine itself.

These days, the magazine is not the hotbed of anti-Jewish hostility it was in its past, but it is still Johnny-On-The-Spot in scrutinizing Jews as they work to govern their state while remaining relatively silent about problems in Palestinian society that obstruct peace.

This tendency to scrutinize Israel while giving the Palestinians a pass was evident in the magazine’s January 2020 issue when it published an article by Cary Nelson, a pro-Israel academic who has been a staunch opponent of the BDS movement and anti-Zionism in higher education.

To his credit, Nelson does say: “Curtailing violence and incitement to violence is the single highest priority for the PA if it wants to see good faith efforts by Israel.” He even admits that he has “little faith in the ability of the ruling Hamas party to reform itself or even its interest in doing so, other than eliminating rocket attacks and violence on the border,” and that when dealing with Hamas, ”reciprocity is not a realistic expectation.” For the Christian Century, this was a great leap forward.

Nevertheless, Nelson’s article, titled “What steps toward peace could Israelis and Palestinians take now?” states explicitly that “There are clearly more imperatives here for Israelis to act than Palestinians, in part because Israelis are the greater power and have overall control of the West Bank.” Nelson’s article might go over well with the dwindling number of mainline pastors who read Christian Century, but it downplays the Palestinian Authority’s ongoing failures that obstruct the prospects for peace.

Given the centrality of Jerusalem to the Christian faith, it’s perfectly reasonable for Christian Century to publish an article about a land-use project in the city, but how about a few articles about the lack of elections in Palestinian society?

How about an in-depth article about the problem of incitement in Palestinian society?

How about an article about the corrupt government of Mahmoud Abbas (and not just another screed about mean ol’ Benjamin Netanyahu?)

How about offering up a churchly, Christian response to the Palestinian Authority’s policy of paying the families of terrorists who have killed Israeli women and children in recent years?

How about an article about the hateful things the organizers of the “March of Return” said about Israel and Jews during those protests in Gaza?

How about an in-depth article on the evils of “anti-normalization” activism in Palestinian society (which is geared toward depriving Palestinians of a “personal frame of reference” when dealing with Israelis)?

And while we’re at it, an article about the antisemitic bigotry exhibited by Christian Century’s former editors would go a long way toward clearing the decks, assuring people that the current staff of the publication “gets it” when dealing with issues related to the Holy Land.

Wouldn’t it be nice. 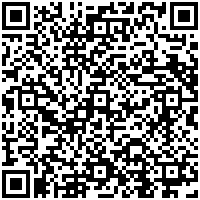