We suggest that those in America who are sharply critical of Israel’s Prime Minister Benjamin Netanyahu for facilitating a union between two hard right political parties ahead of the upcoming elections should take a deep breath. As has been widely reported, longtime Israel supporters like AIPAC, the American Jewish Committee and the ADL have strongly condemned Netanyahu for helping to create an alliance between Bayit Yehudi and Otzma Yehudit, the latter of which is the ideological descendant of Rabbi Meir Kahane’s banned Kach Party.

The American critics maintain that most of us here in America believe as they do – that any hint of their legitimization is unacceptable and will profoundly undermine American Jewish support for the Jewish State.


Savvy observers will have no doubt that Netanyahu’s nod to the right was motivated by political calculation involving the threats posed by his chief rivals: Benny Gantz, Yair Lapid and Moshe Ya’alon. That is, Netanyahu has determined that he needs support from the right to stay in office and also to fend off political gains by the left in the longer run. The move had nothing to do with the prime minister experiencing a rightward epiphany.

To be sure, we recognize that some members of the newly allied parties have been highly controversial (several have faced criminal prosecution for incitement to anti-Arab violence – based, we believe, upon an extravagant view of the facts by the prosecuting authority). Some have been in the forefront of efforts to keep Jews and Arabs apart in all ways possible. (Many have argued that all of Israel is the home of the Jews and that Arabs living within its confines are either by-invitation-only guests or squatters.) But we also note that Netanyahu has not signaled that he is turning over the keys to his government to them.

And in this vein, it is important to note that, as Netanyahu himself has asserted, the criticism leveled at this alliance represents “hypocrisy and double standards by the left.”

“They’re condemning [the formation of] a right-wing majority with right-wing parties while the left acted to bring extreme Islamists into the Knesset to create a majority bloc,” he said. He then went on to list several instances of supposed support by left-wing politicians. Indeed, from our own perspective, we do not recall the current critics of Netanyahu having publicly attacked those efforts.

Indeed, the notorious MK Hanin Zoabi, who was Turkey’s guest on the Mavi Marmara, one of six ships in the infamous flotilla that attempted to break Israel’s three-year blockade of the Gaza Strip, continues as a member of the Knesset and Palestinian advocate without a peep from the current anti-Netanyahu critics.

To bring it closer to home, we would suggest that there may be an overarching anti-Netanyahu sentiment in play. ADL head Jonathan Greenblatt was one of President Obama’s senior advisers on Jewish affairs. Here is what he said about Netanyahu’s merger plan: “There should be no room for racism and no accommodation for intolerance in Israel or any democracy. ADL previously has spoken out on hate-field rhetoric of leaders of the Otzma Yehudit Party. It is troubling that they’re being legitimized by this union.”

Need we remind anyone that Greenblatt’s boss notoriously spent taxpayers dollars in an effort to get Netanyahu voted out of office? In this, the “collusion era,” this sounds rather remarkable. But it is true. It might also suggest that Netanyahu’s critics on the merger issue should just cool it. Politics is politics. But when was the last time anyone heard from Palestinian President Mahmoud Abbas? He has been effectively shunted to the background of Middle Eastern affairs and Israel, led by Netanyahu, who is doing just fine in the international arena. 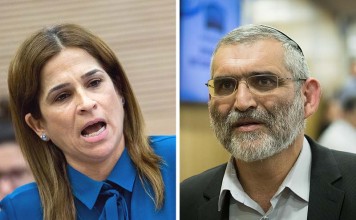