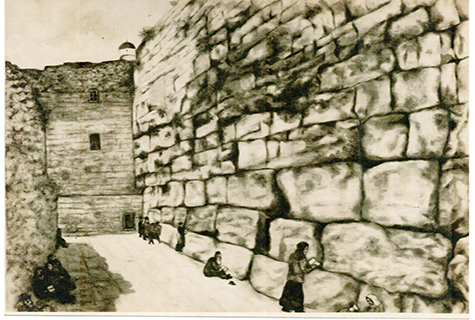 The Kotel Hamaaravi, or Western Wall, has been fundamental to Jewish consciousness since the destruction of the Second Temple in 70 A.D. It is not surprising, therefore, that it became a popular theme for artists, particularly in the 19th century, when many in the West, including notables such as U.S. Grant, Theodore Roosevelt, Herman Melville, and Mark Twain, traveled to see the Holy Land. (See my June 18, 2015 Jewish Press article “Mark Twain, Eretz Yisrael, and the Jews.”)

The following four artistic depictions of this most sacred Jewish site from my collection are among my personal favorites.


Exhibited above is an original print of Marc Chagall’s “The Wailing Wall,” which he has signed on the verso (not shown) “Marc Chagall Paris 1931-33 Le Mur des Pleurs.” The original painting hangs in the Tel Aviv Museum of Art.

Ambroise Vollard (1866-1939), one of the most important dealers in French contemporary art of his time, commissioned Chagall to illustrate the Old Testament. Taking on this assignment at this point in his career constituted an exceptional risk for Chagall because, having finally become renowned in the art world as a leading contemporary painter, he would now be withdrawing from the contemporary themes for which he was celebrated to make art that reflected an ancient past.

Although Chagall could have completed the project in France, he used the assignment as an excuse to travel to Eretz Yisrael, arriving there in February 1931. Feeling very much at home in a land of Yiddish and Russian speakers, he was impressed by the pioneering spirit of the kibbutzniks and was deeply moved by the Western Wall and the other holy places. As he later told a friend, Eretz Yisrael gave him the most vivid impressions he had ever experienced.

Where other artists had found inspiration in the unusual landscapes and people of the North African region, Chagall, as a Jew, had an entirely different perspective: he was not searching for mere external stimuli but rather for an inner spirituality from the land of his ancestors. Immersing himself in his work, he became engrossed with the broad spectrum of Jewish history, the Jewish people, and the Jewish land.

Between 1931 and 1934, Chagall worked obsessively on his Bible series, even going to Amsterdam to carefully study biblical paintings by Rembrandt and El Greco. He especially loved the atmosphere of Jerusalem’s Jewish quarter, frequently walking its streets. He told Franz Meyer, a Jewish German-Mexican financier, photographer, collector, and Chagall biographer: “I did not see the Bible, I dreamed it. Ever since early childhood, I have been captivated by the Bible. It has always seemed to me and still seems today the greatest source of poetry of all time.”

Indeed, Chagall described his experience at the Kotel in grand poetic terms:

I came to Palestine to examine certain ideas, and I came without a camera, without even a brush. No documentation, no tourist impressions, and nevertheless I am glad to have been there. From far and wide, they pour towards the Wailing Wall, bearded Jews in yellow, blue and red robes and with fur caps. Nowhere else do you see such despair and so much joy; nowhere else are you so shaken and yet so happy as at the sight of this thousand-year-old heap of stones and dust in Jerusalem . . .

Chagall’s depiction of the Kotel is far from among his most recognized works – in fact, relatively few people have seen it or are even aware of it – but it remains among my personal favorites. Born in Nogaisk, Russia, Saul Raskin (1878–1966) studied lithography in Odessa and later attended art academies in Germany, France, Italy, and Switzerland before coming to the United States in 1904). Working in many media, he became a multifaceted artist who produced etchings, paintings, watercolors, and even cartoons. Known for his draftsman-like attention to detail and his realistic approach, he painted primarily scenes of Jewish life and lore, especially Jewish life on the Lower East Side of New York.

Raskin famously illustrated many Hebrew texts, including Pirkei Avot, the Haggadah, Psalms, the Siddur, and Kabbalah and other Jewish works such as “Hebrew Rhapsody” and the etching displayed here, “Ha-Kotel Ha-Maaravi,” which he has originally signed in Hebrew.

Raskin promoted his belief that the working classes do not understand, and cannot relate to, an idealist art created and controlled by the wealthy because such art “failed to reflect the soul of the people which gives life to art.” The sign of a good work, he argued, was its ability to reflect that which was eternally human, including particularly the qualities of love, justice, and freedom, and he maintained that artistic inspiration must come from actual experience. He specifically applied these beliefs to Jewish art and artists, and I would argue that his rendition of the Kotel shown here rises to that high standard.

After the war and between 1921 and 1960 Raskin visited Eretz Yisrael six times, and his trips there yielded a series of paintings of Jewish life, among them twenty well-known lithographs of Jerusalem. At the time of his final visit at age 82, he found Israel to be “a new and exciting place” and published Personal Surrealism, paintings depicting his dreams. Ephraim Moses Lilien (1874-1925), the first artist to become involved in the Zionist movement, was an active participant in three consecutive Zionist Congresses. As a member of the Democratic Faction, he stressed the need to foster Jewish culture, including the Jewish arts.

He collaborated closely with Herzl, and his photograph of the Zionist leader on the Rhine Bridge has come to be the definitive pictorial representation of the Father of Modern Zionism. His Herzl portraits and his decorations for the Golden Book of the Jewish National Fund also became familiar to Jews all over the world. Along with Boris Schatz and others he was a member of the committee formed to establish the Bezalel School of Art in Jerusalem (1905), where he taught the following year.

Many of Lilien’s etchings are views of Austria, Hungary, Damascus, and Beirut, but his better-known works record his impressions of Eretz Yisrael. His drawings, executed mainly in India ink, show a crisp, elegant line and a strong contrast between black and white areas, and many of his etchings have entered the collective Jewish consciousness, even when Lilien is not recognized as the artist.

For example, before I ever heard Lilien’s name decades later, I grew up picturing Abraham as depicted by Lilien’s beloved and iconic work, which I first saw in my first grade “reader:” an old man with a long flowing white beard, clad in a desert robe and leaning his wrinkled hands on his staff, gazing lovingly skyward with a sweet and innocent face at a blazing, starlit sky somewhat evocative of Van Gogh’s “The Starry Night.” Another unforgettable etching, one of the most enduring and endearing works of Jewish art, shown here, portrays an elderly Sephardic Jew looking up in awe at the Western Wall.

Many of his works, including the two mentioned above, have been the subjects of Israel- and JNF-issued stamps.