After spending a year and a half in New York, Devorah went back to Mihowa in the summer of 1933. At first she’d told the children that the Romanian authorities hadn’t let Nachman come because he was a landowner, but later she let it slip that in truth he was simply reluctant to leave the farm for too long.


For much the same reason, he was unwilling to immigrate with Devorah to America – although she begged him to consider it.

Nachman was indeed a multifaceted man whose frugality was counterbalanced by his generosity, as he would house any Jewish visitor passing through Mihowa who needed a place to stay for Shabbos. He was also very attached to his children. Not wanting to “lose” any more of them to America, throughout the late 1920s and 1930s he used the money his New York children sent for tickets to America to instead buy land and horses in the hope that at least some of the children in Mihowa would remain in Europe.

With a heavy heart and bitter tears, Devorah parted from her children in New York, fearing she would never see them again. Not wanting his big sister to travel alone, Joe accompanied her on the ship to Hamburg. Putting Devorah on a train to the Bukovina, he remained in Germany until the end of August to arrange for his in-laws, Schlome and Rachel Weiner, then in Germany, to immigrate to America.

Realizing that Hitler’s rise to power made it imperative to get his relatives in Germany out as soon as possible, during the next year Joe also sponsored the immigration of his brothers-in-law. From that point on, Joe and his nephew Abie Eisenberg, Devorah’s son, were constantly filling out affidavits for other family members who wanted to leave Europe.

In 1938 Joe Scharf’s son Abe fulfilled his above-mentioned ambition, becoming an immigration lawyer. He would prove to be a tremendous help to the family in these matters. For his graduation, Joe organized a banquet at the Paramount Mansion, inviting the entire family to celebrate. The picture taken at the banquet hung on Freida Sima’s wall for the rest of her life along with the large family portrait taken at her mother’s farewell party.

That banquet was the family’s last celebration before the war that would devastate the Scharfs and Enzenbergs in Europe, killing young and old alike.

But that is another story, a tragic one, that deserves to be told separately.

(This installment of the Frieda Sima series is dedicated to the memory of Marium Enzenberg Rosenberg, Freida Sima’s sister, whose yahrzeit is 9 Nissan, which coincides this year with April 17). 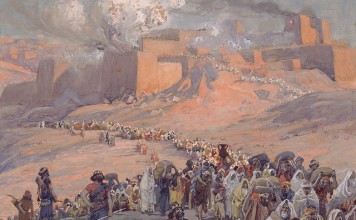