Editor’s Note: This is the second of a multipart series on the life and times of a young woman who came to America on her own in the early 1900s and made her way in a new country. The first part (“The Education of Freida Sima”) appeared as the front-page essay in the Oct. 9 issue; part three will appear in December.

My grandmother Freida Sima Ensenberg came to the United States at age fifteen, one of the two million Jews who left Eastern Europe for America during the “Great Wave of Immigration” (1881-1914).

Like many immigrants, she traveled alone and was met by family already in America who helped pay for her ticket. And like most of those immigrants, my grandmother wanted a better life than that offered in her Bukovinian hometown, the Mihowa, or in the Eastern Galicia shtetl of Martnowy where her family was temporarily living. But unlike most, her dream was not about making money or escaping pogroms or seeking adventure but rather about continuing her studies and earning a degree.

The daughter of a Vizhnitzer chassidic family, the eldest of ten children born to Nachman and Devorah Ensenberg, she had successfully fought her father in Europe for the right to attend cheder and then convinced him to let her immigrate to America by promising to send money back to her family. Her secret desire, one she had shared only with her sister, was to become a teacher.

When the S.S. Rijndam docked in New York in the early morning hours of Friday February 3, 1911, Freida Sima was one of 1,800 third-class passengers who peered out through the fog and rain at their new home, hoping the rest of their lives would be better than the events of the past two weeks.

Since she’d embarked at Rotterdam, choppy seas had kept her below deck, sick to her stomach. Boarding the ferry that took steerage passengers to Ellis Island for processing, she took her first breath of fresh air, concerned about whether she would finish the immigration procedure before Shabbos.

Like millions of immigrants before her, she entered the Great Hall at Ellis Island and was immediately overwhelmed by its size. Between 2,000 and 4,000 passengers were processed there daily, usually in under five hours – if they were healthy. Joining the lines of immigrants being examined in groups of thirty, she inched forward, recalling her Aunt Sheine’s instructions for answering immigration questions about who paid for her ticket and where she would be staying.

The girl ahead of her in line, Marium Strauss from Lomza, was around her age. Seeing Freida Sima’s fearful look she nudged her in the ribs. “Remember, you are sixteen!” she said, reminding her of the cutoff for unaccompanied passengers wishing to work in America.

By the time Freida Sima reached the head of the line she was in a fog. Asked her name by the immigration officer, she automatically gave her childhood nickname of “Baba” or “Babaleh” (little grandmother, given after a serious illness) and was listed on her immigration papers for all posterity as Babe Ensenberg, age 16, 5 feet 1 inch, with brown hair, grey eyes, in good physical and mental health, no identifying scars, neither polygamist nor anarchist, reading and writing German, no profession, possessing $20 and going to live with her Aunt Sheine Scharf on E. 5th Street in New York City.

By mid-afternoon my grandmother had returned by ferry to Hudson Pier where she met her dashing twenty-year-old uncle Yossle, her mother’s brother who had come to America in 1906. Rushing to get home before Shabbos – home being Yossle’s married sister Marium’s apartment where he and a third sister, Sheine, all lived with Marium’s family – she got her first glimpses of New York. 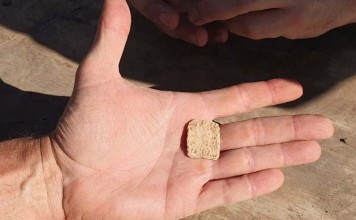