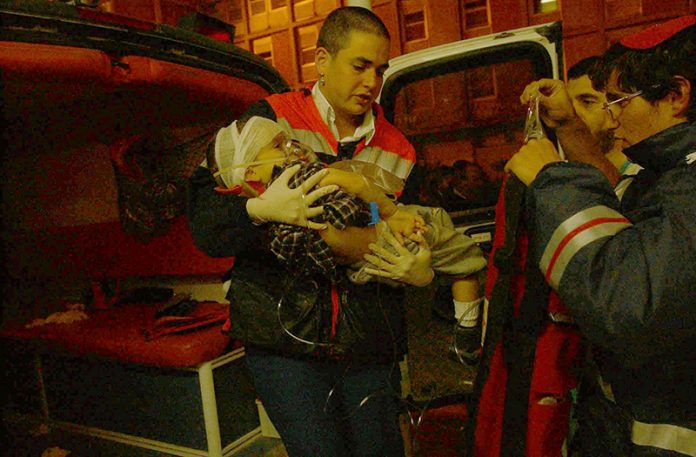 Dovid Rubin and his then three-year-old son Ruby were on their way home from Yerushalayim to Shilo. They had spent the last day of Chanukah at the dentist and then a late lunch. Around 5:30 p.m. they started home on Route 60 North (also known as the Ramallah Bypass Road), a road they had traveled on many times. It was already dark and quite empty of cars.

At 6:00 p.m. the news came on and Dovid heard about a shooting attack. Within seconds, their car was hit by a barrage of bullets from the right side of the road. Dovid felt the hit in his left leg and the most incredible pain. The engine had stopped, and the car was coasting downhill. The shooting continued. Dovid tried starting the car again, but it wouldn’t start. He switched to neutral and turned the ignition. Baruch Hashem, the car started.


That’s when he remembered Ruby. When Dovid turned around, he saw that Ruby wasn’t moving and not responding to his name, but was breathing and looking right at Dovid. As there was no blood, Dovid surmised that Ruby was in shock.

Meanwhile, Dovid was bleeding heavily and realized that he had to drive to Ofra, the closest settlement, which was about six minutes away. He hit the accelerator while pressing on the special emergency radio button that had been installed in his car. There was no response.

As Dovid sped past Tal Binyamin, the lookout post where Binyamin and Talia Kahane had been murdered one year before, he heard the emergency radio calling to him, “D-O-D-1 (his code) Lisa Rubin is calling you.” Dovid was totally confused. Here he was bleeding profusely, not getting a response to his emergency appeal for help and now they were calling to tell him that his wife, who knew nothing about what had transpired, was attempting to reach him. (He later learned that indeed his call had been received and one of the security services had called his wife Lisa to let her know that they were trying to find out what had happened.) In Ofra, Dovid pulled up to the security booth, opened the car door and started shouting for an ambulance. A young woman, who had heard Dovid, yelled and ran over to help. This attracted a crowd that included a medic who managed to wrap Dovid’s leg while he was still in the car.

Ruby was taken out of the car and began to cry; the medic realized that he had been wounded in his neck. For the first time since the attack, Dovid cried. Within several minutes the ambulance arrived.

At the hospital. Dovid was told that a bullet, apparently from a Kalashnikov assault rifle, had penetrated his lower left leg. It had created two massive holes that would require more operations in the ensuing weeks to do skin grafts. Ruby had been struck by a bullet, which had gone through his neck, entering from above, and causing a skull fracture and internal bleeding in the cerebellum, the part of the brain that controls balance and sleep.

Following successful surgeries, Ruby was placed in the pediatric intensive care unit in a separate building. Dovid was placed in the plastic surgery department in the main building and was not able to see Ruby for 1½ days, something very hard for Ruby.

As Dovid was the 1000th victim of that intifada to be hospitalized in Hadassah Ein Kerem, the media wanted to interview and photograph him. The P.R. director said that if Dovid preferred to have their privacy respected, the director would keep the press away. Dovid said that if the news coverage wouldn’t affect their treatment, then he would agree to be interviewed. For the next 24 hours, Dovid delivered messages to the mostly Israeli media, “What happened to us was a national tragedy, not because it happened to us, but because it’s affected thousands of people who are only trying to live their daily lives….”

Dovid notified his brother in Manhattan that he and Ruby had been wounded in a terrorist attack. His brother traveled to Brooklyn to personally tell their mother. The next day, news of the attack was on CBS News.

Ruby spent 2½ weeks in the hospital, while Dovid was hospitalized for three. While in the hospital, Dovid spoke a lot. “It was my therapy. I got over my trauma,” he said. During the first few weeks after the terrorist attack, Ruby responded only to Dovid and Lisa; not to his siblings or to pictures that his friends from nursery school had drawn for him. Mention of his friends’ names just drew a blank stare as he had some memory loss for a couple of weeks.

The first week at home, Ruby had nightmares. He’d only allow Lisa to hold him; he didn’t want Dovid, who would hobble on his walker down the hall. Despite how close the two of them are – once when Dovid needed to be away for a week, Lisa told him he had to take Ruby along because he couldn’t be without Dovid – Ruby only wanted his mother. Dovid wondered if his not being able to protect Ruby from the terrorists had eroded Ruby’s sense of security that he had previously felt when he was with his father.

A few weeks after being discharged from the hospital, Ruby stood inside a large toy bus. “It’s an ambulance,” he said.

Dovid decided this would be a good opportunity for some play therapy. Dovid responded, “Really? Who’s in the ambulance?”

There were two dolls inside. Ruby said, “It’s a baby and he’s been shot. Arabs shot him.”

Dovid asked, “Who’s the other doll?”

Ruby answered, “It’s the Abba. He was shot in the leg.” This was repeated a few times.

Dovid had put press clippings, get well cards and photos related to the attack into an album. “That really opened Ruby up,” explained Dovid. “He only wanted to look at the photos. He was obsessed with it.” The role-playing and looking and talking about the album helped quell the nightmares. “Our relationship became close again,” said Dovid. Not only did his relationship with his son become closer, but his relationship to his Maker became closer as well. Dovid stated, “We have two kinds of miracles, haniglot and ha’nistarot. The Arabs were shooting from the right side, but it was my left leg that got shot. I was still able to drive. Ruby was shot through the neck where it meets the head. The surgeon said that if the bullet had gone one millimeter further in, that would have been the end. Moreover, a few days after the attack I wondered what had happened to my car and I tried to track it down. Five days after the shooting, my car mechanic called me at the hospital and said, “There’s one thing I don’t understand. We can’t start the car.”

Dovid told me, “I can’t explain it any other way than an act of Hashem. There was 20,000 shekel of damage to the engine alone. There’s no rational reason that the car should have started again the night of the attack.

“Some people may look at me with a raised eyebrow, but I don’t regret having gone through the experience. I feel like I was connected to the Shechinah in a very personal way. I was always skeptical of personal miracle stories. Perhaps this happened to us in order to strengthen my emunah. We’ve been blessed. We can’t view it any other way. It’s amazing.”

In chapter 18 of Sefer Yehoshua, Bnei Yisrael are gathered in Shilo and the mishkan is resting there. Seven of the tribes have not divided up their inheritance. In the third pasuk Yehoshua says to them, “For how long are you going to be weak and fearful about coming and inheriting the land which Hashem has given you?” Dovid explained, “I see this as analogous to the situation today. We’re being given the chance of doing teshuva in a national sense – in taking our land – and in a personal sense by learning Torah and doing mitzvos. Hashem is waiting for us to do our part.”

Shiloh Israel Children’s Fund was established by Dovid Rubin with the goal of healing the trauma of the terror victim children, as well as restoring the lost innocence of childhood. The organization’s program integrates therapy and education and services over 3,000 children in the biblical heartland of Israel. Donations are welcome! For more information, go to www.ShilohIsraelChildren.org.