Dr. Hagai Ben Artzi – a seventh-generation Yerushalmi – is a lecturer of Tanach, Talmud, and Jewish thought at Bar Ilan University. He is also the older brother of Sara Netanyahu, wife of Israel’s embattled prime minister.

As a teenager, he decided to become a baal teshuvah, and his opinions are as cutting as the Sages of the Gemara. So cutting, in fact, that he has often harshly criticized his brother-in-law and, as a result, has not spoken to his sister for over 10 years.


“After I won the Israel National Tanach Competition as a teenager, my father and I were invited to the home of David Ben-Gurion,” he told The Jewish Press. “There, in Kibbutz Sde Boker, I met a Jewish leader who quoted from the prophets of Israel and lived in a very spartan style without luxuries, without champagne and cigars. ‘That’s how a Jewish leader should live,’ my father told me. If a leader of Israel acts in a flamboyant fashion, he can get himself in trouble, as we’ve seen.”

The Jewish Press: You were very critical of Bibi when he ceded the greater part of Chevron to the Palestinian Authority went ahead with the Gilad Shalit prisoner exchange. Why?

Dr. Ben Artzi: Chevron is the City of our Patriarchs, the cradle of Jewish history. You don’t give it to an enemy to satisfy America.

And the Galit swap was sheer madness. Over 1,000 terrorists were set free and a large number returned to commit acts of terror and killing, just as we warned.

In both cases, Bibi caved in to pressure. He always strives to be in line with the nation, but when a sizable and very vocal part of the nation lives in a materialistic fashion without solid spiritual roots, you sink to their level if you follow after them.

In the past, before your “cold war” with the Netanyahus, you worked with Bibi as a speechwriter and close advisor. In your opinion, will the prime minister cave into pressure from U.S. President Trump, who apparently will soon be presenting a peace deal that calls for the formation of a Palestinian state?

There is a danger that such a horrible scenario could develop, but with all of my criticism of my brother-in-law’s pandering to public opinion, I still think he is the best choice to lead the country with all of the many challenges before us.

Bibi was raised as a lover of Zion, steeped in the spirit of Zionism, and while his father, Benzion Netanyahu, wasn’t religious in his early life, he was a staunch Revisionist, a protégé of Ze’ev Jabotinsky and a scholar in Jewish history.

Bibi’s grandfather, Rabbi Nathan Mileikowsky, was a larger-than-life personality who would be called a militarist today. During the Stavsky trial, he was the first rabbi to speak out on Stavsky’s behalf, declaring his innocence, and sharply criticizing the Mapainiks for their blood-libel campaign against the Revisionists.

Can you elaborate? Not all readers are familiar with the Stavsky affair.

In 1933, Chaim Arlozoroff, a rising star in the Jewish Agency and a threat to Ben Gurion’s rule of the Mapai Party, was murdered in Tel Aviv while taking a nighttime stroll with his wife, Sima.

Immediately following the shooting, Mrs. Arlozoroff told police officers that two Arabs had shot her husband. Before dying in the hospital, Arlozoroff also confirmed that the assailants were Arabs.

A day later, however, after conferring with Mapai and Jewish Agency leaders, his wife changed her story and said the murderers were Jews. Members of Mapai Party and the leftist media immediately accused the Revisionists of the crime. The blood libel spread throughout the country, aided by the British who disliked the outspoken opposition of militant Revisionists to their rule over Palestine.

As I mentioned, Bibi’s grandfather, Rabbi Mileikowsky, protested against the biased trial of [Abraham Stavsky] and the sentence of execution by hanging. At that time, there was no major rightest newspaper in Palestine to combat the lies and propaganda of the Left, so Benzion Netanyahu started the widely-distributed newspaper, HaYarden, which he wrote and edited with a small staff. Finally, through the efforts of Rabbi Kook and Jabotinsky, a retrial led to the innocent Stavsky’s acquittal.

No doubt, Bibi’s worldview was influenced by this squalid witch-hunt, which divided the yishuv in half and threatened the entire Zionist undertaking. I think he envisions his life task as remaining the prime minister of Israel as long as he can in order to prevent the Left from regaining control over the country.

Given this background, it’s surprising that Bibi hasn’t done more to weaken the influence of the leftist media in Israel. He complains about them, but hasn’t taken real steps to change the situation, continuing to channel government funds to pay for their broadcasts against him.

To his credit, he has effected some changes, especially in helping to establish the more rightest newspaper, Yisrael HaYom, and TV Channel 20.

You have written historical accounts about the establishment of the state, the Six-Day War, and the Yom Kippur War, as well as Megillat Chanukah in a popular, easy-to-read format. If you were to write a commentary on Megillat Esther, what main, relevant-to-our-time point would you stress?

The decree fell upon the Jews of Persia because the time had come to return to the Land of Israel to rebuild the Beit HaMikdash, but they chose to remain in a foreign land. In the classic treatise, Kuzari, Rabbi Yehuda HaLevi writes:

“This is the sin which kept the Divine blessing from gracing the Second Temple. Divine Providence was ready to restore everything as it had been at first if all of the Jews had consented willingly to return. But only a small portion did so, while the majority and the aristocracy amongst them remained in Babylon, preferring dependence on foreigners and cultural slavery, unwilling to leave their houses and their lucrative affairs.”

I am afraid that we suffer from the same unwillingness today. May the day soon come when we witness the complete ingathering which we pray for and the rebuilding of the beit hamikdash. 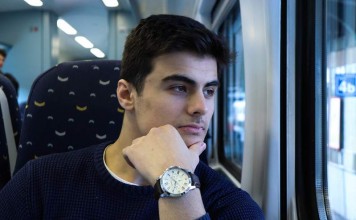