This article was originally published on June 26, 2019.

Last month, 51 years ago, Rabbi Meir Kahane founded the Jewish Defense League (JDL). Its purpose was to fight for Jewish causes with as much gusto and pride as radical blacks and other groups were fighting for their causes.


Shifra Hoffman, founder of Shuva and Victims of Arab Terror, worked alongside Rabbi Kahane for many years. In a recent interview with The Jewish Press, she reflected on some of her JDL activities and JDL ideology.

The Jewish Press: How did you get involved in the JDL?

Hoffman: I had written a poem, “Ode to Rabbi Meir” [in the early 1970s], and decided to ask Rabbi Kahane to autograph it. I had never met him and hadn’t seen any pictures of him, so I thought of him as an old, wise man with a long beard.

When I arrived at the JDL’s offices, the secretary said Rabbi Kahane was busy, so I decided to wait. Then the door opened and a man walked out. He must have been about 35 years old, so I ran up to him and said, “Have you finished speaking to Rabbi Kahane? I need to speak to him after you’re done.”

My jaw dropped, and all I could do was put the paper in his hand and run away. But he was a speed reader and said, “You wrote this?” I said, “Yes.” He said, “I have to go back to Israel to run for Knesset, but I need good people here [in the States].” So that was the beginning of my association with Rabbi Kahane, which I value more than I can express.

What did you do for the JDL?

Rabbi Kahane was always in prison [for JDL-related activities], so he sent me to speak on his behalf throughout the United States. I also had a radio show that was very popular called “Jewish News and Views.”

At one point, Rabbi Kahane was arrested because he had sent a letter to JDL supporters asking us to make things hard for Leonid Brezhnev [the Soviet premier] during his visit to the United States [so that he would agree to let Jews leave the Soviet Union].

The letter was intercepted by the Israeli government, which handed it over to the Attorney General in America. Rabbi Kahane faced five years in prison for sending that letter. In court, the judge said, “If you stop your activities against Soviet Jews, maybe we can reduce your sentence.” Rabbi Kahane replied before a packed courtroom:

“Your honor, I don’t want to go to jail. But right now, I face you. You are a judge of flesh and blood. One day, we will all face the Judge of all Judges and he will ask me, ‘Meir Kahane, what did you do when three million of your brothers were behind the Iron Curtain? So you’re going to have to do what you have to do, and I will continue doing what I have to do.

People in the crowd broke down crying when he said that. The judge sentenced him to one year in a minimum-security prison.

You continued working for him after that?

I never took one shekel for my work. But yes, I was the liaison for some of his books, and when he ran for the Knesset, I organized many of the fundraisers.

They banned him in 1988. He would have had 13 seats in the Knesset. But he never showed defeat and went on with his program.

You founded Shuva to encourage Jews to move to Israel, a cause that Rabbi Kahane advanced as well. Both he and you argued that we should move to Israel because we face another potential Holocaust in America. Is that really true?

When the Nazis marched in Skokie in 1977, we organized a protest, and someone in the media asked me, “Don’t you think, Mrs. Hoffman, that you’re paranoid? There are only a few Nazis in America, after all.” I replied, “Paranoid Jews live longer.” Rabbi Kahane loved using that line.

Why do you think there will be another Holocaust?

Today you see anti-Semitism everywhere. As the economy gets worse, Nazism grows, and I’m amazed that people don’t understand that. After what happened in Pittsburgh, I thought Jews would pack their suitcases and come home, but they delude themselves.

So no, it’s not here yet, but the seeds are here, and Jews need to get out.

Rabbi Kahane predicted a Holocaust in America in the 1970s, which never came about. Why are you so convinced one will happen now?

If you open up a computer, you’ll see that anti-Semitism in America is on the rise. It’s there in print. It’s all documented. Jews are being attacked and murdered, swastikas are being painted on synagogues, and Jews are afraid on college campuses.

In Crown Heights alone there have been dozens of attacks over the last few months. They attack chassidim because they are visible. I say: If you want to remain, don’t complain! We have a home and we should be there.

Your solution is to move to Israel, but Israel is practically the only country in the world where Jews are regularly killed for being Jewish.

First of all, even if there were no anti-Semitism, a Jew has the privilege today after 2,000 years – not only the obligation – to come home to Israel. So have a little pride. Know that G-d Almighty answered our prayers.

But secondly, Israel doesn’t have to be dangerous. We have a very weak government that does not do what has to be done against Arab murderers. Have you ever heard of a country that releases murderers? They release them to prisons like a hotel with all kinds of amenities and then they get a certificate to teach when they come out from prison. It’s insane!

It says in the Torah that when G-d wants to punish us, he inflicts us with madness and blindness. That’s what’s happened here. The land of Israel was only given to the Jews. Other people have the right to be here as a gerei toshav – as it says in the Torah – but not to chase us out of our own country and murder us.

Why would you tell me to come to a country that has a government that won’t protect me as a Jew?

I came here because G-d Almighty said we should be here, and I believe that if G-d sees us here, He will change the situation for us.

It says so very clearly [in the Torah]. G-d says: I told my children what they’re supposed to do; they didn’t listen, so I let them go their own way. That’s what happened in the past generation. Jews had the opportunity to go home to Israel but didn’t.

This is our home. Whom did Hashem give it to – the Arabs? The point is: Either we believe that G-d gave us this land and we should be here or we don’t believe it. Rabbi Kahane said we cannot have geulah and the galut. They are mutually exclusive. 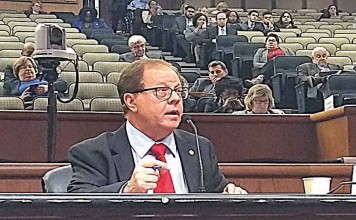 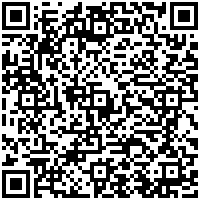