“Who was my father?” “Who am I?” “What is identity?” These are the questions that prompted pianist Carolyn Enger to produce The Mischlinge Expose, a many-layered multimedia performance that centers around family history, personal experience and Judaism.

“Our house was filled with secrets, but children pick up what their parents don’t tell them,” says Carolyn. Her voice is gentle. She pauses sometimes to find the precise word to convey the nuances, like a pianist searching for the exact chord. Carolyn’s father, Horace (Horst Joachim) Enger, was, in fact, Jewish. His Jewish mother had converted to Evangelical Christianity in 1919 in Breslau after marrying her husband Kurt Enger. Horst grew up as a Christian in Germany, staunch in the belief that all religions are political. Six years after arriving in America in 1947, he married Elaine Saunders, a Presbyterian from Philadelphia. They set up an American Christian home in Tenafly, New Jersey, filled with American Christian children. Carolyn was baptized in a Methodist church. But Judaism was a silent, resonating presence. The Nazi label Mischling, slapped on by Nazi policy, obviously had no regard for Jewish law, and yet it stuck. “My father, like other Mischlinge, was neither here, nor there,” says Carolyn.

The Mischlinge are a little-known group. Mischling (plural Mischlinge) was the legal term used in Nazi Germany to denote someone with both Aryan and Jewish ancestry. The word has the general denotation of hybrid, mongrel or half-breed. As defined by the Nuremberg Laws in 1935, a Jew was a person who had at least three grandparents who had been enrolled with a Jewish congregation. A person with two Jewish grandparents was also legally “Jewish” if that person met certain conditions, such as marriage to a Jew. But what about anyone else with Jewish ancestry? A person who did not belong to any of these categories, but had two Jewish grandparents, was classified as a Mischling of the first degree. A person with only one Jewish grandparent was classified as a Mischling of the second degree. The 19th century saw many Jewish Germans converting to Christianity, most of them becoming Protestants rather than Catholics. According to the 1939 Reich census, there were about 72,000 Mischlinge of the first degree and about 39,000 of the second degree. Many of the Mischlinge went to court to try to them reorganized.

Horace Enger and Rosemarie Steinfeld, Carolyn’s godmother, were both branded with the Mischlinge label. For Horace, the label meant that he was stripped of his German army uniform. In 1944, he was sent to a forced labor camp. The official purpose of those interned in the camp was to dig trenches to stop the Russian tanks. In fact, the Nazis’ goal was to exterminate these mixed-blood people. After the war, Horace decided to head west. Enamored with American jazz, Horace felt that a country with such fine music would be a good place to live. The Church World Services sponsored his emigration to the USA with his first wife, Ursala (Engel), a Mischling whose father had been Jewish. “The Jewish agencies, pressed to their limits with refugee requests for help to leave Europe, gave Mischlinge a lower priority as they were overloaded with Jewish refugees,” says Carolyn.

Living the average American dream should have quieted any questions about identity that hummed in Carolyn’s subconscious. Instead, every now and again, dissonance sounded. The ring of Judaism was impossible to muffle. “I wasn’t actively searching for anything, but there were a couple of incidents in my childhood that I can’t explain,” says Carolyn. Sunday school was part and parcel of Carolyn’s years in elementary school. One Sunday, as an introduction to Easter, the teacher told the class about Passover and the Exodus from Egypt. “We bake matzah on rocks,” young Carolyn declared. Years later, now in high school, Carolyn’s best friend invited her to attend her family Seder. “I felt very comfortable here,” she says. And then, in 10th grade, Carolyn attended a viewing of Night and Fog, a French documentary of the death camps of the Final Solution and the hellish world of dehumanization and death. Carolyn was left in uncontrollable sobs. “I realized that I identified myself as Jewish,” she says.

In college, Carolyn transferred to a Catholic school, Molloy College, in order to remain under the tutelage of her piano teacher who had received a position in the school. Here, she attended an introductory class on Judaism given by a Reform rabbi. The knowledge she gained strengthened her link to Judaism. An increased commitment to some Jewish rites, such as lighting Shabbos candles, didn’t feel like a big step, because “I already identified myself as Jewish,” says Carolyn. “When I lit candles, I felt myself connecting to my grandmother Charlotte, whose name bears a close resemblance to mine,” she adds. (Her father wanted to name her Charlotte, but her mother didn’t like the nickname Lotte. That’s how she ended up with Carolyn.)

Sometime in the ‘80s, Carolyn’s father traveled to Germany to attend the funeral of Carolyn’s Aryan grandfather. He returned with a notebook filled with German documents, stamps and insignia. “I was curious and frightened at the same time,” Carolyn says. Shortly afterwards, Carolyn turned eighteen. “My father must have felt that I was ready to hear all about his past, because he told me everything. I kept asking him to repeat the details because I couldn’t absorb what he was saying,” she recalls. The stage had been set.

After her father’s death in 2013, Carolyn began to put together a multi-media presentation that explores the question of identity. “I wanted to give my father’s experience a voice, to understand him better,” she says. Carolyn’s calling as a pianist (she has performed in venues from New York’s Carnegie Hall to Bruno Walter Auditorium to the National Gallery of Art in DC) adds a compelling angle to her expose.

“I was always a little different. My father would have been happy if I had taken studied something like typesetting, but I was set on being a pianist,” she says with a laugh. As a pianist, set outside much of society’s predictability, Carolyn brings a fresh point of view to the question of identity.

With a background of twenty years of vociferous reading with a focus on German Jewry and the Holocaust, Carolyn decided to widen her portrayal of personal identity to include the question about identity in general. And so, The Mischlinge Expose, with Carolyn’s haunting musical accompaniment, pushes us to think about how a person’s identity is formed.

Using interviews, photos, film footage, music of prominent Jewish German composers and quotes, Carolyn dares us to ask questions about Nazi Germany. “I wanted to try and begin to understand the unfathomable: How did such evil come about?” she says.

From Jew to Christian

In an effort to delve deeper into the tension lived out by those labeled Mischlinge, Carolyn turned the clock back to the salon era in the 19th century which saw many prominent Jews turning their back on their heritage in order to advance their social and professional positions and trying to straddle two worlds. As an artist, Carolyn is naturally drawn to Jewish artists, in particular poets and composers who converted to Christianity. “Did they feel the tension of their Jewish roots?” Carolyn asks.

Woven into the tapestry of the expose, Carolyn presents the music and literary works of these people.

Felix Mendelssohn. German composer, pianist, organist and conductor of the early Romantic period, Mendelssohn was a grandson of the philosopher Moses Mendelssohn. His parents were Jewish, but baptized their two sons and two daughters. Although he never lived as a Jew, the two biblically-inspired oratorios he produced in the last year of his life seem to be an attempt at reconciling his Jewish heritage with his adopted identity.

Arnold Schoenberg. Austrian composer, music theorist and painter, Schoenberg was born into a Jewish family but in 1898 converted to Christianity in the Lutheran church. Apparently he was motivated both by his desire to strengthen his attachment to Western European cultural traditions and by his hope to find refuge from anti-Semitism. In 1933, however, in Paris, he returned to Judaism. He realized that “his racial and religious heritage was inescapable.”

Gustav Mahler. Born into a Jewish family in Bohemia, Mahler converted to Christianity to become head of the Vienna Opera, married a non-Jewish wife and was buried by a Catholic priest. The racial abuse against him never abetted and Mahler could never forget his Jewish roots.

Heinrich Heine. Considered the best of German poets, Heine converted in 1825. Long after he became an outcast in German society, his poem, “Lorelei,” minus acknowledgement of his authorship, continued to be recited by German children. Acknowledging that his conversion was simply a means of advancing his career, Heine insisted that he was “merely baptized, not converted.” In his last will, he declared his belief in an Only God whose mercy he supplicated for his immortal soul.

Rahel Varnhagen. A German socialite, Varnhagen converted two days before marrying her husband Karl. She fled madly from her Jewish roots until the very day of her death, when she declared, “The thing which all of my life seemed to me the greatest shame, which was the misery and misfortune of my life – being born a Jewess – this I should on no account now wish to have missed.”

Certainly, The Mischlinge Expose movingly examines the question of identity. While it showcases the tension and agitation felt by the converts of the salon period, it also shows how the Mischlinge, and those who converted to try and escape the label that the Nazis had given them, were tied to their destiny. This destiny comes full circle in The Mischlinge Expose.

Given her affiliation for Judaism, it isn’t surprising that in 1999, sometime during her first marriage, Carolyn decided to undergo a Reform conversion so as to put some sort of stamp of approval on her own identity. “Answering the question ‘Who are you?’ always involved a long explanation. I wanted a one word answer,” she says.

After her first marriage dissolved, someone threw out a comment that was to change Carolyn’s life: “You know that you aren’t really Jewish.”

“I didn’t want to keep on feeling like an outsider looking in. I was determined never to hear that question again,” Carolyn says. And so she took a step that no one could ever doubt. In 2010, Carolyn underwent an Orthodox conversion and today she is married to a Jew of Syrian descent.

The Mischlinge Expose captures the struggle to form identity. Crystallizing that identity is a task that each and every one of us faces. “More than ever before, in the mixing pot of today, the question of identity is very real and relevant,” says Carolyn. By bringing the Mischlinge story to light and by introducing the viewer to the struggle faced by another, Carolyn hopes to erase the lines that divide us and inspire people to feel at peace. “My message is that you cannot hate someone simply because he is the other,” she says. 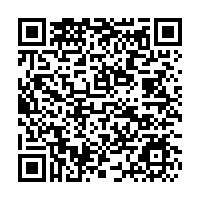