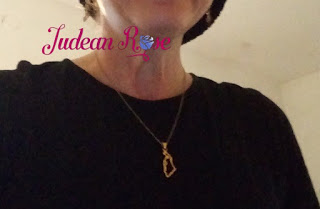 For a really long time, I wanted an Israel necklace with a pendant depicting the shape of the State of Israel. I thought this would be a unique way of expressing my love for the Jewish State. Everyone has a Star of David necklace, but not everyone has a State of Israel necklace. They are different. I wanted one, and I decided that if I got one, I would put it on and never take it off.

Dov took me out for dinner on my 57th birthday, and when we were done, we walked around Jerusalem and happened to pass a jewelry store that was still open. We went in and I picked out a simple gold chain and pendant. It’s just an outline of the Jewish State, unpretentious, simple. I like it. And the only time I have removed it was during a medical procedure.

It takes time to get used to wearing something around your neck 24/7; sleeping with a chain isn’t comfortable at first. But I knew that after a while, I wouldn’t even feel the necklace. And I don’t, though in my waking hours, my fingers often wander up to the pendant, to feel its distinctive shape with my fingers, or to adjust the chain.

I love my necklace because I love my country. Which is why it was so disturbing when my son Aharon drew my attention to a website called PaliRoots. The website and its Facebook page market things with the same shape you see on my necklace—the shape of Israel—except they are calling it “Palestine.” They boast that they are “The first and only brand in the world that seeks to cultivate education and awareness about the unique Palestinian culture and traditions.”

Except that they are doing no such thing. Instead, they are pushing the modern State of Israel as if it were a place called “Palestine.” It is obvious that the items they are selling depict the Jewish State, because there never was a place with these same borders called “Palestine.”

Which makes it all a huge lie.

I decided I wanted to demonstrate for the people at PaliRoots what their stock would look like, if they were being honest. So I asked a daughter and a friend’s son to render sketches of these items using the 1920 map of the British Mandate for Palestine. Here are side-by-side pictures of PaliRoots items with how they should really look, rendered in pencil by my daughter and by Mark David Cherney. 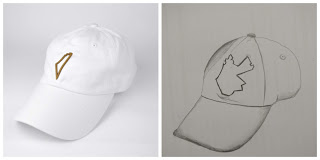 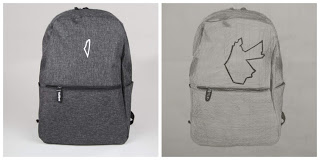 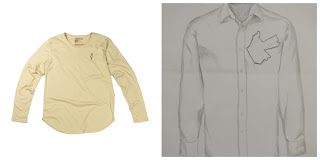 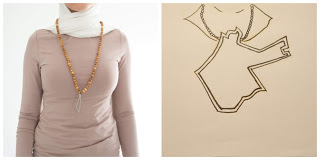 I want to encourage PaliRoots to develop a new line based on these sketches. They don’t need to credit me, my anonymous daughter, or Mark David Cherney. Having a more honest line of stock will be thanks enough.

But as things stand at PaliRoots, there are two rhetorical questions we need to ask:

Do they want all of the territory? Or do they just want Israel? Because if they just want Israel, it’s because they don’t want the Jews to have it and because they don’t want the Jews to live on land they deem part of the Islamic caliphate. Because otherwise it makes no historical or territorial sense to sell items with the shape of the modern State of Israel, and call that shape “Palestine.”

The PaliRoots endeavor, it is clear to see, is rooted in hate. This is distinct from the purpose of the necklace I never remove from my neck: the necklace I wear as I write this piece. My necklace with its pendant in the shape of the Jewish State was always about love. To be specific, my Israel necklace is about love of country and my nation.

At PaliRoots, on the other hand, the items on display are all about jealousy and hate. They use the shape of Israel as a template for an idea that never was. Stealing that shape and calling it “Palestine” is all about hating the Jews. It’s about denying Jewish history, expelling Jews from Israel, and ridding the world of them once and for all.

It’s about taking what belongs to someone else. And if you want to know the truth, it just shows what losers they are, that they could have had a “Palestine” in some form or another, if they’d just accepted we’d whupped their butts, and taken whatever they could get in negotiations. But that isn’t what they want.

They only want “Not Israel.”