This week, we will all sit at the Seder table – some of us in our homes with our families, some of us on IDF bases, and some of us in the field, protecting the people of Israel so that we can celebrate the Festival of Freedom in peace.

3,326 years ago, our nation celebrated its miraculous release from slavery in Egypt, an event which marked the beginning of the journey to the land of Israel. The journey was long and arduous, and full of ups and downs, but in the end an entire nation walked to freedom.


There are those who see the exodus from Egypt as something much more than the salvation of a people from cruel oppressors. This event sent a message of hope that echoed across the world, because for the first time in history, the idea of living as a free people in our land became a possibility.

Egypt did not accept our legitimate claim to freedom, out of a concern that the Egyptian economy, which was based on slavery, would collapse. For many generations afterwards, slavery was perpetuated by regimes and cultures around the globe. But the people of Israel’s cry continued to be heard throughout the world, and turned the world into a better place. It wasn’t for nothing that the leaders of the anti-slavery movement in the United States chose as their rallying cry the eternal words of Moses: “Let my people go” (Exodus 5:1). The torch of freedom that was carried by the people of Israel is to this day still the source of inspiration for enslaved nations, who aspire to freedom and liberty.

The gift of freedom and independence was not given to us on a silver platter. The exodus from Egypt obligated us to free ourselves from the mentality of slavery, and to adopt the consciousness of a free people. The continuation of the journey, in the desert and even within the land of Israel, required both natural and personal sacrifice. Fighting enemies of the state requires self-sacrifice, and adhering to the values of morality and justice requires inner strength.

Despite the inherent difficulties, this is the meaning of true freedom – that a person, and even a nation, can live their lives according to their true natures. Maimonides elaborates and says that the essential difficulty of the transition from slavery to freedom was the willingness to take up arms and fight for freedom. Nothing has changed. Natan Sharansky, who was a Prisoner of Zion in the Soviet Union, sat in Soviet prison for nine years. Who was truly the free person – the judge, who was obligated by the regime to find Sharansky guilty, or Sharansky himself, whose body was imprisoned, but who stayed true to his beliefs and his values? Sharansky gave the answer at his trial: “I am the only free person in this court.”

Our soldiers are the same. A soldier could be standing at a guard post far away from home, but he is a truly free person – because he is faithful to his values and is protecting the freedom of the nation. We, soldiers of the IDF, who stand guard over the people and the land, fulfill the hopes of the millions of Jewish people across the generations who sought freedom. They hid in cellars from the horrors of the Inquisition, and they hid in fear of the cruelty of the Cossacks. Despite all of this, they reclined and ate like princes, simple matza made of flour and water that didn’t rise – the matza that symbolizes the pure nature of man. They yearned for the days when freedom would overcome slavery, and prayed that the next year would be in Jerusalem. 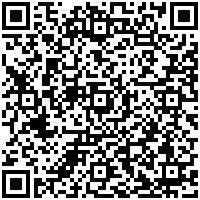