The incoming government has promised to invest in the Arab sector and also to possibly recognize several Bedouin villages in the Negev as part of the coalition agreement with the Ra’am Party.

Mansour Abbas has been praised for his flexibility and willingness to join a coalition government, breaking with his former Joint List partners and paving the way for active participation in the government. He has also been praised by Arabs in Israel. Moussa Al-Zaydana of Rahat, a large town populated mostly by Bedouin, said Abbas should be commended.


Ra’am has many supporters among the Bedouin communities in the South, which is considered a stronghold for the more conservative Islamic politics that Ra’am emerged from. To show its voters that it achieved something by taking the plunge to engage with Zionist parties, Abbas has sought to stop demolition of illegal buildings in the South and pave the way for a deal that will provide recognition for the many Bedouin communities that live off the grid in the South.

However, this potential deal has come in for scathing criticism from Regavim, which calls itself a public movement dedicated to the protection of Israel’s “national lands and resources.”

Regavim says that Israel may now be seeing the “whitewashing of thousands of illegal structures on about 11,000 dunams [2,718 acres] of land.” It slams the idea that this will create “new communities.” It notes the coalition agreement does not stipulate what “will happen to the rest of the illegal Bedouin squatter’s camps nine months from now.”

The coalition agreements place both the Bedouin Settlement Authority and the Knesset Interior Committee under the “complete control of the left-wing bloc and Ra’am,” according to Regavim. This represents a destructive potential that could lead to “total abandonment of the Negev while rewarding rampant illegal Bedouin construction that imperils the healthy development of the Negev.”

The rise of the new coalition has led to many hysterical critiques, especially from the far-right and ultra-Orthodox religious sectors. Even among many Arab voters and the Joint List supporters, there is not much hope that Ra’am’s visionary decision to enter a coalition will turn out well.

Numerous Israeli governments have faced questions about how best to work with Bedouin communities in Israel and especially how to manage the rapid growth of Bedouin towns and villages in the Negev.

In the 1950s, in the wake of the 1948 War of Independence, there were a relatively small number of Bedouin who remained in the Negev, estimated at between ten to twenty thousand people.

In those years the military was used sometimes to frighten and expel Bedouin from areas along the borders or areas the military needed. Moshe Dayan was key to some of these incidents. The Bedouin were controlled by the military in an area called the Sayigh, a kind of reservation covering 1.2 million dunams (296,532 acres), a product of the overall military administration and curfew systems Arabs in Israel were subjected to in that era.

Later, after the 1960s, as the Bedouin community grew and Jewish towns and kibbutzim expanded in the Negev, the country adopted a new policy to settle and legalize several planned towns for Bedouin.

The Israeli policy derived in part from the British, who had sought to sedentarize and control the Bedouin, mapping their tents and areas and passing laws to keep them from migrating and pasturing animals wherever they pleased. Israel brought socialist-style planning and building concepts to the map.

Seven planned towns and 11 recognized villages would eventually emerge. Tel Sheva was first in the late 1960s, followed by Rahat in 1972 and more in 1982. More than 100,000 people would eventually live in these sprawling cities. But the thousands who remained outside the planned towns soon mushroomed into another 50 unrecognized villages, really more like endless sprawling farms and communities, which have a population of more than 80,000 people.

The huge number of unrecognized villages, and tens of thousands of hectares being used by them, have numerous ramifications. Education and services are not provided sufficiently to the communities. They lack things like rocket-warning sirens, and there is a lack of law and order. Jewish communities complain about the rising lawlessness, thefts and even gun violence.

During the recent clashes in May in mixed towns in Israel, in the Negev there were protests and riots that led to the closure of major roads between the Negev and the rest of Israel.

Videos showing Bedouin with machine guns and other illegal weapons have shocked Israeli media over the years. Army bases complain of thefts of weapons, and soldiers claim they are given orders not to respond with force. For critics, this is lawlessness. For sympathizers, it is an end result of what happens when there is racism and neglect.

In 2011 Israel began to study and put forward a plan, dubbed the Prawer Plan, to alleviate the challenges of the Negev. It was supposed to provide a budget of some NIS 8 billion to help relocate some 40,000 Bedouin to recognized communities while normalizing other communities.

Left-wing NGOs were outraged. Adalah wrote that “if fully implemented, the Prawer-Begin Plan will result in the destruction of 35 ‘unrecognized’ Arab Bedouin villages, the forced displacement of up to 70,000 Arab Bedouin citizens of Israel, and the dispossession of their historical lands in the Naqab. Despite the Arab Bedouin community’s complete rejection of the plan and strong disapproval from the international community and human rights groups, the Prawer Plan is happening now.”

The plan was scuttled in favor of doing nothing.

For the Left and sympathizers of the Bedouin, this was a victory. The Bedouin were said to be “indigenous,” and groups like Human Rights Watch and even the UN rushed to try to protect the Bedouin rights and claims.

With the plan to resettle and deal with the Negev gone, Israel continued to demolish some structures here and there in the Negev. Araqeeb, one small community, was bulldozed 184 times by March 2021. Clashes in Umm al-Hiran resulted in a Bedouin man named Yaqub Abu al-Qia’an being killed.

Meanwhile the Bedouin community living off the grid continues to grow. Only 2% of Bedouin communities were vaccinated against Covid by late February 2021, and surveys showed 60% were against the vaccines. This is a product of having some 100,000 people living outside of normal state communities, without basic services, schools or connections to the government.

In addition while education has improved among Bedouin and literacy has increased, especially among women, many Bedouin go abroad for college, and marry Palestinians from the West Bank. One estimate said that not only are there more than 10,000 Palestinians residing among the Bedouin, but 18,000 were born of marriages where one parent is not Israeli.

Like many things, basic data are not always clear, but it does appear that foreign funding has also come into the Negev in the form of religious education and mosque construction, leading to concerns of radicalization.

For others this would simply show that the vacuum of Israel’s state authorities, which don’t bother to plan or provide services, has led to others stepping, including Islamic charities and NGOs. New mosques have risen as well, some of which Israel has demolished when they were built without permits.

Throughout the decade of the Netanyahu era, there has been no progress or attempt to normalize the vast number of unrecognized houses and communities in the Negev. Like much of the Arab sector in Israel, the majority of some communities live in homes constructed without permits, ostensibly under threat of demolition, paying little to no arnona (property tax), lacking basic things like street names and mail delivery.

The goal has been to manage the lawlessness, demolish a few structures here and there, missing the forest for the trees, maintain just enough law and order so that there are not more killings, but not enough so that thefts from Israel’s largest and most sensitive bases, such as Tze’elim and Nevatim, are punished. IDF bases are “easy pickings,” says Ynet, and Israel Hayom wondered in February how Israel would fight a war if it can’t secure its own bases.

The incoming government might try a different approach, actually working with Bedouin communities and seeking to legalize some houses so that they are officially on the map.

This will be met with protests by the far Right, which objects to this legalization or compromise. In the coming months, it will likely be one of the more contentious issues facing the government, after it takes office next week. 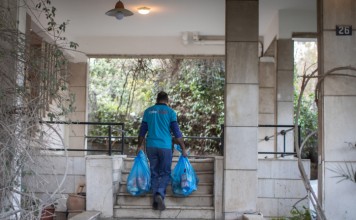