After the discovery of the first coronavirus cases in the Hamas-ruled Gaza Strip, the Palestinian Authority (PA) is ignoring appeals to lift a series of sanctions it imposed on the two million Palestinians living there. Actually, the PA leadership has done virtually nothing to help the Gaza Strip confront the coronavirus pandemic. Ironically, the only country that has been helping the Gaza Strip in the past few weeks is Israel.


The question is, why is the PA ignoring calls to help the Palestinians of the Gaza Strip in their effort to prevent the spread of the coronavirus? One explanation — that accords with history — is that if a large number of Palestinians living in Gaza there are infected with the disease and there is a huge catastrophe there, the PA leadership wants the world to blame Israel.

The Palestinian Authority has a long record of hiding its own responsibility for the suffering of its people, and instead blaming Israel for the woes of the Gaza Strip.

The moment that the Hamas-controlled Ministry of Health announced the first coronavirus cases in the Gaza Strip on March 22, several international media outlets began talking about Israel’s responsibility for the safety and health of the Palestinians there, even though there has not been a single Jew living in Gaza since they all left the entire area in 2005.

It is important to emphasize that there is no Israeli “siege” on the Gaza Strip. First, the Gaza Strip shares borders not only with Israel, but also with Egypt. It is Egypt, not Israel, that controls the Rafah border crossing between Egypt and the Gaza Strip, and that is effectively blockading Gaza.

In addition, all goods from Israel are allowed to enter the Gaza Strip except for weapons and a short list of dual-use items that could be used by terrorists to attack Israelis. The ban on weapons and the restrictions on dual-use items stems from the fact that, since 2007, the Gaza Strip has been ruled by a terrorist organization, Hamas, whose declared aim is the destruction of Israel, and that has a track record of using, for example, cement, sent for building and repairing homes, instead to construct cross-border tunnels for terrorists to attack Israel.

“Not only do food, medicine, fuel and aid enter freely at all times, but in peacetime, commodities and consumer goods of every type are transferred daily from Israel to the Gaza Strip through the land crossing,” the Israeli Foreign Ministry noted. “A December 2104 report by the PA and the UN provides statistics on life in the Gaza Strip. According to the report, 93.6% of the Gaza Strip’s households own a satellite dish, 93.2% own a washing machine, 90% a refrigerator and 88.2% a television.”

As for Israel’s maritime blockade on the Gaza Strip, the UN has determined that, under international law, it is legal.

In 2011, a special panel convened by UN Secretary-General Ban Ki-moon also found Israel’s naval controls, including their enforcement in international waters, to be legal. “The Israeli naval blockade on the Gaza Strip was imposed as a legitimate security measure to prevent weapons from entering [the Gaza Strip] by sea and its implementation complied with the requirements of international law,” the UN panel said.

The panel of experts emphasized, in addition, that all assistance to the Gaza Strip should be transferred only through the two designated land crossings The UN panel also concluded that Israel had legitimate security concerns regarding violence by Hamas and that weapons trafficking to the Gaza Strip permitted Israel to set restrictions to protect its Mediterranean border.

Despite the outbreak of the coronavirus, the transit of goods between Israel and the Gaza Strip has continued to operate as seamlessly as before. The Israeli Defense Ministry is working to ensure a steady supply of goods reaches the markets and that a normal routine of living is maintained there.

Between March 15 and March 21, a total of 2,547 truckloads of goods entered the Gaza Strip through the Kerem Shalom border crossing with Israel.

Additionally, during the same week, 116 tanker trucks of fuel, 206 tons of medical supplies, 393 tons of agriculture products, 11,457 tons of food, and 48,667 tons of building materials were transferred into the Gaza Strip through the same border crossing.

On March 20, hundreds of additional coronavirus testing kits were delivered by Israel to the Gaza Strip.

Needless to say, no truckloads of any goods or medical supplies or testing kits have entered the Gaza Strip through the Rafah border crossing with Egypt.

In 2017, apparently as part of an effort to undermine his rivals in Hamas, PA President Mahmoud Abbas imposed a series of sanctions on the Gaza Strip. They included cutting salaries of thousands of Palestinian public employees and forcing many others into early retirement, as well as suspending social and health benefits to impoverished families.

Abbas has since rejected many appeals from Palestinians to lift the sanctions he imposed on the Gaza Strip. When Palestinians took to the streets of Ramallah to protest the sanctions, Abbas sent his security forces violently to suppress the protesters with stun grenades, tear gas and clubs.

By March 24, Abbas had still not uttered a word about the situation in the Gaza Strip after the discovery of the first coronavirus cases there. He also has not responded to urgent appeals to lift the punitive measures he imposed there.

“The Palestinian Authority continues to impose heavy economic sanctions on the residents of the Gaza Strip after the discovery of the two coronavirus cases,” complained Hassan Khraisheh, deputy speaker of the Palestinian parliament, known as the Palestinian Legislative Council. “This farce must end immediately. The sanctions imposed by President Abbas since 2017 have exacerbated the suffering of the people. Abbas has not even issued any order to assist the Gaza Strip. Funds and medical assistance must be provided urgently to the Gaza Strip to prevent the spread of the coronavirus.”

Another Palestinian official, Kayed al-Ghul, member of the PLO’s Popular Front for the Liberation of Palestine (PFLP), urged Abbas immediately to lift the sanctions he had imposed on the Gaza Strip. Al-Ghul warned that the Palestinians of the Gaza Strip could pay a “heavy price” for the continued power struggle between Abbas and Hamas.

These Palestinian officials are deluding themselves by believing that Abbas would heed their urgent appeals to assist the Gaza Strip or remove his sanctions against two million Palestinians. Abbas, like the rest of the Arab leaders, wants the Gaza Strip to be Israel’s problem alone.

Abbas is undoubtedly looking forward to a day when he can hold Israel fully responsible for the outbreak of the coronavirus in the Gaza Strip. He is also likely waiting for the UN and many in the international community to join him in blaming Israel and Jews for the spread of the pandemic among his people while ignoring his own responsibility for the humanitarian crisis in the Gaza Strip. As is well known, the real name of the virus causing the current crisis is “novel coronavirus” — and that is where the novelty ends in the Palestinian world, where it is incitement as usual toward Israel. 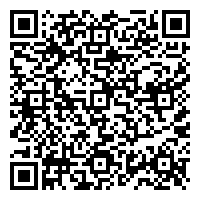