President Donald Trump’s much-anticipated “Deal of the Century” peace plan for the Israeli-Palestinian conflict has not yet been formally made public, though there have been leaks about the proposed demands on both sides. While Israeli leaders are not saying much publicly, the Palestinians have very forcefully made it known that they will have nothing to do with the agreement. They still harbor dreams of Palestine “from the river to the sea” and a singular Jerusalem as their capital. And what of the Jews? Maybe they are hoping that they will all fit into Trump Tower.

While the conflict between Arabs and Jews has been going on for over 100 years in different forms—from active war to guerilla Intifadas—well over 40 years of American negotiation has taken place with mixed results, at best. Cold peace between Israel and its neighbors, Egypt and Jordan, has made total regional war less likely but has not brought about a true thaw in relations or increased trade and tourism as hoped. The question the Palestinians might want to ask is how much they want to bet against Donald Trump. An incomplete list of those who wrote off Trump in one form or another and were later proven wrong is long and getting longer:


*He can’t beat 16 Republican competitors that include seasoned politicians, minorities and a woman candidate. He handily beat them all.

*He can’t beat The Anointed One who was guaranteed to win and received virtually every newspaper endorsement from sea to shining sea. Ohio, Wisconsin, Florida and Michigan sealed the stunning victory;

*If he is elected, the stock market will crash. While it’s had its moments, the market is up significantly since the inauguration;

*If he is elected, the economy will tank. Unemployment has never been lower, wages are up, and consumer confidence and business optimism are strong;

*If he is elected, there will be war with North Korea. President Trump is the first US leader to meet a sitting North Korean president and another summit is scheduled for next week;

*He will never get the embattled Brett Kavanaugh confirmed; Justice Kavanaugh seems to be doing just fine as the newest member of the Supreme Court.

There are more examples, but the overall pattern is clear: President Trump has kept virtually all of his electoral promises (such as moving the US embassy to Jerusalem, something his three predecessors promised and never did) and has overcome opposition from the press, the Left, Hollywood, sports stars, tech billionaires, partisan bureaucrats and the new Socialists in order to successfully reduce regulation, strengthen the military, get our allies to pull their weight, and bring “long gone” manufacturing jobs back to the US by the hundreds of thousands. The Palestinians don’t appreciate how successful Donald Trump has been in the space of only two years.

The Palestinians have always tended to fight the last war: whatever tactics worked last time they plan to use again against the Israelis, not taking into account that the Israelis in the meantime learned the painful lessons and are ready for the known challenge. The Palestinians think that they are dealing with an Obama or Kerry whom they can roll. They don’t understand that President Trump has caused the Arab world to pretty much drop the Palestinian issue and run forward to confront Iran. That was the message from Warsaw last week. While Arab leaders paid the mandatory lip service that the Israeli-Palestinian conflict is the major issue preventing peace in the Middle East, each week brings new stories of increased cooperation between Israel and its neighbors. Stories surface of representatives from states officially at war with Israel coming for meetings or Israel and unnamed states working together on counterterrorism or other issues of mutual concern. Every month or so, Bibi Netanyahu is photographed with a world leader that people would have sworn he would never have been able to meet if this was still say 1985. The Palestinians will bet against Trump, but they will have egg on their face as do the “experts” who said that Trump has no way to defeat the inevitable Hilary Clinton or the Nobel laureates in Economics who said that a Trump presidency will tank the economy. More job openings than applicants; don’t remember hearing about that under the previous resident of the White House.

The Oslo Accords created a half-baked Palestinian Authority whose existence means worldwide donations and no requirement for Palestinian “leaders” to take responsibility for building an economy, housing returning “refugees” from neighboring countries, or creating a society that will coexist with Israel. Agreeing to a Palestinian state would be the worst thing that Mahmoud Abbas could do: he would need to have either natural resources or a strong tech sector as the foundation for any future economy; he has neither. Hundreds of thousands of housing units would need to be built to house the mass of Palestinians expected to return from Lebanon, Jordan, Iraq, and elsewhere. Nowhere near the number of units required is being built. The Palestinian leadership likes the Palestinian Authority model—money from donors and no responsibility to build a successful nation.

Those in Ramallah will bet against Trump on the Deal of the Century, but they should expect to find themselves joining those who wrote off Trump and lost. Israel will make peace—officially or unofficially with its neighbors, trade and tourism will increase and the Palestinians will find themselves isolated and without friends to make their cause central. The Palestinian areas will be like bad neighborhoods to be avoided—everyone having given up hope for making them better. Look at Gaza which was supposed to become the Singapore of the Middle East. Now it’s a terror hotbed cut off not only by Israel but by the Egyptians as well. Palestinians in the West Bank will either flee or try to find work in Israel to get by. And the new members of Congress from Michigan and Minnesota will see the self-inflicted misery in the Palestinian areas and do that which comes naturally: blame Israel and President Trump for the Palestinians’ own failures. 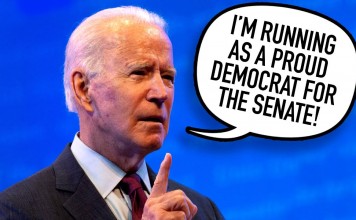 Joe Biden is Running for Senate