For the past few decades, America’s Jewish community has been on a honeymoon of sorts.

Jews have been a part of the United States since the 1776 War of Independence when approximately 2,000 Jews lived in the country. Jewish emigration to America began in the early 1800s, primarily to the South, to cities such as Charleston and Savannah, expanding in the 19th century to New York and elsewhere around the nation. The first mass emigration to the United States, however, took place during the last two decades of the 19th century and the first quarter of the 20th. Almost 3 million European Jews came to America during this period.


There was discrimination aplenty, and the future of the Jews in this country was still unknown. Then came the establishment of the Jewish State of Israel in our ancestral homeland, followed by massive and miraculous military victories for the nascent Jewish state, which propelled Jewish pride and identity around the globe. Little by little, America’s Jewish community found its place. Some of it was the result of changes to the law, and some the result of the change to the sociological landscape. In a way, we’ve always been a part of the fabric of American life.

Unfortunately, we’ve also allowed this era to soften us as a people. We let our collective guard down. We began intellectualizing away our identity in an ill-fated attempt to fit in.

From the comfort of our American-style homes, we spent the last few decades losing our connection to our roots, our Jewish history, our peoplehood, our religion, our land and our identity. Many have simply forgotten who we are. But for what it’s worth, you can always count on the anti-Semites to remind those of us who need to be reminded. While the anti-Semites say this with disdain, I say it with pride: No matter how successful, how connected, how Americanized you think you are, you are always a Jew.

This past decade, we’ve all seen anti-Semitism appear in places that we never expected. On college campuses, in houses of worship, state legislatures, city councils, Congress, at right-wing rallies, left-wing rallies, anti-Israel rallies, in Arab communities, black communities and white communities—anti-Semitism is back. (While many argue that it never went away, the numbers simply do not support that statement.)

Trying to understand the logic of the anti-Semites is a dizzying endeavor, and frankly, a useless one—but one thing is absolutely clear for Diaspora Jewry: The honeymoon is over.

We must recognize that we can no longer afford to be complacent. We cannot afford internal divisions within the Jewish community. We must unite, not just in word but in deed. Political differences must fall by the wayside. The fact that you believe in a more robust government, full of government-subsidized programs, while I believe in a small government which taxes people as little as possible while creating incentives for people to work harder, does not matter at all when people are shooting at us in synagogue, both literally and figuratively.

We must unite to fight our enemies.

We must fight against the calls to hide by removing our identifying features as Jews, such as our kipahs.

We must, of course, fight to protect ourselves and our communities from harm.

We must continue to teach our children about our roots, our religion, our story, our history, our future, our land of Israel, our State of Israel, and how to stand up for themselves both physically and intellectually. Even those of us who as of yet feel no discomfort must do so because history teaches us that times change and that when we become complacent, we become vulnerable.

We must also remember that one of the reasons the Jewish people have survived and thrived despite generation after generation of anti-Semitism, libels, expulsions, pogroms and even the Holocaust, is that at the end of the day, we unite, we go back to our roots, our religion, our traditions and our brotherhood, and together, we persevere. However, this response does not happen on its own. It requires commitment and a true paradigm shift in the Jewish community. We’ve done it before. We can and will do it again.

As Natan Sharansky said, “There is no power in the world that can stand against us when we feel a part of our history, part of our people and part of this historical struggle.” 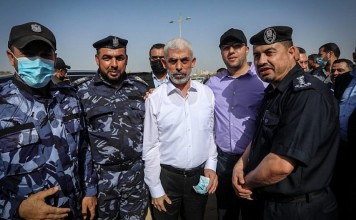