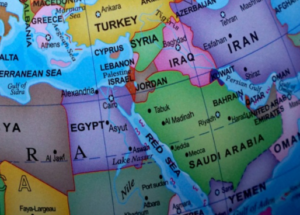 The recent deadly and destructive explosion in Beirut raised more questions than answered, and even the “answers” that the international community arrived at obscured in some ways the underlying issues that made this tragedy possible. Several talking points floated to the surface and continue to hold sway.


These revelations tell only part of the story, however.

According to one of the inspectors, the ammonium nitrate stored at the warehouse in Beirut was identical to the substance seized by Greece from a Turkish shipment en route to Misurata Port in Libya on June 10, 2020, where it was intended, presumably, to end up in the hands of Government of National Accord (GNA)-affiliated militias and Turkey-backed mercenaries. If accurate, this lends credence to the increasing rumors of Iran’s cooperation with Turkey on a variety of matters, including not only Turkey’s “defense line”in Libya but also, as evidence increasingly shows, its overall geopolitical strategy. It has yet to be determined whether Turkey’s acquisition is recent or this level of defense cooperation dates back to 2013, when Iran and Turkey were working together on sanctions-busting schemes.

However, it does highlight another sorely overlooked issue: the extent of Turkey’s investment and involvement in Yemen. The most recent development on that front is a reported delivery of arms allegedly shipped by Turkey through Syria to Lebanon. Turkey has been supportive of Lebanon’s Muslim Brotherhood branch, and, as with its activities in Somalia and Yemen, it has been at the forefront of humanitarian and ideological outreach.

Turkey’s involvement in Tripoli, Lebanon (the focal point of Islamist activity in the country) goes back years. Since 2012, Ankara has been engaging in efforts to boost tourism with Lebanon via a direct ferry that bypasses Syria. Lebanon fits within Erdoğan’s ideological “defense line” in that it was once part of the Ottoman Empire, and thus comports with his agenda of restoring the neo-Ottoman Empire while appeasing both his nationalist and Islamist bases.

With that said, the reality behind the lofty rhetoric is quite pragmatic. Erdoğan’s genuine intention, far from appeasing nationalist or Islamist sentiments, is to achieve the practical domination of the Mediterranean and the Middle East by way of maritime and naval strategy and gain access or take outright control of the most important strategic trade routes and passages.

Until recently, Lebanon’s significant Armenian community has been a challenge for Turkey’s development of binding strategic ties with Beirut. A significant portion of Lebanese Armenians have aligned themselves with Hezbollah; Armenia the state, despite its staunch opposition to Erdoğan, has close defense and growing energy relations with Iran. Therein lies one of Turkey’s opportunities to make a breakthrough, given that Turkey and Iran have increasingly coordinated the activities and agendas of their various proxies and geopolitical moves.

On a more pedestrian level, there is a mercantile opportunity there for trade, given Lebanon’s dire economic situation, Turkey’s desperate search for new markets as the lira keeps hitting new lows, and its willingness to send affordable goods to Lebanon as part of a mutually beneficial influence campaign. Lebanon could also balance out the stand-off in the Eastern Mediterranean should the government find it beneficial to side with Ankara. Turkey is thus taking advantage of the most recent crisis to portray itself as a white knight. It is offering copious amounts of aid, but its interest is more in the government than in the people.

Meanwhile, Turkey is working on consolidating its power across the board. An alliance with Lebanon would be another stepping stone for Ankara’s control of the Eastern Mediterranean. Just as importantly, Turkey’s aggressive maneuvers in the area immediately following the Beirut explosion and its overall strategy of provocation in the region may be, at least in part, a diversion from its more immediate concerns elsewhere.

Turkey’s unwelcome meddling prompted a series of diplomatic reactions. Greece and Egypt announced an EEZ zone that effectively underscores their shared border, challenging Turkish and Libyan ambitions for exploring gas in the area and their joint maritime agreement. Italy has announced its intention to join the Israel-Greece-Cyprus Eastern Mediterranean project. Israel and Cyprus are boosting their cooperation on military fronts and are increasingly integrating with Egypt to block Turkey’s nationalist naval “Blue Homeland Doctrine”, which is intended to create Turkish dominance of the Eastern Mediterranean and the Black Sea.

But Turkey’s brazen territorial grab, which has created massive opposition and united Egypt, France, Greece, and a number of others, seems inconsistent with Ankara’s cautious and consistent under-the-radar outreach strategy, which has proven successful in Somalia and is now increasingly so in Pakistan, Indonesia, and even Afghanistan and among the Indian Muslim community. That may be the point.

While Turkey certainly has interests and objectives in the Eastern Mediterranean, by creating a chaotic reactionary scramble among its adversaries, it is able to make more headway in Yemen, which links it to Somalia and Libya through both routes and manpower and gives it a clean passageway to the strategically important Red Sea. Some of the stakeholders, including Somalia and Ethiopia, are already under Ankara’s influence. Egypt is the dominant power in the Red Sea, and Turkey may be scheming for a way to split the recent Saudi-led security alliance of coastline nations.

Turkey’s aim may be to surround and weaken Egypt on three fronts: by entangling it in a war of attrition in Libya, engaging it in a low-grade conflict with Ethiopia over GERD-related humanitarian concerns (Ethiopia is being armed with French jets and other advanced weaponry thanks to Turkey’s ally Qatar), and on the naval front, undercutting its cooperation with Somalia and Ethiopia, which would open Egypt up to threats of piracy, incursions, small-scale but distracting maritime conflicts over fishing and other such rights, contraband, and even terrorism. This would split Egypt’s forces, which are facing ongoing threats from ISIS in Sinai, on multiple fronts, rendering each grouping ineffective. That scenario would give Turkey the possibility of asserting significant influence if not total control in North Africa and crippling Cairo’s security to the extent that cooperation with other countries in the Eastern Mediterranean and elsewhere would become an unaffordable luxury.