I met Dr. Luchins in the summer of 1999 when I took time off from active duty as a U.S. Naval Officer to attend the Aish Hatorah yeshiva in Jerusalem’s Old City. Dr. Luchins was a lecturer at the yeshiva that summer. His boss and mentor for over two decades, Senator Daniel Patrick Moynihan, created the Jerusalem Fellowships at Aish Hatorah, and Dr. Luchins was a proud participant in it.

Which is why Dr. Luchins’ article last week in support of Joe Biden’s candidacy (“The Jewish Case for Joe Biden”) is so perplexing. I will return to this topic shortly, but first: In his article, Dr. Luchins cavalierly lumps the far right and far left together, conveniently ignoring the glaring differences between them. Congress doesn’t contain a single Republican who hates Jews or Israel. It does boast several Democrats, though, who openly support the Boycott, Divestment, and Sanction (BDS) movement.


Several of them – including Alexandria Ocasio-Cortez – were given speaking roles at the Democratic National Convention. When Israel banned Rashida Tlaib and Ilhan Omar from entering the country due to their support of BDS, Democratic leaders condemned Israel.

Bernie Sanders, who almost became the Democratic Party nominee for president, is an incessant Israel critic and has called for cutting U.S. aid to it. He also contemptuously refused to speak at AIPAC, the premier bipartisan organization promoting the U.S.-Israel relationship. Has Biden distanced himself from these individuals? No, he’s embraced them, welcoming them into the party’s “big tent” of ideas.

Meanwhile, the Democratic Party champions Marxist groups like Black Lives Matter (BLM), whose manifesto condemns Zionism and calls Israel an “apartheid” regime. The left is also the source of virtually 100 percent of the anti-Israel activity on American campuses today. Biden has never condemned BLM by name and has not confronted the menace of Jew hatred within academia.

Biden’s silence on the violence and chaos in America these past months has also been atrocious. For months he sat mum as leftist anarchists burned and looted America’s cities, tore down historical monuments, defaced houses of worship in Los Angeles and Washington, DC, and violently attacked innocent Americans on the streets.

Only when Biden saw the severe political damage to his candidacy resulting from his silence – reflected in eroding poll numbers – did his handlers implore him to speak up. Dr. Luchins claims Biden “stood up” to extreme voices in his party and “strongly” condemned the months of vicious rioting and looting of America’s cities. Biden’s recent transformation on this issue – because of falling poll numbers – hardly amounts to the type of forceful condemnation that Luchins attributes to him.

Neither vouchers nor tax credits nor tax deductions for private schooling is supported by Biden or his party. Democratic Party officials opposed the recent Supreme Court decision (Espinoza v. Montana Department of Revenue), which ruled that religious schools cannot be discriminated against when a state funds private educational endeavors. There is also a growing perception that today’s Democratic Party is hostile to organized religion, most glaringly as it pertains to moral and family issues.

Dr. Luchins also makes a feeble attempt to defend Biden’s record as it pertains to Israel, and it is this attempt that deserves the strongest rebuttal. In their waning, lame duck days in office – in December 2016 – the Obama administration, of which Biden was an integral part, orchestrated the passage of arguably the most odious resolution against Israel in the history of the United Nations.

That resolution – UNSC 2334 – which passed a mere three weeks before Obama and Biden left office, referred to all lands obtained by Israel in 1967 as “Palestinian,” and stated that any Jewish settlement “in the Palestinian territory occupied since 1967, including East Jerusalem, has no legal validity.”

Dr. Luchins conspicuously avoids mentioning this bigoted resolution, merely claiming that Obama made “some painful mistakes” regarding Israel, but assuring us that Biden was the “strongest pro-Israel voice” within the administration. Biden, though, has never repudiated this monstrous resolution.

Prior to 1967, Jews had no access to the Western Wall; the Mount of Olives cemetery, where my brother-in-law is buried; Kever Rachel; and the Me’arat Hamachpelah. The Jewish Quarter of the Old City had no Jewish presence.

Israel rectified these crimes. After the Six-Day War, the Jewish people returned to these holy places and areas and rededicated them after years of desecration and destruction. UNSC 2334 condemns them for doing so. The rebuilt Jewish Quarter is deemed illegal by this resolution; the Aish Hatorah yeshiva, which affords thousands of Jews a glorious place to learn our history, is considered a violation of international humanitarian law; the Jerusalem neighborhoods built by the Rabin/Peres governments are deemed war crimes; and the rededication of our holy places have no validity.

This monstrous resolution, as bigoted at the infamous UN General Assembly “Zionism is Racism” resolution, was only able to pass due to the acquiescence of a hostile Obama/Biden administration. Ironically, it was Senator Moynihan, Luchins’ boss, who so strongly fought the UN’s assault on Israel and Jewish history when he served as U.S. Ambassador to the UN.

When President Trump entered office, he immediately removed the stench of this odious resolution, recognizing Jerusalem as Israel’s capitol and moving the U.S. embassy there. U.S. Ambassador to Israel, David Friedman – a neighbor of mine in the Five Towns – proudly lit the Chanukah menorah at the Western Wall this past year, led the Priestly blessing at the Kotel on Pesach, and ceremoniously opened the Pilgrims Road of the City of David, on which Jewish pilgrims walked thousands of years ago en route to the Temple Mount.

Would a President Biden allow his ambassador to conduct himself in such a manner? Would a Biden administration afford Israel and Jewish history even anything close to the same level of respect?

President Trump followed his Jerusalem recognition by recognizing Israeli sovereignty on the Golan Heights, an area once used as a launching point to massacre Jews in the Galilee. Biden has remained silent on this issue.

Trump has also presided over the historic signing of peace treaties between Israel and the Arab nations of Bahrain and the United Arab Emirates. It seems inevitable that other Arab nations will follow in their footsteps, including Saudi Arabia and Morocco. None of this occurred on Obama/Biden’s watch.

Trump also forcefully confronted the disastrous Iran deal, understanding that the Obama/Biden/Kerry plan simply paved the way for a nuclear Iran, while flushing the regime with billions of dollars, which likely funds terrorist machinations around the globe. But Biden supports the Iran deal, even though Israel has since uncovered secret files containing Iran’s nuclear weapons.

The record is abundant and deeply troubling. Joe Biden is out of touch with the reality of the Middle East and with Israel in particular. His positions have already caused long-term damage to the U.S.-Israel alliance. Former Secretary of Defense Robert Gates, who served under Obama, recently claimed that Biden has been on the wrong side of virtually every foreign policy issue for decades.

Dr. Luchins is an astute political operative who understands quite well the reality I’ve outlined above. He and large swaths of American Jewry need to take a long look in the mirror and ask themselves on which side of history they want to be counted. 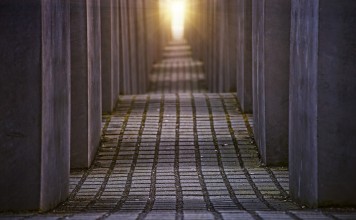