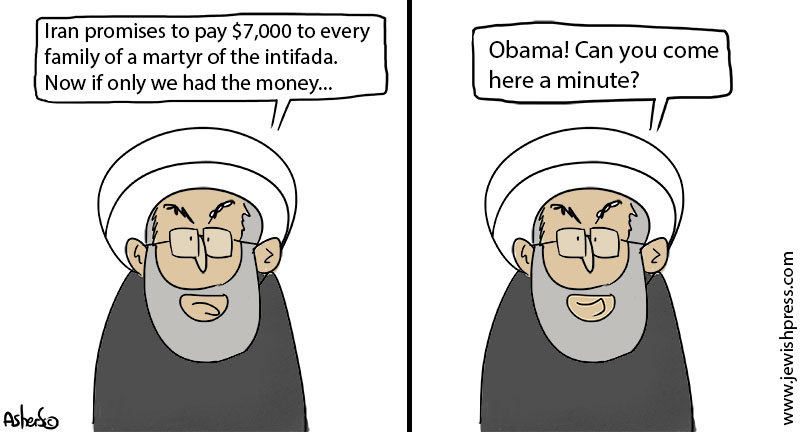 President Hassan Rouhani celebrated media claims of Biden’s victory as “an opportunity for the next US government to make up for past mistakes.” “The next American administration will surrender to the Iranian nation,” the Iranian leader boasted after the election.

The Islamic terrorist state has every reason to want Biden in the White House. The full scope of Iran’s interference in our presidential election still remains unknown, but one dirty trick involved sending threatening emails to Florida and Arizona voters from “Trump supporters”. A video showed Iranian hackers supposedly sending in illegitimate absentee ballots using stolen voter data, and the Director of National Intelligence warned that Iran had accessed voter data.

“Iran has no interest in interfering in the U.S. election and no preference for the outcome,” Iran’s spokesman at the UN claimed.

But Iran’s preference for Biden is an even worse kept secret than its nuclear program. The Iran Lobby had been investing in Biden before anyone outside D.C. or Delaware knew him.

Forty years ago during the Iran Hostage Crisis, Biden had been against rescuing the American hostages, putting him even further on the appeasement side than the Carter administration.

After September 11, Biden even suggested, “this would be a good time to send, no strings attached, a check for $200 million to Iran.”

In a speech to the American Iranian Council that same year, Biden argued that, “We cannot simply dismiss Iran’s security concerns” and urged that American gestures to the Islamic terror state should “not rest on the principle of reciprocity” because Iran wouldn’t respond to them.

He also urged that Iran be allowed to join the World Trade Organization, receive refugee aid, and maintain relations through the AIC and George Soros’ Open Society Institute.

At a 2003 Senate hearing, Biden suggested that Iran was pursuing nuclear weapons because it felt “isolated”, and that its pursuit of weapons of mass destruction had nothing to do with Islam.

During the 2008 election, Biden wanted to reopen a US diplomatic presence in Tehran.

Behind the scenes, Biden had tapped into the Iran Lobby’s fundraising apparatus, raising tens of thousands, which, by the 2020 election had turned into hundreds of thousands of dollars.

Right before the election, Biden released his list of fundraising bundlers. In an exclusive story, Front Page Magazine’s investigation revealed that they included Jamal Abdi, the executive director of NIAC Action. The National Iranian American Council (NIAC), often described as the Iran Lobby, claimed its members had run phone banks and donated $385,000 to Biden.

NIAC Action had endorsed Biden and declared, “our long, national nightmare is almost over. AP has called the race for Joe Biden”. If the Iran Lobby gets its man into the White House, the region will once again fall apart into the brutal war zone that it was under Obama.

The Trump era has seen the signing of multiple peace accords between Israel and Sunni Arab nations. These accords represented a new and unprecedented alliance against Iran and its Islamist allies, both Shiite and Sunni. The latter include Al Qaeda, whose number two was recently assassinated by Israel, acting on intelligence from the United States, in Tehran.

Despite media claims that the Trump administration was dangerous and irresponsible, it pursued a classical foreign policy that minimized our military intervention by bringing together allies who shared common strategic goals to stabilize the region while letting them do the heavy lifting. Israel’s assassination of Al Qaeda’s likely next chief was an example of that. As are the growing commercial and military ties between Israel and some Arab countries that have key things in common: they’re small, vulnerable, and face a likely conflict with Iran and Islamists.

The Trump plan was a mirror image of the Obama plan to withdraw from the region by creating a regional alliance between Iran and Islamists to atone for generations of American foreign policy while hanging Israel out to dry. The Cairo strategy, after toppling multiple Arab governments, turned the region into a bloody war zone and finally collapsed in Syria.

While President Trump had often been attacked for having no plan in Syria, his plan was very clear. He imposed sanctions on Iran, cutting off the cash flow that had been financing its war machine, and made it clear to the Arab governments that America would not intervene. Syria is still a bloody mess, but it lacked the disastrous momentum that Obama provided by supplying the Shiites with money and the Sunnis with weapons while issuing meaningless warnings.

Biden would inevitably jumpstart that bloody civil war. The only question is whether he would do it by just opening up Iran’s banking system while dismantling sanctions, or whether he would also appease Arab countries by supplying Sunni Jihadists with weapons for the full apocalypse. That choice would also determine how much of Joe Biden is actually owned by the Iran Lobby.

Unlike Obama, who was closest to the Muslim Brotherhood, Biden is much closer to Iran.

There is little doubt that Biden would fulfill his old proposal from after September 11. One of his first coronavirus proposals had nothing to do with America, instead it urged the Trump administration to “streamline channels for banking” to the Islamic state and its terrorist forces.

A Biden administration, if allowed to take office, would quickly rush out to convene a sham conference with Iran, in which once again fake metrics would be traded for an end to sanctions. The cash would start to flow again and so would the terror. The Iranian regime would invest its newfound wealth into the Houthis in Yemen, into Hezbollah in Lebanon, and Hamas in Israel.

Along with the IRGC’s worldwide hub of operations which stretch into Africa and Latin America, encompassing drug trafficking into America, and aid to Marxist terrorists in Latin America.

But it’s no coincidence that the peace treaties between Israel and Arab countries were being put into place toward the election. This was not, as some media cynics insisted, an election strategy, but a preparation for four years of American greatness or four years of treason.

The Trump administration’s foreign policy was meant to survive even a renewed Iran.

Putting a Sunni-Israeli alliance into place would limit the need for American intervention if President Trump were in office and, even more importantly, if he were no longer in office. The real test of that alliance will come if Iran renews its closeness to a Democrat administration.

Obama’s old foreign policy operatives have made it clear that they want to turn back the clock. They will try to break up the new alliance between Israel and the Sunni states by offering to back a new campaign in Syria, but the one thing they demonstrated last time around is that the Muslim Brotherhood is at least as dangerous to the Arabs as it is to Israel. Perhaps, more so.

They will also double down on a new effort to force Israel to make concessions to the terrorists while trying to erode President Trump’s efforts to move beyond the “Palestinian” model.

But as long as Iran poses an existential threat to the Arab world, few in the region will care.

Obama signed off on Iran’s nuclear program and the terrorist state is closer than ever to the bomb. If Biden takes office, it is quite possible that Iran will carry out its first nuclear test.

That is why the Iran Lobby invested so much time and energy into backing Biden.

The Obama administration did everything possible to protect Iran’s nuclear program, even long before its nuclear sellout, spying on Israel’s military plans and leaking them to the media, spying on Prime Minister Netanyahu, and even on members of Congress. Biden would do the same.

Forty years ago, Joe Biden opposed military action to rescue American hostages. After four decades of being in bed with the Mullahs, they’re counting on him to help them get the bomb.

Meanwhile the Trump administration is racing against the clock so that no matter what happens in December and January, Biden’s friends in Tehran will run into a region of roadblocks.