The approach of the Islamist regime of Iran toward Israel is not based on the materialist cost-benefit analysis common in politics in the West and most of the rest of the world. Rather, it is an apocalyptic attitude rooted in a veiled (and sometimes not so veiled) form of postmodern antisemitism that can be neatly defined as a jihad on Jews. This contemporary kind of antisemitism is conducted by a global conglomerate of Islamists and leftists who target Israel as the ancestral home of the Jewish people. BDS is the most flagrant manifestation of this marriage of convenience, but the anti-Israel bond shared by Islamists and leftists has deep roots and goes much farther back.


In the heat of 1960s Nasserite Israelophobia, many sympathetic Iranian Islamists and leftists embarked on an epic journey to the Levant, specifically to Syria and Lebanon, to fight Israel on the one hand and press the fortunes of the Shiite population on the other. When King Hussein of Jordan expelled Yasser Arafat and his Palestine Liberation Organization (PLO) for attempting to overthrow the Hashemite monarchy, the terror group moved its headquarters to Beirut through the mediation of other Arab leaders. There, the radical Iranian Islamists and leftists who longed to obliterate Israel (for different reasons) allied themselves with Arafat and engaged in a fight with pro-Western and pro-Israel Maronite Christians. This led to the devastating Lebanese Civil War (1975-1990), so far the longest-running civil war in the contemporary history of the Middle East.

The Lebanese Civil War turned out to be one of the key factors that brought the Islamists to power in Iran. Participation in that war battle-hardened Islamist and leftist fighters who would exploit their newly acquired strategic and military skills to overthrow the Western-backed regime of the Shah. During and immediately after the 1979 Revolution in Iran, these returnees would form the so-called “left wing” of the fledgling Islamic Republic. Better known as the “Line of Imam” due to their closeness to Khomeini, they were a relentlessly anti-Israel and anti-Western faction keen on the “export of revolution” beyond Iran’s borders at any cost.

To that end, no sooner had they overthrown the Pahlavi regime than they brought Arafat to Iran and had Khomeini pledge unconditional support to his cause. A little later, in the early 1980s, they would create Hezbollah in Lebanon with the help of the Islamic Revolutionary Guards Corps (IRGC). The notorious Iran-Contra Affair, during which senior US officials sold arms to Iran and used the proceeds to finance the Nicaraguan Contras, was exposed by the leftist faction as an indicator that the Iranian system had sold out to the US and Israel. At that point, Khomeini cracked down to prevent fissures from opening in the regime’s ranks. The fortunes of the Line of Imam gradually declined from that point until they were completely eclipsed by the Khamenei faction after Khomeini’s death in 1988.

Over time, the Islamist regime’s mostly ideological antipathy toward Israel developed into a grand political strategy for empire-building in the Middle East and beyond. Following the long-held aspirations of the “revival of the Dar al-Islam (House of Islam)” and “leadership of the Islamic World” that started with Khomeini and continued more systemically under Khamenei, the Islamic Republic exploits Israelophobia as a strategic lever to advance its goals among Muslim-majority nations in the region and the political Left in the West.

Despite their differences, both Shiite and Sunni fanatics are united in their hatred of Israel, which puts them in the same boat as far as the Western Left is concerned. The artful Islamist regime exploits this point of convergence between Muslim zealots and the Left to advance its project of ideological and territorial expansionism in the Middle East as well as to consolidate its presence in the West. To all that can be added the regime’s ongoing attempts to throw a wrench into the Arab-Israeli peace process, especially through support of sectarianism, terrorism, and war.

The Islamist regime does not consider its oft-repeated phrase “Israel must be wiped off the face of the earth” a mere slogan. It has acted upon it as a point of principle and continues to do so. In 2006, the regime had Hezbollah unleash a deadly and destructive barrage of over 4,000 missiles on Israel over the span of one month, causing serious damage to cities in northern Israel and killing 165 Israeli military personnel and citizens. Over the past decade, the regime has taken advantage of the Syrian Civil War to station its forces adjacent to the Israeli border, where they constantly encroach upon the small country’s territory and threaten it with drones, missiles, and mortars. Recently, the regime has been trying to target Israeli civilians through sophisticated cyberattacks. In April of this year, Iranian hackers mounted a cyberattack on the Israeli water management system to raise the chlorine content in the nationwide water supply with the object of causing a mass poisoning of Israeli citizens. Most recently, on the occasion of Quds Day, the Supreme Leader, while passionately inciting all Muslims to mount a jihad on Israel, used the Nazi phrase “Final Solution” to describe what he believes should be the fate of the Jewish State.

The Islamist regime in Iran, for both deep-rooted ideological reasons and grand-scale strategic purposes, obsessively and single-mindedly pursues the negation and, if possible, complete annihilation of Israel. That is why the regime, even as it suffers under the Trump administration’s “maximum pressure” campaign, will not change its behavior. Erasing Israel is essential to its nature.

Any attempt at “normalizing” the Islamist regime in the liberal world order without taking into account its inherent antipathy toward Israel, so far the only liberal democracy in the Middle East, will leave the Jewish State facing an existential threat. In recent years, Israel’s tactical War Between the Wars has considerably restrained the scope and intensity of the Islamist regime’s jihad on Jews. But if it is to be stemmed once and for all, the West must construct a consistent and robust strategy toward replacing the Islamist regime in Iran with a liberal democracy. That grand strategy has yet to emerge.

(Dr. Reza Parchizadeh is a political theorist, historian, and senior analyst. He can be reached at https://twitter.com/rezaparchizadeh and https://iup.academia.edu/RezaParchizadeh) 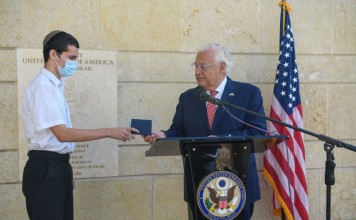