In September, U.S President Donald Trump and Israeli Prime Minister Benjamin Netanyahu promoted the idea of a Mutual Defense Treaty between their countries with Netanyahu branding such a pact as being “historic” should it be achieved.

The idea is now back in the headlines in Israel. Energy Minister and security cabinet minister Yuval Steinitz stated in recent days that the signing a defense pact is one the reasons why Netanyahu wants to remain as prime minister for the next six months.

However, the defense pact has been met with criticism from some in Israel, who argue that it could limit Israel’s freedom to maneuver and constrain the Israel Defense Forces. One of the concerns among those who have raised objections is that the pact might force Israel to consult with the United States before taking sensitive, proactive high-risk military action, subjecting Jerusalem to a potential American veto.

Opposition leader and Blue and White Party leader Benny Gantz, a former IDF chief of staff, tweeted on Dec. 2 that he would not “support an international agreement that would limit the actions of the State of Israel and the ability of the IDF to defend against the threats it faces.”

Addressing these concerns, Steinitz said that a defense pact with the United States would not tie the hands of Israel any more than Britain has been constrained by its membership in NATO.

In July, a working group run by the Jewish Institute for National Security of America (JINSA), under the leadership of former NATO Supreme Allied Commander Adm. (ret.) James Stavridis, issued a report making the strategic case for a U.S.-Israel mutual defense pact. JINSA drafted the text of a treaty that is similar to, but more narrowly defined than, existing U.S. arrangements with 50 countries, becoming the only organization to put out such a draft to date.

Since then, the organization said in recent a statement that various objections to a pact have been raised, “and we believe it now constructive to advance the policy conversation by elaborating the most salient counterarguments.” To that end, JINSA released a follow-up report addressing the main points of concern. 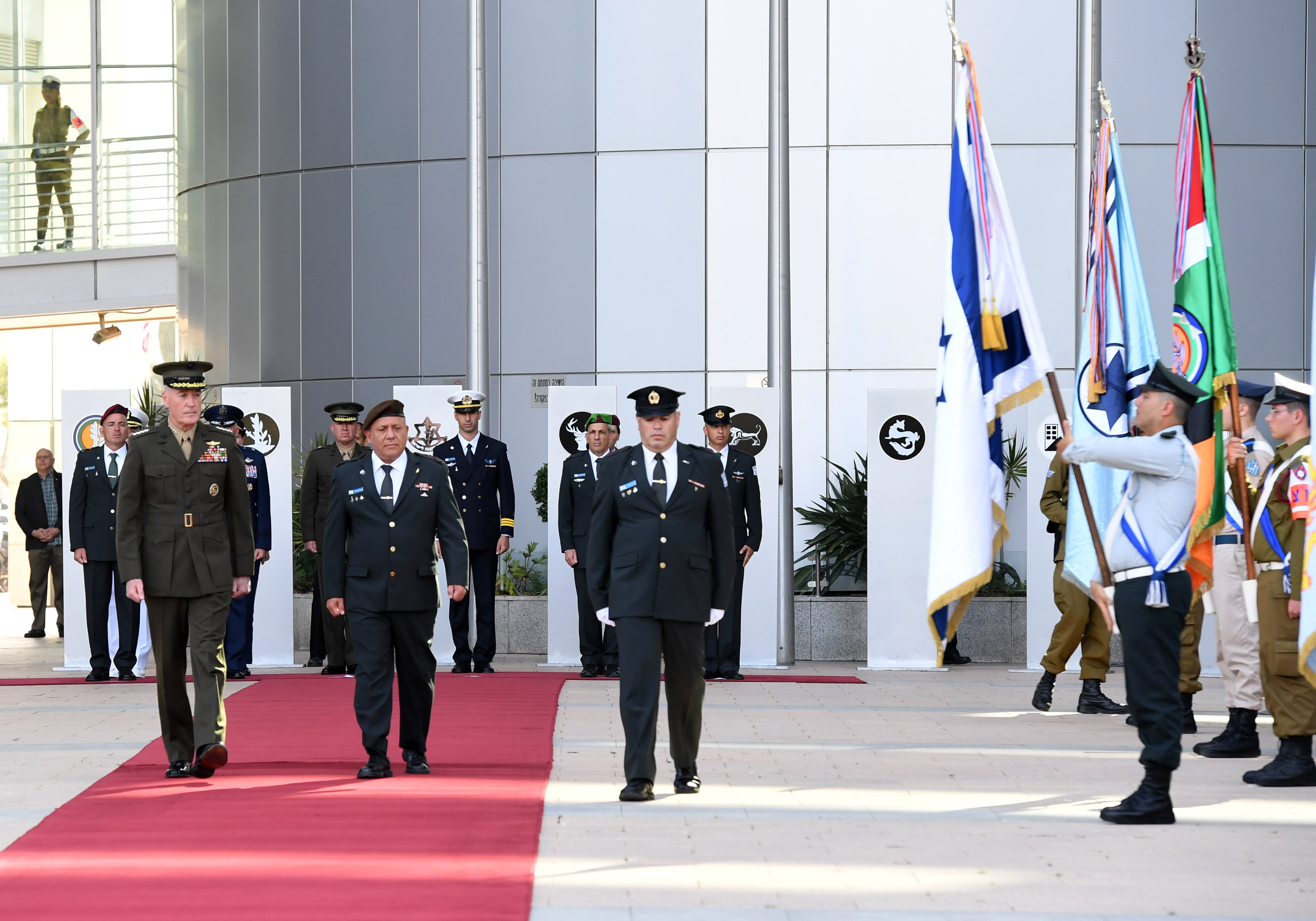 Former Chairman of the Joint Chiefs of Staff, General Joseph Dunford, was received by a full honor guard of IDF soldiers at the Israeli Defense Forces headquarters in Tel Aviv, May 9, 2017. Photo by Matty Stern/USA Embassy of Tel Aviv.

In its new report, JINSA addressed six areas of criticism, beginning with freedom of action. It stated that “mutual defense pacts do not give allies a direct say in each other’s strategic decisions, nor do they obligate the parties to support or become involved in the others’ military activities.” The section on freedom of action added that the U.S.-Israel relationship “already features greater responsibilities than those officially contained in or required by a treaty alliance, without the extra deterrence provided by an explicit security guarantee.”

“We released that report because there’s been skepticism of the idea, even among many in Israel and some here in the United States who are pro-Israel. So we thought it was valuable to at least address some of the skepticism and objections head on,” Michael Makovsky, president and CEO of JINSA, told JNS.

“This is an issue we’ve been pushing—first quietly, then publicly—starting in the summer, when we released our own paper and draft treaty,” he added. “I would encourage anybody, if they have concerns, to at least read our draft first. If they have other suggestions of what a draft should look like, they should put forward those edits. But right now, that’s the draft that Senator Lindsey Graham [R-S.C.] is championing. The Israeli prime minister seems very supportive.”

Makovsky acknowledged concerns among some in Israel over potential restrictions to Israeli freedom of action, saying, “Obviously, we wouldn’t any such treaty either that constrained Israeli freedom of action. But we don’t think it should. The U.S. has mutual defense treaties with 50 other countries, and it hasn’t stopped the U.S. or these other countries from various military action.”

Any significant Israeli military action in the Middle East would likely be preceded by Israeli consultations with the United States in any case, and a mutual defense pact could add a level of deterrence for Israel, he argued.

“If a war breaks out, it could also mitigate the intensity and scope of the conflict,” said Makovsky. “I would say that since we put out our report in July, the Iranian threat has become more serious. What’s going on internally in Iran is encouraging, but one never knows how that’s going to play out, and it could even lead the regime to conduct more provocative action. The situation is more serious regarding Iran.”

Referring to the Sept. 14 Iranian drone and cruise-missile strike on Saudi energy sites, Makovsky noted that “provocations in the region have only intensified.”

“I think Israel is more exposed, and therefore, the importance of having a mutual defense pact has grown,” he said. “But I would add that it’s not the only thing that needs to be done. We put out another report recently, detailing the the need and options for accelerating the delivery of weapons to Israel under the 10-year Memorandum of Understanding [MOU]. It’s in Israel’s DNA to rely only on itself. So it’s incumbent on U.S. also give Israel the tools it needs to continue its countering of Iranian aggression, and ultimately, also to prepare for major war against Iran Hezbollah, if it comes about.”

Makovsky said that in terms of timing, “on the Israeli side, I think it’s unfortunate that it’s gotten caught up in the elections. Certainly, Prime Minister Netanyahu’s interest has nothing to do with elections. The Israelis were interested before this long before the elections. We raised this idea first a year-and-a-half ago.”

He continued: “On the U.S. side, I think it’s a good time to engage the issue. No one knows how the presidential elections are going to turn out in a year, but at least for now, it looks like President Trump has shown interest. It’s important to seize that opportunity as much as possible. For us, the impetus is purely to contribute to regional stability.”

In its follow-up report, JINSA said that Iran’s growing regional aggression, including providing more than 130,000 rockets and missiles to Hezbollah in Lebanon, and its now-revived nuclear program create the potential for higher-level conflict that Israel alone “might struggle to deter or defeat.”

“By treating a major attack on one as an attack on both, a mutual defense pact would provide greater deterrence than either ally could provide alone. This could prevent Iran or others from initiating or escalating to large-scale action against Israel or U.S. vital interests in the Middle East—and others from joining in—or mitigate or curb the scope of enemy action.”

The report noted that officials and other experts in both Washington and Jerusalem have questioned whether the “mutual” aspect of a mutual defense pact “might oblige Israel to assist U.S. military operations far afield.” It added that “our proposal pertains only to a limited set of exceptional armed attacks on either or both parties, and only in the Middle East.”

‘A partisan political football in the 2020 race’

Ilan Berman, senior vice president of the American Foreign Policy Council in Washington, and an expert on regional security in the Middle East, Central Asia and the Russian Federation, told JNS that caution needs to be the “order of the day” when it comes to examining such a pact.

“That the issue is gaining currency in Washington and Tel Aviv shouldn’t be all that surprising,” he said. “There are compelling reasons for both sides to want a formal arrangement, especially as the regional situation worsens and the potential of conflict with Iran grows.”

At the same time, he added, the strength of the U.S.-Israeli relationship has always rested on a broad bipartisan foundation. Having the Trump administration advance the treaty, especially during an election cycle, “inevitably threatens to make the issue a partisan political football in the 2020 race. That’s something that Israel, on balance, shouldn’t be eager to see.”

The same holds true on the Israeli side, said Berman. “Given Netanyahu’s current, complicated political status, any such deal would inevitably be seen as an attempt to improve his domestic situation. And it’s likely to garner more resistance in Israel at present than it would if it were put forward at another time.”

Any defense pact that formally codifies the concept of a “qualitative military edge [QME]” is going to have a hard time passing muster on Capitol Hill, cautioned Berman. “This is not because the U.S. isn’t committed to QME. It most certainly is. Rather, it is because the erosion of QME is a longstanding problem made worse by U.S. sales of advanced weapons to various Arab states over the past couple of decades. Quite simply, members of Congress aren’t going to be eager to sign on to anything that fundamentally alters the way the U.S. does business in the region. This is all the more true if Arab states who are major arms recipients [like Saudi Arabia] object.”

While these factors do not mean that a deal can’t benefit both countries, the “devil is in the details,” stressed Berman. “For it to be workable, the pact needs to be narrow enough that it doesn’t impinge upon the freedom of action of either country, and robust enough that it can serve as a credible deterrent against threats like Iran. That’s going to be an exceedingly difficult needle to thread.” 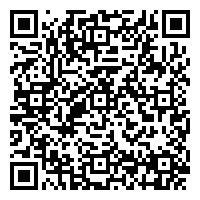