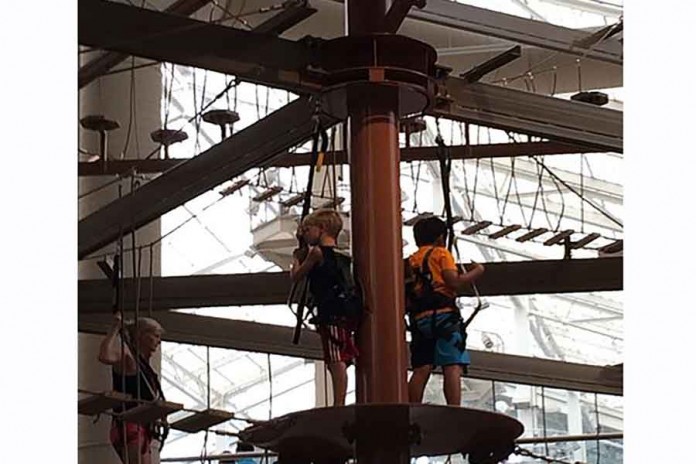 A number of years ago while vacationing in Myrtle Beach, my wife and I took our children to a rope course. If you’re unfamiliar with rope courses, here’s a brief explanation:

You’re basically connected with a harness and rope to a steel beam above the course, which consists of several thin bridges that can be anywhere from 10 to 20 feet off the ground. One bridge may be made out of steel, another out of thin rope, and yet another out of wobbly wooden slats strung together.


For starters, I’m not very comfortable with heights, so the thought of walking across a thin bridge 10 feet off the ground wasn’t very attractive to me. I also doubted the rope connecting my harness to the beam above was strong enough to hold my weight if I fell. I even wondered if the bridges could hold my weight.

I stood there with my kids looking up at the rope course coming up with one excuse after another for not going on it. I said my stomach wasn’t up to the challenge. In truth, it wasn’t. I was having severe anxiety just thinking about climbing the ramp to the first landing.

But my kids really wanted to try it. Then I saw a sign: “All children must be accompanied by an adult” and thought to myself, “Great, Mommy loves this stuff. She’ll take them.” Then I saw another sign, “No pregnant woman allowed on the course.” Well, that left me as the only option.

Deep down, I was hoping they would tell me I was too heavy and then I’d gracefully be disqualified. I was pretty sure I was the first 245 lb. man to try this. Who says it’s even safe for me? That thought lasted about 10 seconds. As luck would have it, the guy running the attraction was a good 50 lb. heavier than me. When I questioned him about the strength of the ropes, he sat in his harness and lifted his feet up. The rope held him fine. So that excuse disappeared quicker than I had expected.

But I still doubted the rope’s strength. I was also pretty sure I would be the first one to get a defective harness or rope, or that something else might go wrong.

After much deliberation and lots of begging from the kids, I finally decided to be brave. So they harnessed me up and connected me to a rope that would supposedly catch me if I fell.

My son Izzy and I crossed the first bridge. It was a six-inch wide steel beam, and I held on to the ropes on the side of the bridge with all my might. Miraculously, we got to the other side unscathed. I was very relieved.

The next bridge was made out of wooden slats with some side to side movement, but, again, I held on to the side ropes tightly, and we were fine. For the next few bridges, I was trying hard not to use the slack in my rope because I didn’t believe it could hold me.

After a few challenges, I was getting more comfortable – but nothing prepared me for what came next. We arrived at a rope bridge that had some give in it, but judging from Izzy’s easy walk across, I thought I would be okay.

The first step was fine, but the moment I took a second step, the rope under my feet sunk so low I was sure I was falling 10 feet. I grabbed on to the ropes to my side and above me, holding on for dear life. And then I had the biggest surprise. I felt myself hanging with my feet barely touching the bridge underneath me. The rope connecting me and my harness to the track above was actually holding me up, and I couldn’t fall more than the slack in my rope permitted.

And that’s when it sunk in: The rope actually was strong enough to keep me connected to the track above.

After completing the entire course, I sat down to think about what lesson I could learn in avodas Hashem, and it dawned on me: Sometimes in life we face a challenge, and our fear of the unknown prevents us from moving forward. We come up with every excuse for avoiding it. Perhaps we think we aren’t ready. Perhaps we don’t trust we can “go it alone.”

But we aren’t alone. We have an eternal connection to Hashem, and He is with us every step of the way and will always be there to catch us if we fall.

Hashem gave us 613 mitzvos that are strands in a rope that connects us to Him, and by fulfilling those mitzvos, we strengthen our connection. We may not always feel it, but it’s there.

Sometimes we forget, though, and are filled with anxiety and fear. And that’s when Hashem gives us a challenging bridge to cross. When we step on the bridge and the rope gives way beneath us, we feel the support from above holding us up and are reminded of our strong connection to Hashem. He’s truly there for us at every moment, and there’s nothing to fear. As long as we’re connected above, we won’t fall below.

Do I still have days when I’m anxious and concerned that I won’t succeed in my next project or challenge? Of course. But then I remember that as long as I’m doing what’s needed of me at that moment and am connecting to Hashem to the best of my ability, Hashem won’t let me fail. If needed, I do an extra mitzvah or I give some extra tzedakah to invest in and strengthen my connection – and then feel assured, knowing that there’s nothing to fear. 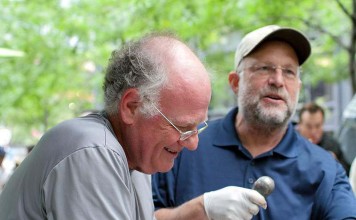