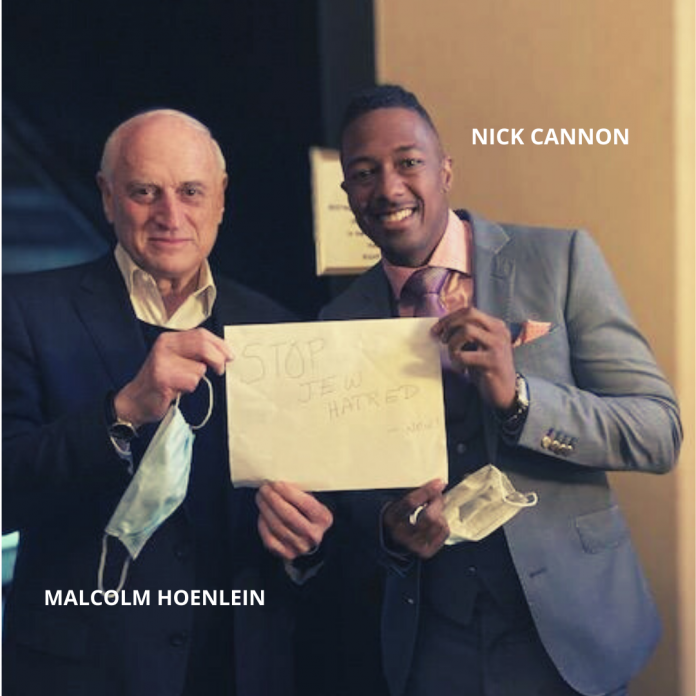 American comedian, rapper, and host of The Masked Singer, Nick Cannon, has taken another important step to atone for his recent anti-Semitic and said, “It’s time to #EndJewHatred.”

Regarding his comments this past July on the YouTube podcast, Cannon’s Class about the world “giving too much power to ‘the Zionists, the Rothschilds … the 13 families, the bloodlines that control everything even outside of America,” Cannon told me he is “determined to change a negative experience into a positive one and help to end any type of discrimination and hatred.”

Posing in a photo with his friend and supporter of the #EndJewHatred movement, Malcolm Hoenlein, EVC of the Conference of Presidents of Major American Jewish Organizations, Cannon held up a sign that read “StopJewHatred.” #EndJewHatred is a civil rights movement dedicated to ensuring Jewish liberation from centuries of persecution and achieving justice for the Jewish people through peaceful direct action.

I interviewed both Hoenlein and Canon to learn more about their friendship and find out what it has been like for Cannon on his journey.

Hoenlein describes Cannon as an intelligent, sensitive, and caring person with great affection for the Jews and Israel. The admiration between the two men is clearly mutual with the television and podcast host describing Hoenlein as a real friend. According to Cannon, friendships like the one he has Hoenlein will help “unite the black and Jewish communities. I want to help end all discrimination particularly of a community which has been oppressed so long.”

Cannon says anti-Semitism is not just a Jewish problem. It has a negative impact on our larger society and both Jews and non-Jews have an obligation to speak out against it. “We all know we know that we are part of the great collective and what happens to one group affects us all. If you see someone being hated on, it resonates in your own system and you have to say something. We are greater when we come together. When your brother is being mistreated, you must speak up for your fellow humans.”

Hoenlein has no doubt about the rapper’s capability and intention, saying Cannon “is very knowledgeable about religious issues and he sincerely wants to help.”

“We have to educate people about the Holocaust,” according to Cannon. “People have to know how it started and the severity – how horrific it was. And about what happened to Jews even before that, people have to know the history [of discrimination against Jews]. We have to give people the opportunity not to make the same mistakes. This isn’t being taught.”

Asked what do he had to say to people who have heard and have even come to believe modern day blood libel about “evil Jews” and conspiracy theories about Jews controlling the world, Cannon replied, “It’s ignorance. There is a lot of pain out there today and a lot of different narratives. People are looking to place blame for their pain. Jews have been a target of other people’s pain throughout history. They say that a lie can travel around the world three times before the truth gets out of bed. These [anti-Semitic] tropes do so much damage, cause way more division and hurt our ability to love.”

A lot has happened since his comments this past summer. Cannon was fired from the series Wild ‘N Out by ViacomCBS, met with Rabbi Abraham Cooper of the Simon Wiesenthal Center and apologized for his remarks on Twitter. Unlike several other celebrities who have made fast apologies and then drop the subject, Cannon has made it his mission to help change the world as he is changing himself. He read and praised Bari Weiss’ book How to Fight Antisemitism and has continued to speak out against anti-Semitism on his social media platforms. “I only want truth to come out of my mouth. I want to do away with untruths.”

Not surprisingly, his efforts have brought their own backlash with criticism and anti-Semitic comments on his social media pages. Cannon, however, is unfazed, “To me it just shows how much work we have left to do; the job is never done. I don’t bicker or respond to the comment section. Many people can’t explain their pain properly. I am looking to the younger generation for change, I have faith it them. The current generation can be stuck in their ways. I am looking toward the children. I want to amplify their voices.”

“God sent me on this journey,” he continues. “It’s spiritually divined that I was put in this position to unite these communities. This is a lifelong journey for me. I want to be remembered for unifying Jews and Blacks.”

Inspired by social movements around the world, EJH is committed to exposing Jew hatred and bringing accountability and consequences for the expression of Jew hatred. It is founded on the belief that a future without Jew hatred is possible if we are determined enough to create it.