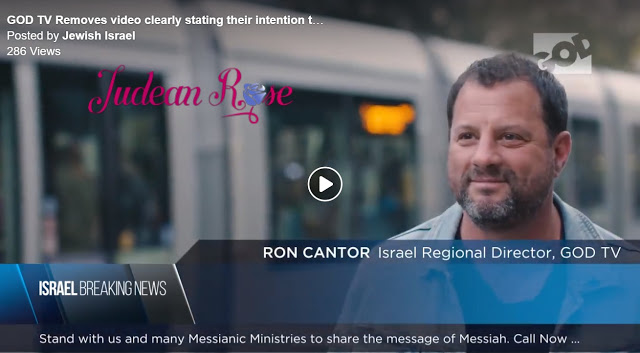 GOD TV, an evangelical broadcasting company with programming in 200 countries worldwide, launched Shelanu (Hebrew for “Ours”) TV on April 27, having snagged a seven-year contract with HOT cable television network through chicanery and misdirection. In the run-up to the launch, GOD TV CEO Ward Simpson boasted about this “triumph” on the GOD TV website, and in a video uploaded to the GOD TV YouTube channel. Simpson was positively jubilant as he described how the evangelical community had at long last, found a way to convert the “lost” Jews of Israel, bringing the message of Jesus Christ as messiah straight into Israeli living rooms, in Hebrew. It was a miracle, he said. But then the evil motives of these evangelicals and the nefarious means they used against Jewish Israelis were exposed, laid open to the Israeli public in a media blitz and BAM.

All those media pieces you saw on the subject citing the video and launch page, were now giving you errors. There was no longer any proof that Simpson had said those things: had bragged about converting the “lost” Jews of Israel and bringing them to Jesus.

Except that some people, in particular, my friend Shannon Nuszen, was already wise to these tricks of the trade, having once been an evangelical missionary herself. Today an Orthodox Jew living in Israel, Shannon works for Jewish Israel, and a key facet of her work is to preserve such materials, thus exposing the evangelicals, their unsavory methods, and their lies. The minute Shannon became aware of the launch page and video, she made copies, thus preserving them for posterity.

“Jewish Israel is, in fact, a database of exactly this sort of thing—we copy their blatant materials proving their agenda, and then report on it. Because as soon as a report like this hits the media, the site goes down, and all of a sudden a newly carefully worded site goes up looking KOSHER,” said Shannon. “Of course they deny everything in our original report, except that we always follow up with screen shots and pdfs of their previous site. It’s always the same MO, with all of them.”

“I downloaded the video because I fully expected the original video, posted by God TV, to be taken down as soon as trouble started.  I knew to expect this because I was once a missionary myself.  I am a ger, a convert, and have been living as an Orthodox Jew for the past 15 years.

“Much of the media coverage on the issue links to the original 15-minute video by God TV that is now no longer available, leaving these stories with a dead video link,” said Nuszen.

Why put up the video in the first place? As Shannon put it, “The video was removed because it was never meant to be seen by Jewish people.”

Short version of the video that was taken down:

Commenting on the above (copied and documented) GOD TV video, Gavriel Sanders, a former evangelical missionary minister said he finds it particularly unsavory that Simpson speaks of “lost Jews” that need Jesus to save them. “That’s not Christian education—that’s proselytizing,” says Sanders.

Shannon was flabbergasted when she discovered that these missionaries had wangled a seven-year contract to preach the gospel on TV to Israeli Jews. “How this received government approval is beyond me, and hopefully this is a mistake that will be rectified immediately. This is an assault on every Jew. An attack on Judaism itself.”

Exactly what kind of people engage in this sort of sneaky business, anyway? Rabbi Tovia Singer, of Outreach Judaism explains that the people who make it their business to evangelize the Jewish population of Israel are fundamentalist evangelical Christians. “They secured the Shelanu TV station on HOT TV, and the way they operate—their MO—is to blur the distinctions between Judaism and Christianity, in order to lure Jews who would otherwise resist a straightforward message. The plan, in their own words, is to evangelize 9 million Israelis, using the HOT TV channel and of course, GOD TV.

“When they say “9 million Israelis,” that means everyone. That’s as many people who are here. As it turns out, however, that’s not legal in Israel. You’re not allowed to evangelize minors in this country.

“But to speak to the way they speak—it’s a double speak,” says Singer. “To one audience, they’re very clear. To the non-Jewish evangelical Christian audience, who they want to raise money for this massive project, they put up that video, which in very plain words, expresses their intent on converting the Jews, young men and women, the elderly, to Christianity. That wasn’t meant for Jewish consumption. That was meant for their own supporters, primarily in the United States, who want to see the Jews here in the Holy Land, convert to Christianity.”

Singer shared with this writer a communications card that is used by missionaries to train evangelicals on how to “witness” the Jews. It’s included in their training manual materials. The communications card tells missionaries to say “Yeshua the Messiah” rather than “Jesus Christ.” When speaking to Jewish people, the card tells them, “Don’t say, ‘Come to church,’ but rather ‘Come to a Messianic congregation.’ Don’t say ‘Christian,’ say ‘Believer in the messiah’ or ‘Messianic Jew.’” 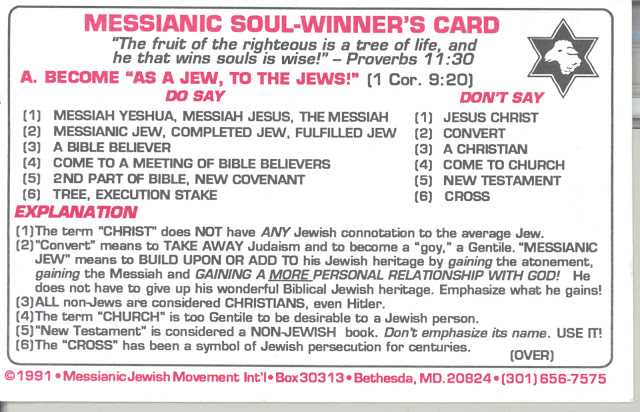 “That’s what they’re planning to do with GOD TV and Shelanu TV in particular,” explains Singer. “They’re notorious for using Jewish symbols, icons, and liturgy. It’s a war on the weakest of all people. In fact, they say it straight out: we want to bring this to the young, we want to bring this to the elderly. And they want to do it in the native Hebrew language, which they clearly state, has never been done before.”

Shannon Nuszen has seen it all before. She grew up on this stuff. “It is not uncommon to hear Christian supporters of Israel profess their love for the Jewish people, and deny that they have any intention to proselytize while in the Jewish State. Yet, if you were to see these same Christians speaking in churches around America you’d hear something completely different. Among themselves, they are free to take their masks off.”

Rabbi Singer calls Shelanu TV, “A very aggressive project. To seize and use HOT cable—which is in the homes of some 700,000 Israelis—to witness to the Jewish people. Their view on their part in this is if the Jews en masse in the Holy Land are converted to Christianity, this would enable Jesus to make a second coming. So their press now, more than ever, is to bring back the second coming of Jesus,” says Singer who explains that this belief is based on a passage in Matthew 23:39 which evangelists interpret to mean that Jesus cannot make a second coming unless the Jews convert to Christianity en masse.

“Hot, of course, should completely nullify this agreement because this particular station was supposed to be educational. The license was not given to them for the purpose of converting people to Christianity.”

The good news is that Likud MK David (Dudi) Amsalem, who heads Israel’s Ministry of Communications is working to drive Shelanu TV out of business, fast. Here’s a rough translation of his Hebrew statement:

“We will not allow any missionary channel to operate in the State of Israel, under any circumstances.

“It is important to note that the Cable and Satellite Council is an independent and sovereign body which makes its own decisions, but as soon as I learned of this case, I immediately contacted the chairman of the Cable and Satellite Council to launch a thorough and comprehensive investigation into the matter, ensuring that no channel violates the terms of its license, and that the channel in question will be removed immediately.

Shannon Nuszen, in her capacity as a board member of Jewish Israel, on the other hand, was never fooled. She has spent years monitoring missionary activity in Israel, and has helped the organization amass an extensive database of websites, screen shots, and videos of the internal communications of missionaries. These are always taken down after they are found by Jewish organizations that expose their agenda. That’s why she began a concentrated effort to copy the GOD TV materials as soon as she uncovered them. And she knew, right away, that something underhanded was afoot. And it was. “If God TV had applied for a license using the description for its programming in the same way they did in that fundraising video, I do not believe they would have been granted the right to broadcast on HOT TV.”

The moral of the story? Let the cable TV buyer and just regular Jewish Joes on the (Israeli) street beware. Because you’re not just paranoid. These (sneaky, underhanded) evangelists really are out to get you.