This Ongoing War writes, “The opinions of Palestinian Arabs are, to a great extent, a puzzle.”

Are the opinions of Israeli Arabs any less a puzzle?

For example, in July 2012, The Israeli website The Marker, (a Hebrew-language daily business newspaper published by Haaretz) featured the headline:

60% of Israeli Arabs define themselves as Palestinians

But then, right below it:

However, 80% also consider themselves Israeli

How does that work?
(Note: translations by Google Translate)

The article quotes the results of a study by Prof. Sammy Smooha and Zohar Lichtman on the effects of a year of civil service on Arab participants. They looked into the results of a survey by Adalyah Economic Advisory that showed that Arab civil service volunteers are satisfied with their year of service and say it has been very helpful to them.

Smooha and Lichtman found that when it comes to how Israeli Arabs define themselves:

Looks clear enough.
But if you mix and match the numbers, you can get the contradictory results of the headline:

This data, as Samucha points out, can be read in two ways. It can be read that “60% of Israeli Arabs define themselves as Palestinians”; And they can also be read as “80% of Israeli Arabs incorporate Israelis into their identity”. The choice between half full glass and half empty glass can be made by anyone.

Just 2 years later, in January 2014, Haaretz itself ran an article on what it claims is the failure of the attempt to integrate Israeli Arabs into society. It again features Prof. Sammy Smooha, of the Sociology Department at Haifa University. This time Smooha is using different data and describes the self-identification of Israeli Arabs this way:

Using the same mix and match approach, the article concludes:

The numbers here are a little different, but the ability to combine them to reach contradictory conclusions remains.
But even without combining results, some of Smooha’s findings seem self- contradictory.

On the one hand:

Anyone following Smooha’s surveys knows that the position held by Israeli Arabs towards the state has become more extreme over the years. It is doubtful the Jewish majority knows that 67% of the country’s Arabs believe Israel is a racist state, only 36% accept it as a Zionist state, only 47% believe it has the right to exist as a Jewish and democratic state, or that 53% support having a strong Muslim force in the Middle East to restrain Israel, and that 63% support the development of nuclear weapons by Iran.

But on the other…

63% of the country’s Arabs believing it would be good if Arab and Jewish citizens continue to coexist here, and 60% to 70% supporting Israel’s right to exist as a Jewish and democratic state where Arabs and Jews live together. These findings indicate clear support for a constitution establishing Israel’s status as Jewish and democratic, with the Arabs’ status being defined as that of citizens with equal rights. Fully 60% accept Israel’s existence as a Jewish state with Hebrew serving as the dominant language and culture.

Surprisingly, the Arabs even think Israel should aspire to turn more towards Western culture than that of the Arab Middle East. And perhaps most surprising of all, they express affection towards their country: 58% believe Israel is a good place to live and 55% would prefer living in Israel than any other country in the world. [emphasis added]

Still, Haaretz is not the only left-wing source that marshalls data indicating an increase in Israeli-Arabs identifying with Israel.

Perhaps following the ratification of the Jewish Nation-State Law, some of the respondents in the 2019 poll were more fearful, and sought to appease the poll with their answers. Disclaimers aside, one thing is clear: there is no evidence of a trend in the opposite direction.

One advantage of this poll is that it distinguishes between identifying as “Palestinian” vs “Arab.” On the other hand, their breakdown makes it difficult compare the results with the other 2 polls. What the first 2 polls refers to as “Arab-Palestinian” — does that really correlate to “Palestinian” in this survey? To a combination of “Palestinian” + “Arab”?

To add to the confusion, now there is a new poll out by the Jewish People Policy Institute that seems to show that the percentage of Israeli-Arabs identifying as Palestinians has dropped sharply: 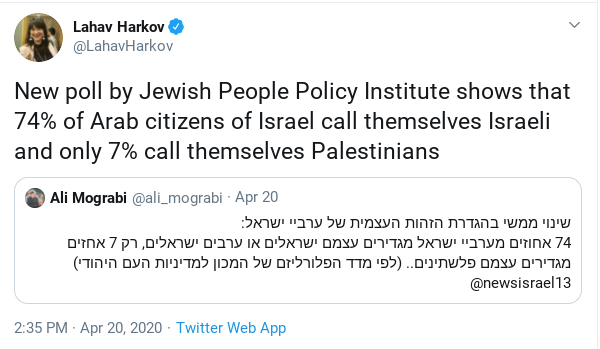 According to the survey, conducted by Prof. Camille Fuchs of Tel Aviv University, about a quarter of Israeli minorities (23%) define themselves primarily as “Israeli” and half (51%) self-identify as “Israeli-Arab.”

The proportion of non-Jewish people who define themselves primarily as “Palestinian” now stands at around 7%, down from 18% this time last year.

Moreover, there was a sizable increase in the number of Arabs who define themselves as Israeli – that number rose from 5% last year to 23% this year. [emphasis added]

Without the actual results of the survey, the results still remain unclear.

The numbers add up to 81% — leaving the question of what other options were available to choose from.

Also, is it accurate — as the tweet says — that 74% of Israeli Arabs see themselves as Israeli, when the 23% component seeing themselves only as “Israeli” are defined as coming from “Israeli minorities,” which would apparently include those who are neither Jews nor Arabs?

All this all makes it impossible to do an apples-to-apples comparison.

But if we were to make a table comparing the 4 surveys, using the 74% number, it might look something like this:

We will have to wait for JPPI to publish the results so that we can see what choices were offered to the respondents, and what kind of mixing and matching might have been done to reach its results.

The fact that Arabs in Israel can identify as Israelis, Arab-Israelis, is a sign of some success in the integration of Arabs into Israeli society — success that can only be accomplished by providing equal rights and opportunities.

But more remains to be done.

And then there are the Palestinian Arabs. 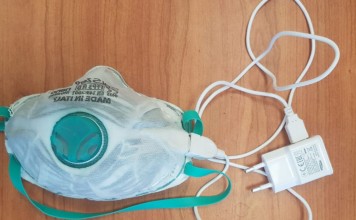