The decision by the Jewish weekly newspaper The Forward to publish a paid advertisement supporting imprisoned Palestinian terrorist Marwan Barghouti is being questioned by some editors of other American Jewish newspapers.

The full-page ad appeared in The Forward’s June 2 edition. It was sponsored by Jewish Voice for Peace (JVP), a controversial organization that supports the BDS movement and is described by the Anti-Defamation League as the largest “Jewish anti-Zionist group” in the U.S. The ad featured a statement by Barghouti calling for more privileges for jailed terrorists, and charging that Israel’s arrest and prosecution of Palestinian terrorists is “unlawful” because it constitutes “forcibly transferring Palestinian civilians into captivity.”

The ad also included an illustration of Barghouti flashing a V-for-victory sign beneath the slogan, “Palestine Will Be Free.”

In a “Note to Our Readers” on The Forward’s editorial page, Publisher Rachel Fishman Fedderson wrote that when the ad was submitted, “it gave us pause” because JVP’s text identified Barghouti only as the leader of a recent 40-day hunger strike by Palestinian terrorist prisoners, without noting he was convicted of murdering five Israelis.

The Forward’s official advertising policy states it will not accept an ad if the text is “intentionally misleading or contains known false statements.” JVP Media Coordinator Naomi Dann told JNS.org that The Forward “had no issues” with the content of the ad. While JVP was not asked to change the text, The Forward did require it to include a disclaimer which stated, “The views printed here are not intended to represent those of The Forward.”

Fedderson explained in her note to The Forward’s readers that “despite our reservations,” she and her colleagues decided to publish the ad because “mass media itself is on the firing line, and freedom of expression is under pressure from our own government.”

Yet some other editors disagree with the argument that free speech is the issue.

“Freedom of expression is indeed a vital American value, one that this publication cherishes,” Sue Fishkoff, editor of J. The Jewish News of Northern California, told JNS.org. “But it has nothing to do with whether or not a publication chooses to run a particular ad. While I respect The Forward’s decision to accept this ad, we at J. would not have.”

In view of Barghouti’s murder convictions, “an ad supporting his hunger strike” would be “antithetical to our mission,” Fishkoff said.

“Like The Forward, the Detroit Jewish News believes that freedom of expression is of paramount importance in times like these. But our first concern is for our readers, who would be greatly offended by this particular ad,” said Jackie Headapohl, the newspaper’s managing editor. “If it were submitted to us, we’d suggest that Jewish Voice for Peace place this ad somewhere else.”

Several editors said they reject certain types of advertisements. Alan Smason, editor of the online Crescent City Jewish News, told JNS.org he would not accept an ad supporting a “convicted murderer,” or an ad that was “lacking in truth or potentially libelous.” David Portnoe, editor of the New Jersey Jewish Community Voice, said he has rejected ads “that target Jews for conversion.”

Rob Eshman, publisher and editor-in-chief of the Jewish Journal of Greater Los Angeles, said his newspaper refuses ads “from groups that advocate or incite violence, racism [or] conversion out of Judaism,” or ads that are “too sexually explicit.” While declining to say if he would have accepted the Barghouti ad because the question is “hypothetical,” Eshman added, “I think The Forward is a great Jewish newspaper with a long legacy of service to the Jewish community and the world.”

Dovid Efune, editor-in-chief of The Algemeiner, said there is “no amount of money that could convince us to run an ad like this. Frankly, it’s disgraceful. Hiding behind the freedom of expression concept, The Forward has engaged in a shocking abdication of moral judgement…The Constitution doesn’t guarantee the right to terrorists to be provided a platform by leading Jewish newspapers.”

Robert Cohn, former editor of the St. Louis Jewish Light and current co-chair of the American Jewish Press Association’s Committee on Ethics and Professional Standards, told JNS.org that if the question of the Barghouti ad “was brought to our committee, I might question the judgment of one who accepted such an ad, but would not want to be in a position to censure the publisher. If someone like [former Ku Klux Klan leader] David Duke wanted to place an ad, I would consider that to be crossing a line.”

Several other editors likewise raised the question of whether The Forward would accept an advertisement from other extremist groups. “If you substitute any other minority for ‘Israel’ or ‘Jews,’ I seriously doubt The Forward or another Jewish periodical would publish an ad advocating their annihilation or glorifying those who do,” said Ed Weintrob, editor and publisher of The Jewish Star of Long Island, N.Y.

“Would The Forward, in the interests of ‘freedom of expression,’ accept ads from white supremacists? To ask the question is to answer it,” Jason Maoz, senior editor of The Jewish Press of Brooklyn, told JNS.org.

Asked by JNS.org if The Forward would publish an advertisement from supporters of an imprisoned killer who targeted other minorities, such as Dylann Roof (perpetrator of the South Carolina church massacre) or Jeremy Christian (who was arrested in the recent Oregon train killings), Fedderson did not directly address the question, but reiterated that the newspaper “is dedicated to free speech within and beyond the Jewish community” and is “also committed to equal advertising access.”

Barghouti, a leader of the Palestinian Fatah movement’s Al-Aqsa Martyrs’ Brigades terrorist organization, was convicted in 2004 of masterminding the murders of Jerusalem motorist Yula Hen; Father Georgios Tsibouktzakis, a Greek Orthodox priest; and three Israelis who were killed in an attack at Tel Aviv’s Seafood Market restaurant. He was also found guilty of an attempted suicide bombing in Jerusalem’s Malha Mall. Barghouti did not contest the charges, but instead delivered a speech in court accusing the judges of being as bad as “those who drop bombs on Palestinian children.” 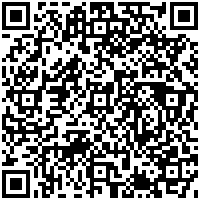