Journalists: From Servants Of Democracy To Servants of Truth…

…To Activists For A Cause


In 2013, former New York Times editor Bill Keller published a “conversation” with Glenn Greenwald, whom he described as “an advocate of a more activist, more partisan kind of journalism.” In explaining how he does journalism differently, Greenwald complained that

this suffocating constraint on how reporters are permitted to express themselves produces a self-neutering form of journalism that becomes as ineffectual as it is boring…all journalism is a form of activism. Every journalistic choice necessarily embraces highly subjective assumptions — cultural, political or nationalistic — and serves the interests of one faction or another. [emphasis added]

For that matter, how far will you be willing to go to stretch a point (or two)? After all, it’s for the cause.

Another consideration is that, as an activist dedicated to a cause, journalists are susceptible to the pressures of other members of the cause, who now feel free to criticize your statements, and expect you to toe the line.

That would explain how newspapers publish headlines that do not just give an idea of the story, but actually tilt the story.

In a recent post, I reviewed biased headlines that twist stories of attacks by Palestinian terrorists. I gave 2 examples where it took not one but 3 headlines in order to get the story straight.

But now, in the course of the past year, we have seen news stories in the US where The New York Times has felt obliged to rewrite its headlines multiple times — by public, or political, demand.

Assailing Hate But Not Guns

But this is not a one-time occurrence.

When Trump threatened that he was ready to bring out the military as riots spread throughout the country in reaction to the police killing of George Floyd — The New York Times reported with the headline:
As Chaos Spreads, Trump Vows to ‘End It Now’
Opposing the neutrality of the headline, Democrats condemned it as not sufficiently anti-Trump. So The New York Times obliged:

However, a personal best was probably achieved earlier this year, in March. Within the space of an hour, The New York Times produced 4 different headlines as it desperately tried to satisfy Democrats. The story was about the stalled coronavirus relief bill. The problem was how to write the headline so as not to be too harsh on the Democrates.

Democrats Block Action on $1.8 Trillion Stimulus  (that of course would never do)

Partisan Divide Threatens Deal on Rescue Bill (it’s not the Democrats! No, it’s that darned ‘cycle of partisanship’ we hear so much about…)

The New York Times Outdoes Itself

But the latest headline gaffe, also last week, is having major reverberations.

Since then, there have been multiple explanations, excuses, denials and James Bennet resigned as The New York Times Opinion Editor.

As the paper itself admits in the ‘contextual’ comments that now introduce the op-ed (sort of a warning label) it was The New York Times itself that created the headline — not Senator Cotton. And the paper admits that the headline they chose is “incendiary”.

But that admission hasn’t stopped The New York Times from continuing to mischaracterize what Cotton wrote: 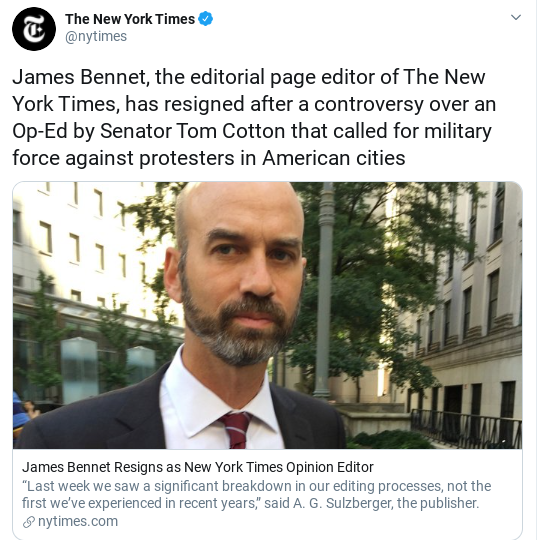 The point is that contrary to the headline and what The New York Times claims in the above tweet, Senator Cotton did not “call for military force against protesters in American cities.”

What he did write is advise the use of the military to either back up and support the outnumbered police and National Guard or help out where elected officials have refused to take any action where violent riots have broken out. This would be accomplished by invoking the Insurrection Act, which in the past has been used by both Republican presidents as well as by presidents Kennedy and Johnson.

Whether one agrees or disagrees with this opinion piece, the headline chosen was neither neutral nor accurate, and apparently was intended to provoke a reaction. 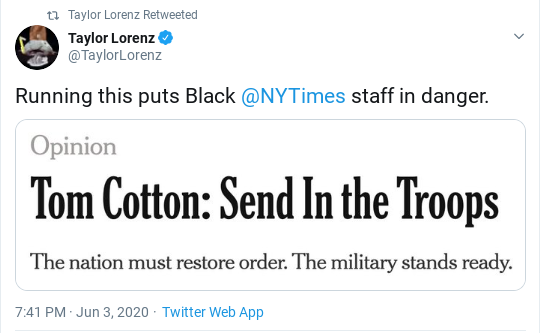 You would have to stop reading at New York Times headline, without reading what Senator Cotton actually wrote, in order to claim that Blacks — or anyone for that matter — would be put in danger. Yet among New York Times reporters there were 800 staff members who signed a letter condemning the op-ed. Then, of course, there are other members of the media and social media, and politicians who have joined in to help spin this out of control.

After all, how many people actually read beyond the headlines?

But it is important to keep in mind that the headline manipulation in this case is different from the others mentioned above.The other headline manipulations, as shown by the subsequent changes, are meant to soften the blow and play down what is reported in the article itself.

But in the case of the Cotton op-ed, the headline was meant to deliberately provoke. It was inaccurate and designed to influence in advance how the reader would understand the op-ed itself. Previous posts have looked at examples of New York Times bias when it comes to Israel as well as bias against Jews.

The manipulation of headlines and the distortions in dealing with the Senator Cottom op-ed are problems we are familiar with from The New York Times reporting on Israel.

And to tell you the truth, when James Bennet tweeted proudly, if not boastfully about the “patriotic protests”… 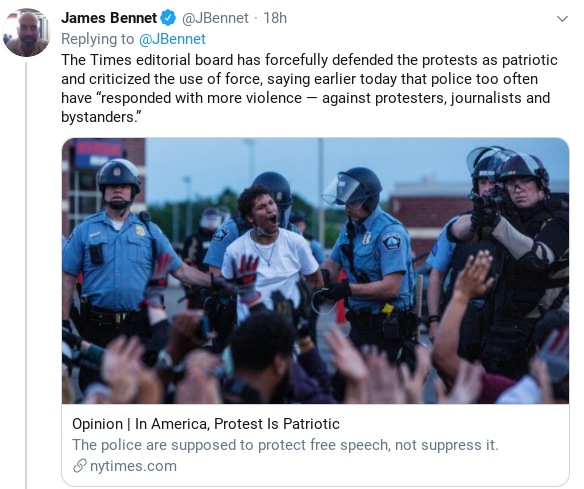 …we also remember the insistence of The New York Times on reporting on violent Gazan riots on the border with Israel as “peaceful protests,” even as attempts were made (and some, successfully)  to infiltrate into Israel.

In the current situation, you don’t have to minimize the tragedy of the killing of George Floyd or deny the validity of the protests in order to take note of the cases of violence and the need to deal with them and report on them accurately. 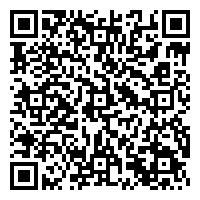