Several processes familiar to Europeans have taken hold with ferocity in the US:

Many more examples could be cited. Fundamentally, the issue is a matter of a left-wing technocratic ruling class exerting power using new rhetoric regarding “hate,” race, and gender.

A haphazard re-engineering of America is taking place at breakneck speed. The apparent goal is a low-cohesion, low-trust (as well as low-growth and low-innovation) European-style social democracy with a large dependent class, presided over by a permanent government overseen by an expert class of technocrats and ideologues devising top-down solutions to problems both real and invented. That this is the antithesis of representative democracy and the utter undoing of American tradition could not be more apparent. Nor is the fact that this process is managed by a technocratic left-wing oligarchy that has a near total grip on the country’s institutions, including government, media, education, and corporations.

The right-wing reaction, a predictable byproduct of rapid marginalization of groups and values, seen in the outrageous January 2021 Washington riots (falsely deemed an ”insurrection”) and even more shocking outbreaks of interpersonal violence, is welcomed by the ruling class as confirmation of the immoral and irredeemable nature of the “deplorables.” So too is pervasive (and deliberately under-reported) left-wing political violence from the anarcho-communist Antifa movement as well as conventional (and rapidly growing) criminal violence, primarily emanating from the black community, against itself and others—most recently, Asian Americans.

Left-wing and criminal violence is increasingly justified as a means to combat the vague notion of “white supremacy,” alternately construed as a matter of “race,” the country’s Euro-American heritage and populations, or generalized capitalist power structures. In these, Jews and Asians are increasingly—if incoherently—classified as “white adjacent” as a function of skin color, prosperity, or simply adherence to aspects of traditional culture, such as family. The deliberately extended climate of emergency has allowed the administration and its allies to expand their controls over the economy through the inaptly construed “economic stimulus”; manipulate institutions, such as primary and secondary education, where the concept of merit is being expunged, a process also seen in the military through one-sided political indoctrination and purges; and generally root out deep racial animus and suspicion throughout society.

Top-down machinations of this kind have long been part of Europe’s political DNA. Since WWII the veneer of democracy has been thin. The rational exclusion of most communists and fascists from most political systems was the first step and has now been completed by the gradual expunging of national sovereignty by the imperial European Union. Right- and left-wing violence was common in Europe during the 1970s and 1980s but has now been almost completely overtaken by ongoing Islamist violence that is simply accepted as the price of segregated multi-ethnic societies, where national authorities have given up control over enclaves. Similar processes— the creation of no-go zones—are unfolding in the US: Portland’s endpoint is an American version of Molenbeek.

American democracy is still robust, as is demonstrated in part by the growing rejection of restrictions by states that have managed the pandemic and their economic recoveries better than others. This variable pattern is among the reasons why ruling elites are proposing a variety of dramatic changes, including registering illegal aliens to vote, federal control of local elections, and the end of the Electoral College, which gives small states and thinly populated regions the ability to resist dictates from the densely settled coasts.

But with all political discourse filtered through the prism of race, and accusations of racism constantly leveled to marginalize opponents and seize power, the situation is grim. European-style hopelessness is already taking hold, with self-censorship and declining birth rates two leading manifestations.

More broadly, as American culture and history are being torn down and replaced with racialized narratives, trust in institutions is at a new nadir and national identity and identification are in decline. Patriotism is sneered at and dismissed. As a racialized America is partitioned into classes and enclaves, few ideals are on display. The much-heralded “equity” is largely a means of seizing power and exacting retribution. But the risk of communal violence is real, as are the economic consequences of cheap labor, high deficits, high unemployment among under-educated university graduates, and ever-higher taxes.

The European experience shows that treating the nation state as a cursed condition does not remove the need for responsible governance and a growing economy, and that imperial politics exercised from the center, whether Brussels or Washington, is guaranteed to fail. Denial of real crises even as imaginary ones are fought is the worst of all approaches. Still, unlike Europe, America’s vast class structures are not hundreds of years old and there are scattered signs of self-correction.

But a country in a state of moral panic makes a poor ally. That should temper whatever schadenfreude is currently being enjoyed abroad, particularly in European capitals. The removal of Trump’s pressure and the deep-seated anti-American resentment of the European elites (who now blame the importation of US-style “wokeness” for local unrest) have suddenly produced realignments with China to complement longstanding energy dependence on Russia. Atlanticist sentiments notwithstanding, sooner or later America will realize that these allies are not what they seem, and that their models of deracination, dependence, and decline are not ones to be emulated. The resulting American realignment will reverberate globally. 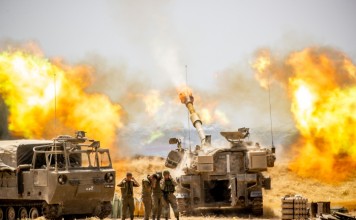