I understand the mindset of the Israelis who came to the defense of the BDS movement in response to Germany’s anti-BDS resolution.1 They remind me of the Palestinians in Gaza who come to the defense of the terrorists of Hamas in response to Israeli activity against them. Although there are important differences between the two, the similarity in mindset is profound and clearly evident.


Those who stand on the roof of a building in Gaza, seeking to hamper Israel’s efforts to defend itself against the terrorists operating within the building, are not terrorists. They are not there to kill Israelis themselves. They are there to express a basic identification with the terrorists, with their goals, and with the violent, terrorist means that they employ. When they are there, they hamper the struggle against terror and thereby strengthen terror, and they become participants in the danger that terror creates for the soldiers and civilians of Israel.

Those who come to the defense of the BDS movement in response to Germany’s resolution are not anti-Semites. They do not do so to discriminate against Jews, whether in Europe or the United States. They do so to express a basic identification with a movement that is sullied by anti-Semitism, with its goals and with the malevolent, anti-Semitic means that it employs. When they take a stand there, they hamper the struggle against the new anti-Semitism and thereby strengthen it, and they become participants in the danger that anti-Semitism creates for Jews and for all aspects of their lives.

Why the BDS Movement Is Immoral

Identification with the BDS movement is immoral for other reasons as well. First, the movement’s goal is to cause economic, cultural, and political damage to all the people of Israel. This is an impervious identification that has no qualm about the simple, blind infliction of harm. Second, it is a cowardly identification that shows no hint of courage to stand, in comparable situations, against China or Russia.

And third, it is a hypocritical identification that shows no sign of being prepared to stand against the United States, which, during President Trump’s tenure, has been Israel’s main backer in an unprecedented fashion. If the BDS movement had solid ideological principles, it would call on its supporters to boycott the United States, divest from it, and sanction it. It will never do so because that is not a basic feature of anti-Semitic behavior.

Conclusions should also be drawn from the unrealistic nature of BDS activity. Essentially this activity has been rich in funding and meager in achievements. Rational organizations draw lessons from the ongoing failure of their activity. Well-funded ideological organizations do not cease to operate even when they have no real accomplishments to show for their frenetic activity; displaying the ideology, even if entirely futile, is their paramount concern.

BDS activity continues because what its instigators want is an ongoing display of the new anti-Semitism that encompasses – even if the achievements are negligible – the past, the present, and the future. Such movements do not need achievements to justify the way in which they flaunt themselves. They exist to flaunt themselves. Helping them means abetting the ongoing, ceaseless display of the new anti-Semitism.

A moral evaluation of the BDS movement must also include an evaluation of its attitudes toward its partners in the struggle. There is no point in denying the commonality of goals between the activity of this movement and the terror activity of the organizations operating on Israel’s borders to the north, south, and west. These groups enjoy the unambiguous support of Iran, a hostile power that is blatantly anti-Semitic. Activity in the main part of this mosaic of activities cannot stand separate from what occurs in other main parts of this mosaic. The effort to defend the movement against Germany’s resolution is complicit with, indirectly but unmistakably, Iran’s anti-Semitic effort against Israel’s existence and the terrorist effort of Hamas and Hizbullah toward the same purpose. 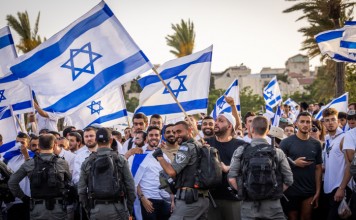