The following is adapted from Vice President Pence’s address to the Knesset earlier this week:

In the story of the Jews, we’ve always seen the story of America. It is the story of an exodus, a journey from persecution to freedom, a story that shows the power of faith and the promise of hope.


My country’s very first settlers also saw themselves as pilgrims, sent by Providence, to build a new Promised Land. The songs and stories of the people of Israel were their anthems, and they faithfully taught them to their children, and do to this day. And our founders turned to the wisdom of the Hebrew Bible for direction, guidance, and inspiration.

America’s first president, George Washington, wrote with favor to “the children of the stock of Abraham.” Our second President, John Adams, declared that the Jews, in his words, “have done more to civilize man than any other nation.”

Down through the generations, the American people became fierce advocates of the Jewish people’s aspiration to return to the land of their forefathers, to claim your own new birth of freedom in their beloved homeland.

The Jewish people held fast to a promise through all the ages, written so long ago, that “even if you have been banished to the most distant land under the heavens,” from there He would gather and bring you back to the land which your fathers possessed.

Through a 2,000-year exile, the longest of any people, anywhere, through conquests and expulsions, inquisitions and pogroms, the Jewish people held on to this promise, and they held on to it through the longest and darkest of nights. A night that transformed the small faces of children into smoke under a silent sky. A night that consumed the faith of so many and that challenges the faith of so many still.

We marvel at the faith and resilience of a people who, just three years after walking beneath the shadow of death, rose up from the ashes to resurrect themselves, to reclaim a Jewish future, and to rebuild the Jewish state.

And this April, we will mark the day the Jewish people answered that ancient question – can a country be born in a day, can a nation be born in a moment? – as Israel celebrates the 70th anniversary of its birth.

But last month President Trump made history when he announced that the United States will finally acknowledge Jerusalem is Israel’s capital.

The Jewish people’s unbreakable bond to this sacred city reaches back more than 3,000 years. It was here, in Jerusalem, on Mount Moriah, that Abraham offered his son, Isaac, and was credited with righteousness for his faith in God.

It was here, in Jerusalem, that King David consecrated the capital of the Kingdom of Israel. And since its rebirth, the modern state of Israel has called this city the seat of its government.

Jerusalem is Israel’s capital. And, as such, President Trump has directed the State Department to immediately begin preparations to move the U.S. Embassy from Tel Aviv to Jerusalem. In the weeks ahead, our administration will advance its plan to open the United States Embassy in Jerusalem, and that United States Embassy will open before the end of next year.

Our president made his decision, in his words, “in the best interests of the United States.” But he also made it clear that we believe his decision is in the best interests of peace. By finally recognizing Jerusalem as Israel’s capital, the United States has chosen fact over fiction. And fact is the only true foundation for a just and lasting peace.

Under President Trump, the United States remains fully committed to achieve a lasting peace between Israelis and Palestinians. In announcing his decision on Jerusalem, the president also called “on all parties to maintain the status quo at Jerusalem’s holy sites, including at the Temple Mount, also known as the Haram al-Sharif.”

And he made it clear that we’re not taking a position on any final status issues, including the specific boundaries of Israeli sovereignty in Jerusalem or the resolution of contested borders.

President Trump also reaffirmed that, if both sides agree, the United States will support a two-state solution.

Now, we recognize that peace will require compromise, but the United States will never compromise the safety and security of Israel. Any peace agreement must guarantee Israel’s ability to defend itself by itself.

Winds of change can be witnessed across the Middle East. Longstanding enemies are becoming partners. Old foes are finding new ground for cooperation. And the descendants of Isaac and Ishmael are coming together in common cause as never before.

Last year, in Saudi Arabia, President Trump addressed an unprecedented gathering of leaders from more than 50 nations at the Arab Islamic American Summit. He challenged the people of this region to work ever closer together, to recognize shared opportunities and to confront shared challenges. And the president urged all who call the Middle East their home to, in his words, “meet history’s great test — [and] conquer extremism and vanquish the forces of terrorism together.”

Together with our allies, we will continue to bring the full force of our might to drive radical Islamic terrorism from the face of the earth.

Thanks to the courage of our armed forces and our allies, at this very moment ISIS is on the run, its capital has fallen, its so-called caliphate has crumbled. And we will not rest, we will not relent, until we hunt down and destroy ISIS at its source, so it can no longer threaten our people, our allies, or our very way of life.

The United States and Israel have long stood together to confront the terrible evil of terrorism, and so we will continue. And across the Middle East, Arab leaders have responded, as well, to the president’s call with unprecedented action to root out radicalism and prove the emptiness of its apocalyptic promises.

As President Trump made clear in Saudi Arabia, we will continue to stand with our allies and stand up to our enemies. We will work with all of our partners to starve, in his words, “terrorists of their territory, their funding, and the false allure of their craven ideology.”

And we will help persecuted peoples, who have suffered so much at the hands of ISIS and other terrorist groups. To this end, the United States has redirected funding from ineffective relief efforts. And, for the first time, we are providing direct support to Christian and other religious minorities as they rebuild their communities after years of repression and war.

The U.S. has already committed more than $110 million to assist Christians and other religious minorities across the wider Middle East. And we urge our allies – here in Israel, in Europe, and across the world – to join us in this cause, to work together to restore the rich splendor of religious diversity across the Middle East, so that all faiths may once again flourish in the lands where they were born.

As we work to defeat the scourge of terrorism, and give aid to those who have suffered at its hands, we must also be resolved and vigilant to prevent old adversaries from gaining any new ground.

To that end, the U.S. will continue to work with Israel, and with nations across the world, to confront the leading state sponsor of terror – the Islamic Republic of Iran.

That dangerous regime sows chaos across the region. Last year alone, even as its citizens cried out for help with basic necessities, Iran devoted more than $4 billion to malign activities in Syria, Lebanon, and elsewhere across the region. It has supported terrorist groups that even now sit on Israel’s doorstep. And worst of all, the Iranian regime has pursued a clandestine nuclear program, and at this very hour is developing advanced ballistic missiles.

The previous U.S. administration signed a deal with Iran that merely delays the day when that regime can acquire a nuclear weapon. The Iran nuclear deal is a disaster, and the United States will no longer certify this ill-conceived agreement. At President Trump’s direction, we’re working to enact effective and lasting restraints on Iran’s nuclear and ballistic missile programs.

Earlier this month, the president waived sanctions on Iran to give the Congress and our European allies time to pass stronger measures. But as President Trump made clear, this is the last time.

Whatever the outcome of those negotiations, the United States will never allow Iran to acquire a nuclear weapon. Beyond the nuclear deal, we will also no longer tolerate Iran’s support of terrorism, or its brutal attempts to suppress its own people.

Last year, our administration more than tripled the number of sanctions targeting Iran and its leaders. And just this month, the U.S. issued tough new sanctions on Iran.

But I have another message from the people of America to the proud and great people of Iran: We are your friends, and the day is coming when you will be free from the evil regime that suffocates your dreams and buries your hopes. And when that day finally comes, the friendship between our peoples will blossom once again.

How unlikely was Israel’s birth; how more unlikely has been her survival. And how confounding, and against the odds, has been her thriving. The desert has been turned into a garden, scarcity into plenty, sickness into health, and hope into a future.

Today and every day, the Jewish state of Israel and all the Jewish people bear witness to God’s faithfulness, as well as their own.

It was the faith of the Jewish people that gathered the scattered fragments of a people and made them whole again; that took the language of the Bible and the landscape of the Psalms and made them live again. And it was faith that rebuilt the ruins of Jerusalem and made them strong again.

The miracle of Israel is an inspiration to the world. And the United States is proud to stand with Israel and her people, as allies and cherished friends. 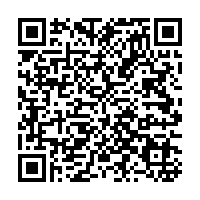