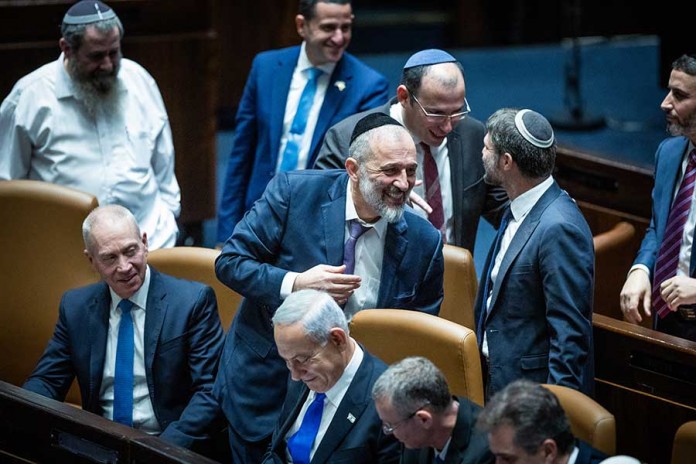 A new government, baruch Hashem, has been sworn in to govern the state of Israel. I am thrilled that the party I have voted for several times is finally in power, positioned to accomplish great things for the future of Israel and the Jewish people. The previous, illegitimate governing coalition of extreme leftists, anti-religious activists, Arabs, Netanyahu haters, and a party that “democratically” turned its back on explicit campaign promises is no longer. The enemies of Torah who were part of that coalition have been stripped of their power.

The new government is by far the friendliest to Torah and traditional Jewish values in the 75-year history of the state. Comprised of only the Likud party and religious parties, it has far more kippah-wearing (and women hair-covering) members of Knesset and ministers than ever before. While this is certainly something to celebrate, it is also cause for great concern.

The reasons to celebrate are obvious. It is not only because of legislation likely to be more friendly to traditional values and a much-needed shot in the arm that religious communities – particularly in Judea and Samaria – will receive. We celebrate what has been apparent to anyone living recently in Israel: the silent majority of the country is moving toward a more traditional/religious approach to life. To be sure, there are still many staunchly secular and even anti-religious people in Israel, many of whom are gnashing their teeth as they decry “the end of democracy,” or “the rise of fanaticism” and so on. But, despite all of their noise, they are becoming a minority due to the growing acceptance of traditional values, the high birth rate among the religious and, unfortunately, the high rate of emigration by secular Israelis who no longer live in Israel.

In addition, the country has moved politically firmly to the right. It includes not only the largest party (Likud) and the religious parties. The truth is that even among the opposition, several parties exist mainly because of their hatred of charedim or of Benjamin Netanyahu (not unlike “Never Trump Republicans). These parties have right-wing views on matters like the “peace process” (which virtually no one in Israel believes is possible anymore), dealings with the Palestinian Authority, opposition to “wokeism” and other extreme leftist positions, and so on.

All this is for the good. Jews in the Diaspora ought to take note of these developments, which in my view give the lie to many of the excuses they give for not moving to Israel. How many times have I heard the claim that it is more challenging to be a religious Jew in Israel than in Borough Park and Flatbush? I won’t pursue that discussion here. I merely note that the times are changing, and those excuses no longer hold much water.

Given all this, I should be euphoric about what has occurred and be able to say with a whole heart, “Shehecheyanu v’kiymanu lazman hazeh.” But, nevertheless, I am uneasy, and it has to do with the confluence of the great severity of chillul Hashem and Lord Acton.

I don’t know what else he’s famous for, but Lord Acton is renowned for formulating the principle that “power corrupts, and absolute power corrupts absolutely.” This law has held true almost without fail in human history: Even when good and fine people come into positions of great power, they forget themselves and begin acting in a corrupt, arrogant and oppressive manner just because they can. That is undoubtedly one of the lessons we should have learned from Chanukah. Unfortunately, with all our admiration for the Hasmoneans, it turned bad quickly; their end was terrible and corrupt.

I can’t imagine it will get that bad. But I worry that our religious representatives may forget the delicate balance it takes to win hearts and minds to our perspective. I recognize how angry and frustrated the not-yet-religious Israelis feel as they see that – to their minds – the country is being taken away from them. As they see it, secular Zionists, the fighters of the IDF, and the significant advances in technology, agriculture and science have built Israel into the wonderful modern country it is. From their perspective, the institutions that they built with so much blood, sweat and tears are being taken over by those who do not respect their values and way of life and (to their mind) do not share the burden of paying taxes and serving in the army. Of course, much there is untrue, but it is partially true. I can only hope and pray that those who are now in power will not forget to treat everyone with kindness and respect and to recognize that the ways of the Torah are those of pleasantness and not of coercion.

An example of the dangers that lurk came up even before the new government was sworn in – in its attitude toward “LBGTQ rights.” I strongly agree that this is an issue that the new government should address in due course. The growing encroachment of gender dysphoria in the Holy Land, the annual “gay pride” march in the holy city of Jerusalem, and the fact that, year after year, Tel Aviv has the distinction of being voted the most gay-friendly city in the world are nothing short of a chillul Hashem.

However, even before the government took power, religious representatives and some rabbis decided that this was the time to go to war against the gay community. It is one thing to be against the gay pride march in Jerusalem. It is something else entirely for an incoming minister to state that she is for the right to discriminate against gay people who come to a hospital for medical care or to be teachers, even of secular subjects, or to discriminate against them in business. Several prominent rabbis have even protested that the incoming speaker of the Knesset is gay and publicly shouted against him.

Many other examples have arisen. For instance, it is one thing to seek exemptions for the draft for those studying Torah full time (although, as the number of such people approaches hundreds of thousands, this blanket policy is debatable). But then, to demand that those studying should be paid more than soldiers who fight in the army is particularly offensive to many religious and secular Israelis alike. These and other issues continue, and they haven’t even started governing yet.

I worry that rather than seeing the new government as a golden opportunity to show the beauty of the Torah, power will be used in ways that are seen as uncaring coercion, magnified as such by the hostile secular press. I worry that this unprecedented opportunity for kiddush Hashem may turn out to be a cause of chillul Hashem.

I worry about this not only for those who live in Israel. The staunchly liberal and not Orthodox majority Diaspora Jewish communities have lost no time in decrying the “awful, fascist, fundamentalist, xenophobic” new government. Five hundred rabbis have already signed a letter stating that members of the Israeli government are not welcome in their temples and have pressured the Biden administration to look harshly upon the new government.

While there is little that individuals can do about that, every Orthodox Jew, both in Israel and the Diaspora, needs to be very aware that – more than ever – non-Orthodox Jews feel under attack and alienated and disparaged, for this is what their leaders are telling them. They are looking to confirm their prejudice that Orthodox Jews are corrupt, mean-spirited, and bullying and seek to delegitimize the non-Orthodox as Jews. Therefore, it is crucial that all of us be extra vigilant in being stellar examples of the beauty, light and kindness that the Torah teaches us and not, G-d forbid, the opposite.

History seems to be progressing ever more powerfully toward some great vortex in which the Jewish people, the land of Israel, and religious Jews are under attack. Many sources say that these conditions are a harbinger of the coming of the Mashiach, as we all fervently hope. In the meantime, we must heighten our resolve – and up our game – to be worthy of the arrival of the Mashiach and not, G-d forbid, to misuse this tremendous opportunity. 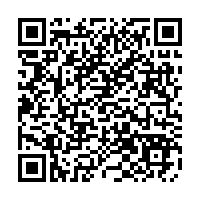