Worldwide antisemitism is getting worse, with a spike in expressions of Jew-hatred and attacks on Jews, reminiscent of levels during the years leading up to the Holocaust.

Not so long ago, this seemed to be mostly an issue for European Jews.
Not any more.

In the US, during the past couple of years especially, antisemitism has boiled over from college campuses to social media, to public figures and Congressional representatives.

Antisemitism on the right makes headlines — the violence that accompanies it ensures that it makes the news.
Islamic antisemitism still escapes scrutiny, and kneejerk cries of “Islamophobia!” effectively deflect criticism.
Meanwhile, antisemitism on the left is still denied outright.

Over the past months, reports of attacks on Chasidic Jews appear regularly on Twitter, often accompanied by video revealing that African Americans are behind the attacks.
This goes against the narrative.

That was the problem in Crown Heights in 1991 during the riots.

Former New York Times journalist Ari Goldman wrote in 2011 about what it was like trying to report on what was happening during those riots. He describes it as a case of Telling It Like It Wasn’t, where he witnessed journalism “go terribly wrong.” The media insisted on framing the violence as a two-sided “racial conflict” between Blacks and Jews — ignoring the pervasive antisemitism behind the riots themselves:

In all my reporting during the riots I never saw — or heard of — any violence by Jews against blacks. But the Times was dedicated to this version of events: blacks and Jews clashing amid racial tensions. To show Jewish culpability in the riots, the paper even ran a picture — laughable even at the time — of a chasidic man brandishing an open umbrella before a police officer in riot gear. The caption read: “A police officer scuffling with a Hasidic man yesterday on President Street.”

Today, the relationship between The New York Times and the Jewish Community continues to be problematic.

Last year, The Algemeiner published a collection of posts by Ira Stoll from 2016 to 2018 on anti-Jewish and anti-Israel bias in The New York Times. Entitled “The New York Times and The Jews”, the book is divided into chapters such as “Double Standards,” “Jerusalem” and “Iran.”

There is also a chapter devoted to “Hasidim.”

Or as Stoll notes elsewhere:

Is there any group of people who the New York Times feels comfortable insulting as openly and easily as Orthodox Jews?

In that piece, he quotes a New York Times article complaining that:

A history of pandering to the ultra-Orthodox in Brooklyn goes back at least to the days of Mario M. Cuomo…According to a 2011 study by the UJA-Federation of New York, the Jewish philanthropic organization, just 11 percent of Hasidic men and 6 percent of Hasidic women in and around New York City hold bachelor’s degrees, while the poverty rate among Hasidic households stands at 43 percent, nearly twice the figure citywide.

Similarly, while the article makes a point of mentioning Satmar’s geographic roots:

the Satmar, its name taken from the Hungarian town of Szatmar, where Rabbi Teitelbaum had fought to resist the encroachments of a modernizing society. Subsequent decades have seen virtually no retrenchment in the sect’s mistrust of the larger world.”

— there is no attempt to show the connection between that “mistrust” and the Holocaust.

One of the comments to Stoll’s article notes that The New York Times refers to the Satmar having “immigrated to the United States, colonizing a section of Williamsburg in Brooklyn for his Hasidic sect” That kind of language is unlikely to be used with other immigrant groups.

In another article, Stoll notes how the New York Times Obsessively Cheerleads for Those Exiting Orthodox Judaism. While the topic itself is reasonable and “those struggling with their transitions in life certainly deserve compassion and support” — The New York Times itself appears fixated on the topic:

At no point is proof offered that suicide rates are higher among Orthodox Jews than non-religious Jews — in fact studies indicate the opposite.

More to the point:

If the Times finds individual religious transitions so newsworthy, one wonders, why doesn’t it write more about people leaving other religious traditions — say, people struggling to abandon Catholicism, or Mormonism, or Islam? Or why doesn’t it write, in the same sympathetic and supportive and non-skeptical tone, about people unhappy with their secular upbringing who are finding meaning and happiness by becoming religious Jews?

Instead the newspaper obsesses over the formerly Orthodox Jews.

In The New York Times Tries Explaining Its Flawed Crusade Against Yeshivas, the issue is the criticism of Yeshivas:

39 yeshivas were violating state law by not providing students, particularly boys, an adequate education in secular subjects like English, math and science.

Stoll contacted the paper and wanted to know why no one defending the schools was quoted in the story. When an editor answered his question, they did not say it was because no one responded to their request for comment.

They just didn’t think a comment from the Yeshivas themselves was necessary:

We saw this as an article about the city and the status of the investigation, so when we went to get comment, we went to the subject: the city.

In Jewesses Bathing in Public Pools? New York Times Editorial Writers Can’t Stand the Stench, Stoll notes the double standard comparing Orthodox Jews and Muslims. A June 2016 New York Times editorial describes the idea of providing women-only hours at a public swimming pool in Williamsburg, Brooklyn as a “strong odor of religious intrusion into a secular space.” Yet, he points out, a February 2016 article just a few months earlier actually praised a Toronto pool offering women-only hours for Muslims as “a model of inclusion”

During 2019, Stoll has not highlighted New York Times articles targeting religious Jews — but Jews in general have been singled out.

Stoll notes that a New York Times article deliberately entitled, “A Leading Jewish Philanthropist Is Accused of Sexual Harassment” had triggered complaints because of the gratuitous mention of a Jewish philanthropist. The headline in the online version of the article instead identifies the subject as “a leader in Jewish philanthropy.”

Similarly, in Useful Idiots and Trumpist Billionaires Paul Krugman calls out Trump fundraiser Stephen Ross for his support for what Krugman takes for granted is a racist:

Ross is Jewish — and anyone Jewish has to be completely ignorant of history not to know that when bigotry runs free, we’re always next in line for persecution.

In fact, the ingredients for an American pogrom are already in place.

Personally, I’m not hosting any fundraisers for Trump. But, unlike Krugman, neither am I Jew-shaming any of my fellow Jews who choose to do so.

Of course, if anything stood out in The New York Times this year when it came to reporting on Jews, it was this cartoon: 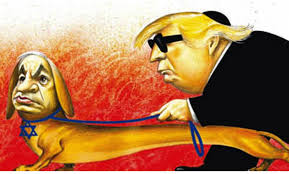 — featuring a gratuitous kippah on Trump’s head, no mean feat for someone who is supposed to be both antisemitic and a racist.

The only thing more stunning than the poor taste The New York Times showed in allowing such a cartoon to begin with, was their claim when they finally got around to apologizing for the cartoon.

More than a few people were left scratching their heads when The New York Times claimed, “We have been and remain stalwart supporters of Israel.”

That was quite an odd claim, considering the fact that it is not even clear The New York Times is a stalwart supporter of Jews in general.

This is not to say that The New York Times is single-handedly encouraging antisemitism. They did not create the problem.

But The New York Times has shown that it is part of the problem.