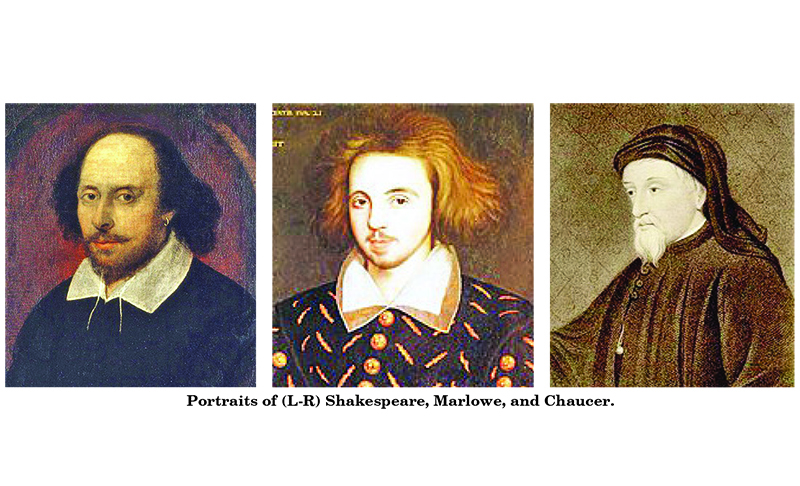 Geoffrey Chaucer (1343-1400) is the author of The Canterbury Tales, a collection of 22 stories, mostly written in verse; Christopher Marlowe (1564-1593) was a renowned playwright, poet, and translator; William Shakespeare (1564- 1616) is perhaps the most famous writer of all time, having authored approximately 39 plays and 154 sonnets.

What do these three writers have in common? They all depicted Jewish characters as extortionate money-lenders or tax gatherers; haters of the Christian savior; cowards; murderers of Christian children; and clannish in nature. Their Jewish characters also use grotesque gestures and posses unpleasant odors, speech impediments, outlandish noses, and red hair.


(Why red hair? Apparently, this stereotype originated from the story of The Last Supper in which Judas, a red-head, betrayed the Christian savior.)

Jews had been exiled from England by royal decree in 1290 – and didn’t return until the mid 17th century – so it is unlikely that Chaucer, Marlowe, or Shakespeare ever encountered a Jew, let alone was on familiar terms with one to know his or her idiosyncrasies. The Jews these authors depicted, then, were mythical characters, archetypes of the devil who evoked fear and hatred. When actors played a Jew on stage, they wore a red wig, an extended nose, and distinctive clothing and gestured grotesquely. The audience was expected to boo, hiss, and ridicule.

In Chaucer’s Canterbury Tales, a fictitious senior nun – who is supposedly endowed with the values of the church but whose morals tell quite a different story (she illegally keeps pet dogs in the church, feeding them the finest meats while people on the street are dying of starvation) – relates the “Prioress’s Tale.” The tale involves a boy called Hugh of Lincoln who in 1255 walks through a Jewish ghetto. Hugh is so nervous that he sings Christian hymns, which incenses the Jews, who proceed to murder him.

After stabbing him and extracting his blood, they throw his body into a pit. His distraught mother searches everywhere for him, but obviously cannot find him. Miraculously, though, the dead boy starts to sing, which leads his mother to his body. The Jews wind up being hanged for their crime.

This fable reinforces the medieval blood libel of Jews murdering Christian children and extracting their blood for Passover. But it may not mean that Chaucer was an anti-Semite. If Chaucer had depicted the Prioress as a moral woman, her words would have to be valued, respected, and taken seriously. But Chaucer depicts her as a vain, silly, superficial, superstitious, naïve, and unintelligent woman. A story told by such a person is not meant to be taken seriously. Indeed, it is likely that Chaucer used the Prioress to satirize members of the church who did not abide by the rules of their faith.

Christopher Marlowe wrote several tragedies, including The Jew of Malta. The plot concerns an alien, a wealthy Maltese Jewish merchant, Barabas, who is rounded up with other Jews by the governor of Malta. The governor owes money to the Turks and wants to extract the sum from the Jews. They are given the choice to forfeit half their wealth or convert to Christianity. Barabas refuses to do either, so the governor confiscates all his property.

His house (containing his fortune) is converted into a convent. Barabas asks his daughter, Abigail, to pretend to become a nun so she can retrieve the money from his house. Subsequently, she is misled by her father to coerce two Christian suitors (including the governor’s son whom she loves) into a duel during which both die. Abigail then flees to a convent to become a nun.

Barabas, feeling deceived, orders his slave to poison the entire nunnery including his daughter. Prior to her death, Abigail discloses her father’s actions to two friars and asks them to convert him. The friars pretend to be pious on their mission but are only interested in Barabas’s money. Barabas murders both friars and ultimately dies as a result of his own treachery.

Marlowe’s Barabas is a melodramatic villain who lives up to every major medieval anti-Jewish stereotype: he is greedy, he despises Christians, and he kills Christians.

Shakespeare’s The Merchant of Venice is similar to The Jew of Malta. Both narratives are about alien, crafty, wealthy Jewish money-lenders who are consumed by material greed. They plot against Christians and seek revenge against them; their daughters are pursued by gentiles; they murder using poison; both are asked to convert.

The Merchant of Venice centers around Shylock, a wealthy Jewish money-lender who is approached by a merchant, Antonio, and a friend for a loan. Antonio is the guarantor. Shylock, who has been treated with scorn by Antonio asks him:

You, that did void your rheum upon my beard, and foot me, as you spurn a stranger cur…What should I say to you? Should I not say, ‘Hath a dog money? Is it possible a cur can lend three thousand ducats?, or shall I bend low, and in a bondman’s key, with ‘bated breath, and whispering humbleness, say this – ‘Fair sir, you spit on me on Wednesday last; you spurn’d me such a day; another time you call’d me dog; and for these courtesies I’ll lend you thus much moneys?’

Antonio arrogantly replies that he’d do it again and does not seek friendship, only money.

After agreeing to loan him money, Shylock sets a condition: If Antonio defaults on the loan, the penalty will be a pound of flesh from his body. Meanwhile, Shylock’s daughter, Jessica, steals her father’s money and her late mother’s jewelry and elopes with a Christian lover.

Ultimately, Antonio cannot repay Shylock’s loan on the appointed date, so Shylock demands his pound of flesh. As Antonio is tied up, ready for Shylock to cut his skin, Shylock is informed by a lawyer at the ceremony that an “alien” (referring to Shylock) who seeks a citizen’s life will lose half his wealth to the state and the other half to the victim. Shylock is caught by surprise when the lawyer also states that the pound of flesh he intends to incise from Antonio’s body must weigh exactly a pound and be taken without shedding a drop of blood.

Furthermore, in one portion of The Merchant Of Venice, Shakespeare very much humanizes Shylock. In one of Shylock’s replies to Antonio, he says:

One literary critic has stated that this speech “must have shocked Elizabethan audiences to the core.” Through Shylock, Shakespeare actually evokes sympathy towards Jews.