I’ve spoken to several very chassidishe women who have never driven a car or worked and who had children before they were 20 years old. They all felt content in their role as homemaker. In more Modern Orthodox families, women often have a very different view on their proper role in life.

The position of Judaism, however, is clear: Men and women are equal, with separate responsibilities.


Unfortunately, some people believe there is a battle between the sexes in Judaism. They argue that women are prevented from participating in prayer and learning like men do. Yet, throughout all of the generations, the Torah’s approach has always been that the woman is the single most highly valued person in the family. That’s why we call a home a “bayis” – which is a feminine noun. It’s the woman who makes the home.

In fact, according to Judaism, women are endowed with a greater degree of binah (intuition, understanding, intelligence) than men. Was it not our foremother Rivka – not her husband – who received divine prophecies about her children?

The Gemara (Yevamos 62a) states, “A man must treat his wife with the greatest respect, honoring her more than himself.” Our holy Rabbi Akiva told his students, “All that I and you have achieved is due to my wife” (Kesubos 63a). The Gemara (Niddah 45b) says that Hashem gave greater powers of understanding to women than to men. Tradition also teaches that women did not participate in the sin of the golden calf or that of the spies.

Given these statements, it’s pretty hard to label Torah Judaism as sexist. Yet, questions do abound. For example, why can’t women wear tefillin, or lein from the Torah, or become a pulpit rabbi?

The great Rabbi Shimon Schwab, zt”l, once noted that women can learn Shas all day long, yet it will accomplish very little in terms of their spiritual growth because they have already been endowed with the greatness Shas gives a person. There’s a reason men – not women – commit 90 percent of all murders globally. Women are, simply put, possess a higher level of holiness than men.

One has to wonder about the intentions of some Jewish women who insist they be given a greater role. I know a lady who insists on making the hamotzi on challah Friday night even though that’s traditionally done by the man of the home. She explained that she has a burning desire to act in this manner even though she isn’t strict about keeping Shabbos.

Yet, nowhere in the Torah does G-d say, “Please feel free to ignore whatever laws you want while focusing on others that are more meaningful to you.” G-d knew all too well that His laws could not be subjected to man’s whimsical nature. Otherwise you’d have people saying, “Today I love Shabbos, but next week, I have to go to see Bruno Mars live at the Garden!”

G-d makes the laws. It’s not our place to decide which commandments we want to observe.

But if halacha isn’t her motive behind saying the berachah on challah, what then? Perhaps a desire to be on an equal footing with men? Yet, in that, she fails to appreciate her – and their – role. Should a man feel sad at not being able to nurse? Should a woman feel inferior because her physical strength is generally inferior to a man’s?

Sadly, rather than appreciate the unique differences that actually unite us, some have created a divide that need not exist – and all because of a fundamental misunderstanding of men and women’s distinct roles in this world.

To deny the clear difference between men and women – not just in appearance – but in every conceivable way, along with their unique missions in this world is, to quote Koheles, not “rooted in wisdom.” Books like Men Are From Mars, Women Are From Venus – which has sold over 15 million copies – line bookshelves the world over. Articles have been written since the beginning of time highlighting these differences, and many a comic have made a great living noting them too.

All are equal but not identical. Rav Ari Shvat notes that the grass and the trees, the birds and the lions, and gentiles and the Jews all have different spiritual needs and mitzvot, and each should be proud – not jealous – of its job in the harmonious rainbow called creation.

Imagine for a moment being sent out to fight a war. There are armed men on the front lines and there is a group of code crackers sitting in comfortable air-conditioned offices trying to decipher messages. One day, the top code cracker, Elias – who saves countless lives with his unique abilities – begins to feel marginalized and unappreciated. He approaches his superior and explains his desire to feel more like a real soldier, asking if he can come to work in a full army uniform along with a sidearm and grenades.

Confused, his superior explains to him that while it’s not forbidden, it would serve absolutely no purpose. “Unlike the guys on the front line who need guns and heavy artillery to win the war, your mission requires you to outwit the enemy – not with guns, but with your brains and talent. Carrying a gun, in your case, would be senseless, not too mention cumbersome.”

The question we have to ask ourselves is: Is the code cracker interested in winning the war by utilizing his talents? Or is he more interested in satisfying his personal agenda, quite possibly jeopardizing the war?

We all have our respective roles in this world. No one’s role is more or less important than the next person’s. 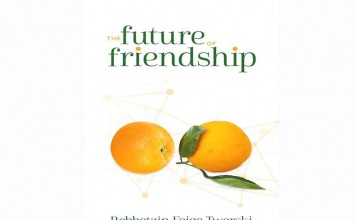 On Friendship And More