As soon as I heard that the anti-Semitic Congresswoman Rashida Tlaib was going to be speaking at an event at Rutgers University – which is home to one of the largest Jewish student populations in the country – I decided I would confront her.

I decided I would demand an apology from her for spreading the dangerous blood libel that Jewish settlers had thrown a Palestinian child into a well and murdered him. Like every blood libel, this allegation has been thoroughly debunked – but not before it went around the world and found a home in many angry minds.

The event, hosted by Muslims for Peace, was held on Sunday on the subject of migrants and refugees according to Islamic doctrine. I got there and presented my credentials from The Jewish Press, but was told the event was closed to press.

Luckily, I had registered to attend as a private citizen and was allowed in along with four members of my organization, Americans Against Antisemitism. We sat through three hours of imams, doctors, professors, and performers who spoke and sang about unity, universal love, and inter-communal connectedness. Beautiful messages, indeed.

They said nice things about Jews and didn’t mention Israel except, ironically, when speaking of Moses leading the Bnei Yisrael out of Egypt.

The last speaker was Rep. Rashida Tlaib. I had been sitting about eight rows back but saw an open seat in the second row and went forward to seize it. Moments later, as Rashida was speaking on how “we need to be there for our allies from other communities.” I got up to confront her and, almost immediately, a man wearing a Palestinian keffiyeh grabbed my arm. I told him to refrain from touching me unless he was looking for trouble.

He let go, and I then asked Tlaib, “What about your anti-Semitism? What about your blood libel?” Several policemen surrounded me a moment later and led me out of the room. By now, the video of this saga has gone viral, and millions of people have seen how Rashida provided no answer and showed no remorse over her raging anti-Semitism.

Some people have asked me, “Why bother? What’s gained by confronting her?” My answer is that the loss in allowing a notorious anti-Semite to go unchallenged in an environment that’s becoming increasingly hostile to Jewish students would be tremendous.

Will Tlaib stop being an anti-Semite? Most certainly not. Do Jews feel empowered to stand up to fight for their safety and justice because of what I did? Considering the feedback I’ve received, the answer is a resounding “Yes.”

We cannot react to hate with silence. If we do, we become complicit in it. 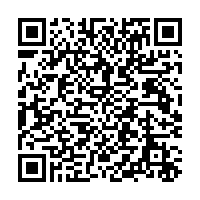