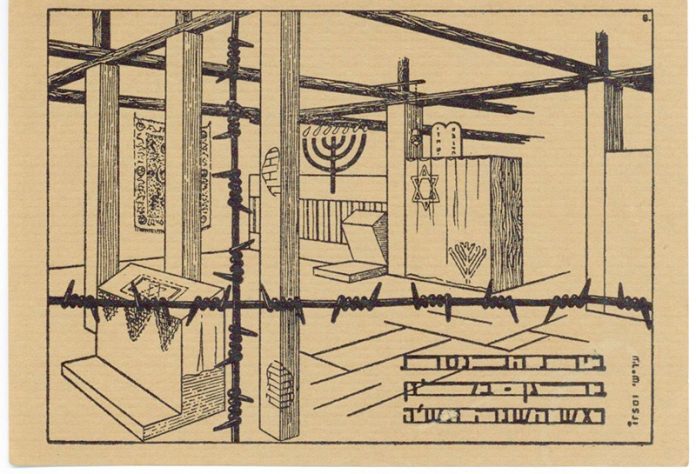 Rosh Hashanah greeting cards constitute one of the most popular areas of Jewish document collecting. They provide a religious, political, social, cultural, and artistic map of Jewish history and practice through time and wherever Jews have resided. (For example, see my Sept. 4, 2015 Jewish Press front-page essay, “Shanah Tovah Cards and the First Zionist Congress.”)

In fact, sending Rosh Hashanah cards has been a Jewish custom for at least several centuries.


It’s instructive to note that as far back as the Middle Ages, the Maharil, Rabbi Jacob Moellin, the spiritual leader of German Jewry, wrote in his seminal work, Minhagei Maharil, that during the month of Elul all correspondence should include the blessing “May you be inscribed and sealed for a good year.”

Similarly, the Maharal of Prague, Rabbi Judah Loew, ruled that all correspondence written during the Yamim Noraim must begin with “L’shanah tovah tikatevu vetechatemu.”

The use of pre-printed cards is a relatively recent phenomenon, with the earliest appearing in the late 1800s. Picture postcards with Rosh Hashanah greetings began circulating at the beginning of the 20th century. Today, according to the Greeting Card Association, more than 12 million Rosh Hashanah cards are distributed in the United States.

My focus here is on a class of unique and particularly poignant cards from my collection, Rosh Hashanah greeting cards sent from Europe during the Holocaust and in its immediate aftermath. Most of these cards were hand-drawn and, as such, uniquely reflect the thoughts of writers extending holiday wishes from the depths of hell.

Greetings sent by Jewish servicemen stationed in Europe during World War II comprise an interesting sub-category of this class of cards. They often took the form of “V-Mail Service” cards that were artistically customized to carry Rosh Hashanah greetings. Shown here is one of the nicer examples from my collection, a beautiful 1945 hand-drawn V-Mail letter from Italy depicting an American soldier in his uniform and wearing a tallit. He is shown holding his firearm in one hand and blowing a shofar with the other, a portrayal of the dual nature of the American Jewish serviceman as both patriotic American and faithful Jew. The inscription on a scroll-like design extends Happy New Year wishes in both Hebrew and English.

V-mail, short for “Victory Mail,” was a hybrid mail process developed by Eastman Kodak and used by Americans during the Second World War as the primary and secure method to correspond with soldiers stationed abroad. To reduce the cost of transferring an original letter through the military postal system, a V-mail letter would be reviewed by censors, photographed, and transported as a thumbnail-sized image in negative microfilm. Upon arrival at their destination, the negatives would be blown up to 60 percent of their original size and printed.

According to the National Postal Museum, “V-mail ensured that thousands of tons of shipping space could be reserved for war materials. The 37 mail bags required to carry 150,000 one-page letters could be replaced by a single mail sack. The weight of that same amount of mail was reduced dramatically from 2,575 pounds to a mere 45.”

This saved considerable weight and bulk at a time in which both were hard to manage in a combat zone. Another important benefit of the V-Mail system was that it prevented espionage communications by foiling the use of invisible ink, microdots, and microprinting, none of which would be reproduced in a photocopy.

Shown here are two dramatic, similarly themed, and lovingly rendered cards, both in the style of the official card issued for the Fifth Zionist Congress (Basel, December 26-31, 1901) originally drawn by Zionist artist Ephraim Moshe Lilien. Both strikingly illustrate an old, sad Jewish man behind the barbed wire that keeps him from the dream of the Promised Land; an angel wearing a Magen David directs his attention across the horizon to Eretz Yisrael. In the first card, “The Jew’s Hope,” which is actually a precise copy of Lilien’s original drawing, a Jewish farmer in the background tills his land as he walks toward the setting sun. The legend underneath reads “May our eyes behold Your return to Zion with mercy,” a verse many will recognize from the thrice-daily Amidah prayer. In the second card, dated “Bayern, the 1st of Tishrei, 1946,” the angel directs the old Jew’s attention to a beautiful land where Jewish pioneers are planting trees with the setting sun depicted as a Magen David bearing the title “Zion.” An interesting change from Lilien’s original has the Jew leaning on a globe, perhaps suggesting the world’s indifference to his plight.

The Bayern Refugee Camp was located about four kilometers from the town of Ansbach, Germany. In 1946-47 – encompassing the time of our card – this United Nations Relief and Rehabilitation Administration (UNRRA) camp housed approximately 300 children in two buildings, the first for Habonim Dror and the second for Hashomer Hatzair.

In both instances, one can only imagine the emotional impact this artwork had on refugees of the Holocaust waiting to emigrate to Eretz Yisrael.

Shown here is a dramatic handwritten card featuring one of the most stunning depictions of the confluence of Rosh Hashanah, Holocaust, redemption, retribution, and messianic themes. Drawn by an unknown Jewish prisoner in a concentration camp and somehow hidden and later discovered, it is surely a Holocaust survivor even if the writer/illustrator was not. At the upper left, the artist depicts a group of Jewish concentration camp prisoners in striped clothes surrounded by barbed wire, with three verses from the High Holiday prayers around them. The sign on top reads “and [God] remembered his covenant [with the Jewish people];” next to the prisoners, he has written “and He counts and enumerates” [from the renowned U’netaneh Tokef prayer]; and beneath their feet is the legend “before comes the Great Day,” an allusion to Malachi 4:5 and to the onset of the Messianic Era: “Behold, I will send to you Elijah the Prophet before the Great and Awesome Day of the Lord.”

To the right is a dramatic drawing of a bird of prey carrying a skull and crossbones beneath which is written God’s promise from Yoel 3:21 to punish those who shed Jewish blood –“I will avenge their blood.” To the bottom left is a depiction of an uninhabited land with an excerpt of Jeremiah 2:2, expressing Hashem’s love for the Jewish people:

Go, and cry out in the ears of Jerusalem saying: So says Hashem, I remember for you the affection of your youth, the love of your betrothal, how you went after me in the wilderness, in an unsown land.

At the bottom, the artist has drawn a bouquet of flowers and included the greeting “L’shanah tovah tikatevu vetechatemu.” Taking in the gestalt of this original and historic card leaves one almost breathless.

On April 15, 1945, the British 11th Armored Division liberated the notorious Bergen-Belsen concentration camp, then under SS control, where approximately 50,000 people had died, including Anne Frank and her sister Margot. After freeing some 60,000 survivors, the British burned down the entire camp a few weeks later to prevent the spread of typhus.

Soon after, the British established a displaced persons camp that housed more than 12,000 survivors in a German military school barracks at Celle, a town near the original concentration camp site. In September 1945, however, the British decided to transfer the DPs back to Bergen-Belsen. While the majority agreed to return, about 600 elected to lose their special privileges as DPs and remain in Celle.

Under the leadership of Rav Israel Moshe Olevsky, the DPs in Celle had applied to the municipal authorities in June 1945 and were granted recognition as a Jewish community, which allowed them to reclaim community property, including the old Celle synagogue that had been built in 1740 and damaged on Kristallnacht. The group, comprised mostly of chassidic survivors, rebuilt much of the synagogue, including the rough and simple bimah and the steps to the ark, out of boards salvaged from the ruins of buildings bombed by the Nazis. Shown here is a stunning card by graphic artist István (Pesach) Irsai (1896 – 1968) illustrating the Bergen-Belsen synagogue as it appeared during the first Rosh Hashanah after the liberation of the camp.

Irsai, one of the greatest masters of modernist-constructivist poster art, began his career as a violinist in Hungary but after sustaining injuries serving during World War I, studied architecture at the Technical University of Budapest and became a graphic designer. In 1925 he made aliyah to Eretz Yisrael where he was hailed as the yishuv’s leading graphic artist. He took a serious interested in typography and developed the first modern Hebrew font, the Chaim; he also joined the foundation of the first Jewish theatres in Eretz Yisrael, for which he designed mobile stages.

He also designed signets, emblems, and other graphic works for Jewish and Israeli institutions; his approach, which was original and visionary at the time, was to create a comprehensive corporate identity for his clients to be presented on every single poster, leaflet, and ad.

Irsai returned to Hungary (1930) where he became renowned as a modernist poster and graphic artist before being deported on the Kasztner train to Bergen-Belsen. But he worked out a deal with Kasztner that saved him from the camp. Instead, he was sent to Sweden. In 1945 he again went to Israel, settling in Tel Aviv. He would go on to design some of the most important propaganda posters for the new state. The Jewish Brigade, comprised mainly of Jews from Eretz Yisrael, was the only military unit to serve in World War II as an independent national Jewish military formation. The establishment of the brigade was the final outcome of prolonged efforts by the yishuv and the Zionist movement to achieve participation and representation of the Jewish people in the war against the Nazis.

During World War II, Jews were dispersed throughout the British army. In 1940, battalions of Jews from Eretz Yisrael, who continued to engage primarily in guard duties in the “Palestine Regiment,” demanded that they be permitted to participate in the fighting with the right to display the Jewish flag. As more information came to light about the Holocaust, the British yielded to Zionist demands and in September 1944 established the Jewish Brigade, which consisted of Jewish infantry, artillery, and service units. After a period of training in Egypt, the Jewish Brigade Group – approximately 5,000 soldiers – participated in the final battles of the war on the Italian front before being moved to Northeast Italy in May 1945.

The brigade was disbanded by the British in the summer of 1946. But the military experience and training gained by its soldiers played an important part in Israel’s War of Independence and served as a powerful symbol of hope for the renewal of Jewish life in Eretz Yisrael. The brigade also was instrumental in bringing many Holocaust survivors to Eretz Yisrael via “illegal” immigration.

Finally, in the words of the Maharil and the Maharal, I wish a “L’shanah tovah tikatevu vetechatemu” to all.